Natural Gas Price Forecast for H2 of 2020: Bullish Short/Mid-Term, Heading for Doomsday in the Long Term

Just like crude oil, natural gas prices were on a long term bullish trend until the middle of the previous decade, as the demand for energy products kept increasing. Natural gas topped at $16.50 in December 2005, although buyers attempted the top side once again, falling short at $14.30 during H1 of 2008. The pressure has been on the downside since then, with gas falling to less than 10% of the value, compared with the high in 2005. The world is changing and the consciousness has been shifting from fossil fuel to renewable energy, which has lowered the demand for all fossil energy products. Producers and investors are aware of the increases and declines in demand, so they adjust the output and invest in projects to balance the supply according to the demand. However, the long term trend looks bearish, and fundamentals are also bearish, which means that the downside pressure will continue in the longer term, despite the reverse higher in the last few months, and the continued increase in consumption, which is likely to shift at some point.

Read the latest Update at the Natural Gas Price 2021 Forecast

As mentioned above, natural gas posted a record high in 2005, but after the 2008 crisis, the situation changed forever. Before that, oil and gas were closely correlated, since both energy commodities are extracted. But, the global consciousness has been shifting towards energy-efficient products, which has sealed the fate for the eventual demise of fossil fuels, such as oil and gas. Of course, the demand for gas is seasonal, with spikes during fall/winter, which might give the wrong impression during those times, but the price has been making lower lows for many years, falling to $ 1.529 by June this year, as the coronavirus lock-downs dampened the demand further for everything, apart from safe havens, and not just for gas and oil. The demand of the recent months looks like a dead cat bounce, so we expect the top side to be limited in gas, with minimal gains, if any, in the coming months, while the larger bearish trend will resume sooner or later, and sellers will push the price to new lows in the coming years.

Natural Gas Price Prediction for the Next 5 Years

Apart from the sentiment, supply and demand are the factors that drive the prices of commodities hardest, most of the time, especially in the long run. While the supply and demand have been increasing continuously for natural gas, as the IEA data shows in the charts below, the predictions for the future are not so bright, as the world is shifting from fossil fuels to renewable energy. This is clearly shown in the gas charts below, where we can see that the price fell from record highs around $ 16.50 in the 2000s, to $ 1.55 earlier this year. Many major companies are already writing off their assets in gas fields, and the worst is yet to come.

The Market Demand for Gas is Seasonal – The market demand for natural gas is very seasonal, since gas is the primary fuel or energy source used for heating or electricity, most of which is also used for heating or cooling. At times when summers are too hot, the demand increases, but the normal season for natural gas is during winter. Although, as trading usually goes, speculators like to buy the asset before the actual rise in the demand, as do storage companies, so the climb in gas starts well before winter, sometimes in the preceding summer, with the decline starting in early/mid-winter. This makes it much easier for traders who like to trade the long term charts. They basically buy in early fall, and sell in mid to late winter, in a rinse and repeat strategy. While buyers have no real guarantee that gas will turn bullish in fall, it is almost certain that at some point, in late winter, gas will turn bearish and resume the long-term bearish trend. This year was different, since the gas price declined during winter time and has been bullish since May, which would be strange in normal times. But the coronavirus lockdowns changed everything, so we are not in normal times now, and volatility has picked up, compared to recent years. The demand is expected to fall by a total of 4% during 2020, and then start getting back to normal, but the climate agreements will make sure that the public will have to reduce their use of gas and move towards cleaner energy sources. So, the recent increase of the last several months looks like a great opportunity to go short on natural gas, and the technical analysis supports this, as we will explain below. The long-term demand has been declining for fossil fuels, since the world is headed towards cleaner, renewable energy sources, which makes the sale trade in gas more tempting. 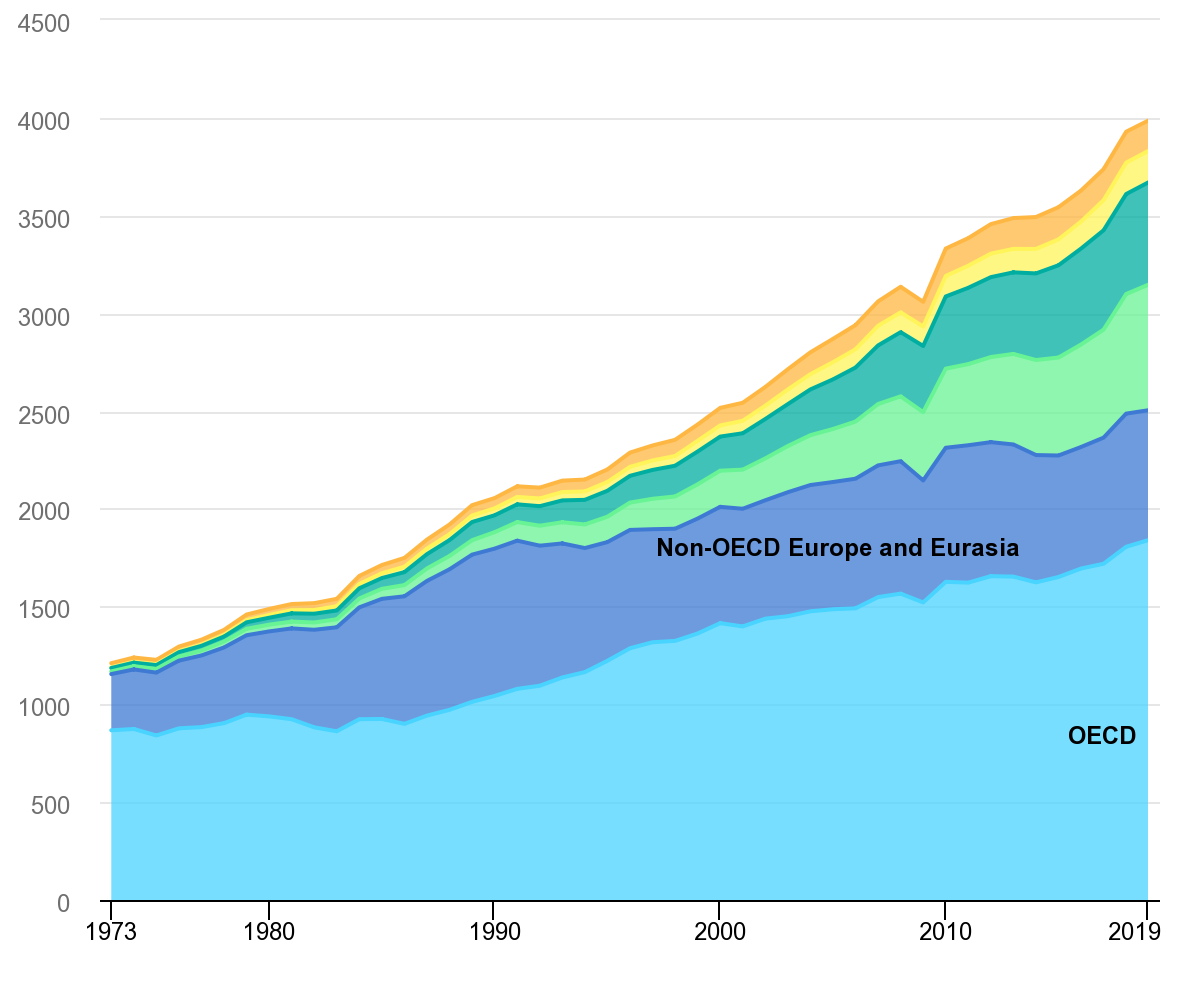 The demand for natural gas was on a constant increase 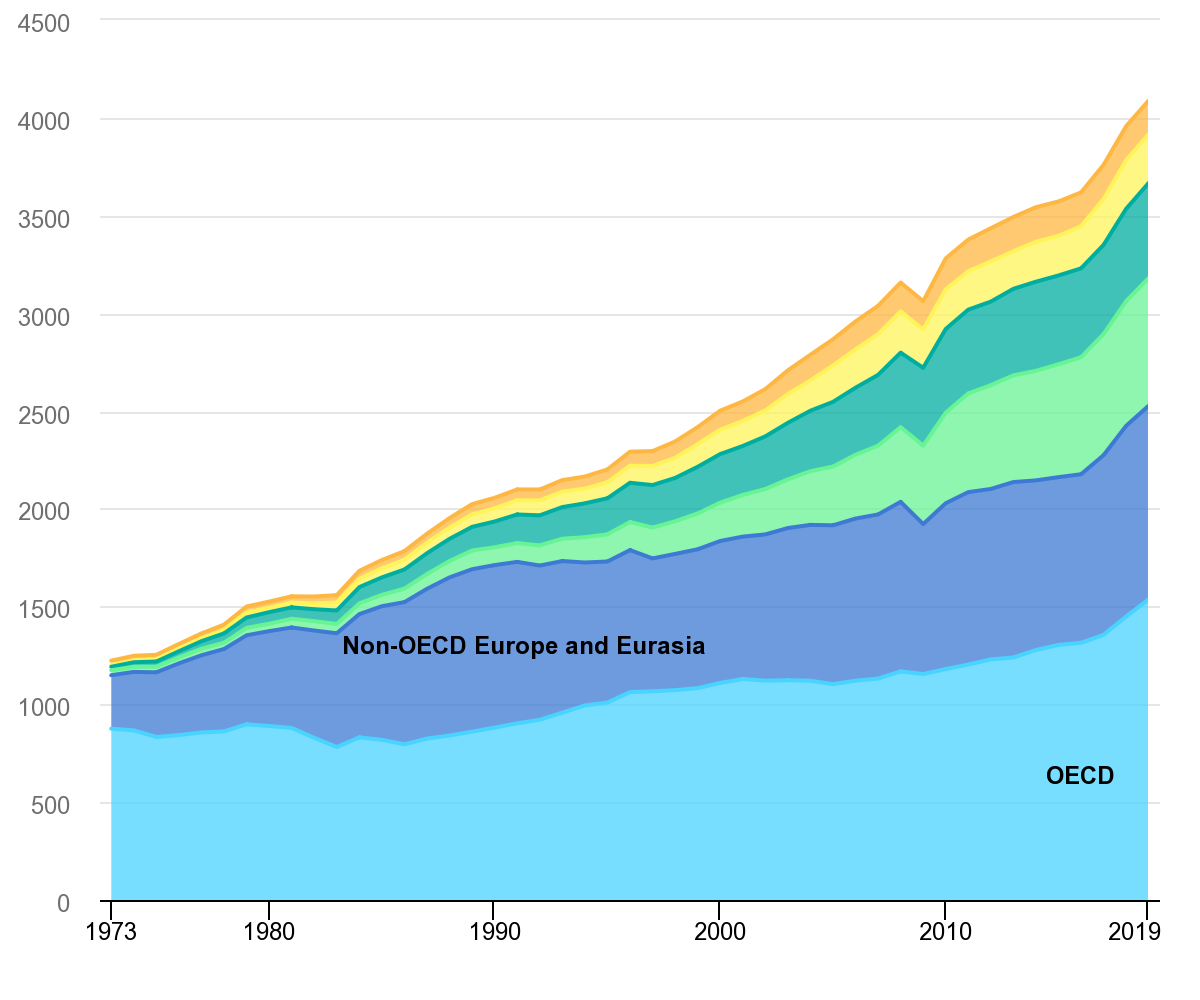 Correlation between Natural Gas and the USD

The correlation between the USD and natural gas is negative, as with most other commodities. At first glance, it is not too difficult to see that the negative correlation between the USD index and gas prices hasn’t been particularly strong in recent decades. During the 1990s, they were both bullish, but they are supposed to be negatively correlated, so this meant the negative correlation wasn’t there. During most of the 2000s, the USD turned bearish, while gas remained on a bullish trend, so the correlation increased somewhat, but while gas topped in 2005 after the big spike, the DXY bottomed in 2008, which again doesn’t show much of a correlation. Even the size of the moves in both assets weren’t comparable, with the USD index gaining around 20% in value, while gas lost nearly 80% of its value. The DXY was on the increase until 2016. Gas prices, on the other hand, kept declining, but the USD has been trading within a range since then. So the weak correlation was lost once again. It only picked up this year, as the USD increased during Q1, and then it reversed down again, while gas turned bearish in the first three months, but has been increasing since then. But as we said, we are not living in normal times and the markets are mostly trading the USD now, so commodities that are quoted in USD have to follow the opposite direction. However, I don’t think that this correlation will last too long. 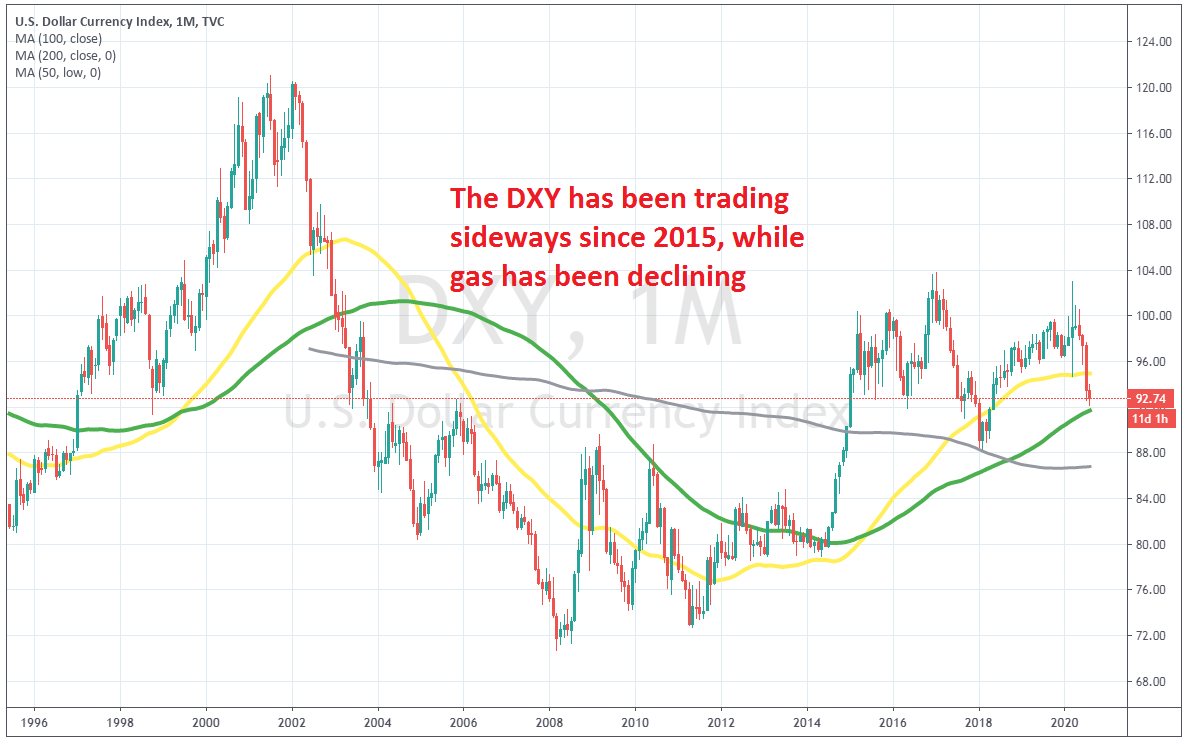 The DXY was trending higher during the ‘90s 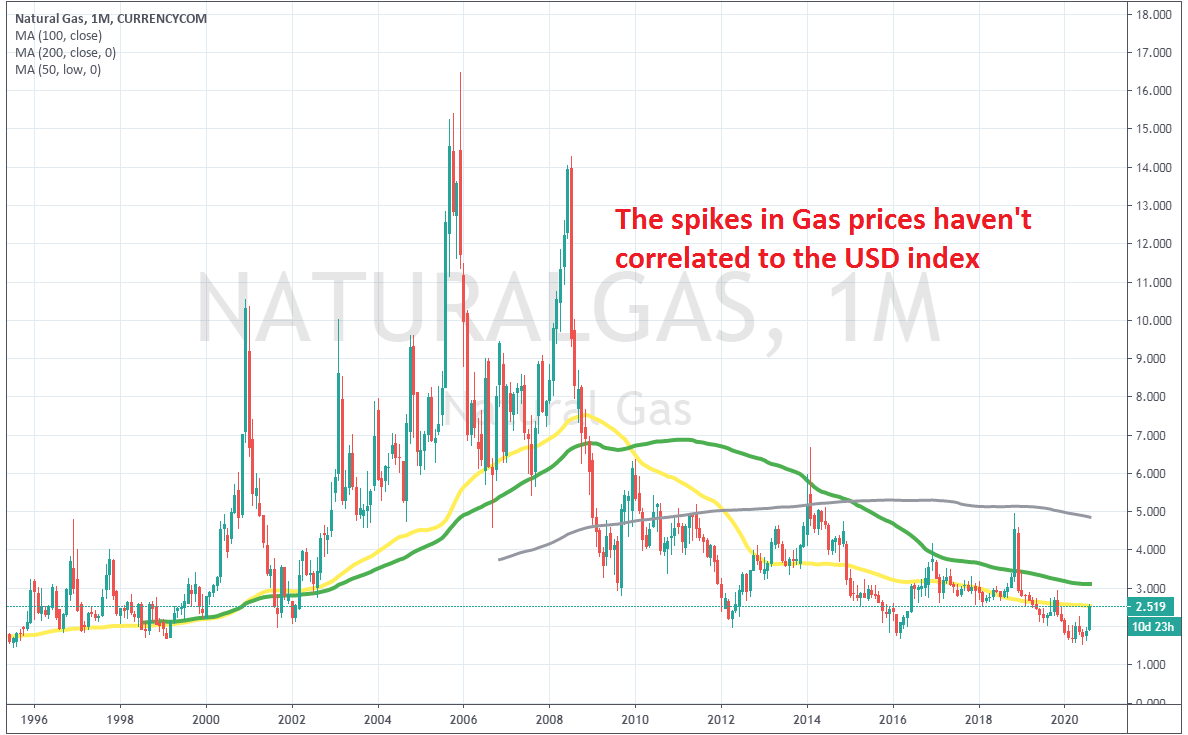 Gas prices were also increasing during the ‘90s

Natural gas traded on a bullish trend for decades, reaching a record high at $ 16.50s. Although the spike in 2008 was lower than the top figure in 2005, the shift in the bullish momentum in the fossil energy markets came in 2008, during the financial crisis. During the uptrend, moving averages provided some mild support on the monthly chart, which is the only one to take into consideration for technical analysis, since there is a lot of noise in the other charts, that is simply confusing for everyone. 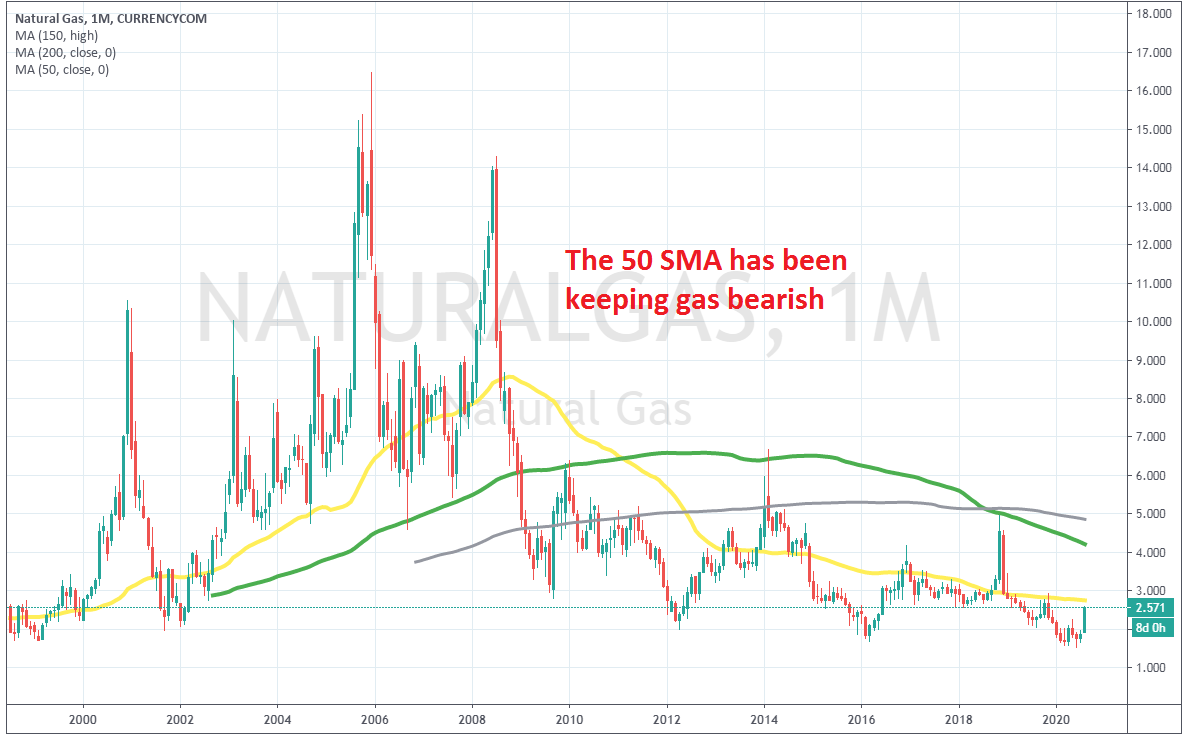 The trend shifted in 2008, and natural gas crashed lower, sending the price below all moving averages. These moving averages eventually turned into resistance during pullbacks higher, and they were really good indicators to sell the bounces in gas. When the spikes were larger, the 150 SMA (green) provided resistance; when the retraces higher were smaller, the smaller MAs, such as the 50 SMA (yellow), took over that job, and there was one occasion when the 200 SMA (gray) reversed the retrace in 2011. That moving average has been providing resistance since early 2017, and there was one occasion in 2018 when the price broke above that, but reversed at the 150 SMA. The price continues to remain below the 50 SMA, as the long-term bearish momentum continues, but in recent months, we have seen a bullish reversal, due to the increased weakness of the USD. Although, all odds point to an end of this bullish retrace, when the price catches up with the 50 monthly SMA again, and the long-term bearish trend is likely to resume from there. So, we are following gas prices, in order to open a long-term sell forex signal, as soon as that happens.