The GBP/AUD has been moving in a bearish trend since last March 2020. A year ago, its prices were at 2.086 level, and now it has reached 1.805 level. In 2020, when the coronavirus pandemic forced nations to impose lockdowns and the economic activities were halted throughout the globe, the currency pair GBP/AUD started to decline and continuously declined for three consecutive months. In July 2020, it saw a minor gain; however, the pair then again posted losses for the next two months. In October, when restrictions were lifted, the pair attempted to reverse its direction; however, the pair continued falling until the end of the year.

Recent Changes in the GBP/AUD Price

GBP/AUD Price Prediction for the Next 5 Years

Since the 2000s, the Australian dollar has gained strength from the great expansion in the Chinese economy, while the British Pound has been under pressure since 2016 due to Brexit progress. In last year, the pair GBP/AUD suffered due to the coronavirus pandemic crisis that destroyed the global economy and Britain, Australia, and the Chinese economy and affected the commodity prices due to halted economic activities in the world. During the pandemic crisis, the Chinese economy outperformed the rest of the world and achieved remarkable growth of nearly 2% at the end of 2020 while suffering a contraction of 10% in Q1 of 2020. In 2021, China’s economic conditions and situations are expected to increase further and grow, implying a positive sentiment surrounding its largest trading partner Australia, which will eventually support Aussie and put pressure on the currency pair’s prices GBP/AUD.

The United Kingdom was hit particularly hard by the pandemic in terms of health outcomes and the economic consequences. The new British variant of the coronavirus caused an increased number of deaths and new measures of restrictions around the country that hit the economy hard and weighed heavily on the British Pound, eventually dragging the currency pair prices in 2020. However, for 2021, as Brexit has reached an end and the coronavirus pandemic situation has come under control to some extent with a massive vaccination campaign around the country, the outlook for the UK economy has improved. This has benefited the British Pound driving the prices of GBP/AUD on the bullish trend throughout the first quarter of 2021.  However, for the coming months, the projections for the UK economy have been made somewhat depressing due to the after-effects of Brexit that will be clearly seen once the pandemic crisis is over, which is likely to cool down by the end of this year. So, the concerns of Brexit’s after-effects on the UK economy still hold a threat against the British Pound, and these fears will likely weigh on the GBP/AUD pair in coming years.

As for the Australian economy, the outlook for 2021 is very impressive as Australia has handled the global coronavirus pandemic better than most countries. The Australian vaccination campaign has already shown better results in preventing coronavirus spread and has paved the way for a quick economic recovery. This means Aussie has a bright future compared to the British Pound that is set to decline, which means that GBP/AUD pair is likely to weaken in the coming months.

Chinese Economy– The latest draft of China’s 14th Five-Year-Plan (FYP) was released in October 2020 that had the key aspects of technological self-reliance, dual circulation, and a move to a sustainable and resilient economy. The message was clear that China wants to reduce reliance on other countries and focus on innovation by targeting technical development.

China also noted that it would have to adopt a gradual shift in economic structure from export-oriented growth to domestic consumption growth. Coronavirus pandemic already contributed to more domestic-led growth by reducing foreign exposure and helped China achieve a little economic recovery in the face of weak external demand. However, China has been facing many hurdles while becoming a world power over the past few years as the US has placed restrictions on the export of high-tech products and direct investments to China. The UK and several EU countries have also blocked Huawei from having a role in developing the 5G network.

According to the IMF, China has already completed its recovery in many ways and is returning to its pre-pandemic growth levels ahead of all large economies. However, the IMF has revised its growth projection for the country in 2021 to 8.1% from the previous 8.2% due to technological decoupling risks with the US and domestic financial risks. Still, the projection for growth is not bad and is higher than the US and UK. The Chinese economy’s improved outlook means more demand for commodities and more supply from Australia, which will eventually support the China-proxy Aussie dollar and weigh on the currency pair GBP/AUD.

British Economy – The British economy has been suffering from the Brexit developments for the past several years. Finally, the Brexit process has been completed, and the United Kingdom has parted its ways from the European Union. However, before it could handle the partition, the country got hurt badly by the coronavirus pandemic crisis, which destroyed the economy through lockdowns and caused massive deaths due to infections in the country. A new British variant could be held responsible for a massive economic fallout compared to other European countries. However, in the past few months, the country has recovered a lot through tough restrictive measures and successful vaccination campaigns, driving the British Pound higher against many rival currencies.

The International Monetary Fund (IMF) has also downgraded its projection for UK economic growth in 2021 to 5.1% from the previous projection made in October at 5.9% amid the severe impact of the pandemic and post-Brexit effects. After more than nine months of difficult negotiations, the UK and EU agreed on a deal and parted ways at the end of 2020. The agreement still holds many issues unresolved, like the free trade zone between the two parties. The agreed Brexit deal only provides tariff-free bilateral trade in goods and does not include services which mean 80% of the UK’s GDP and 45% of its exports will be affected by this agreement. There are many more challenges that the UK will have to face as an independent nation, and these challenges have imposed a negative outlook for the country in the coming years. It means GBP/AUD will likely decline in the next five years or more.

Australian Economic – The Australian economic outlook is also improved compared to that of the UK. The domestic economic recovery has been sustained over recent months amid better health outcomes and further expansion in monetary and fiscal policy. The forecast for the GDP and employment growth has also been improved from previous levels. The IMF has predicted a 3.5% growth in 2021 in the Australian economy that is 0.5% higher than the previous projection. Australia has also been efficient in controlling the coronavirus compared to other countries as its fatality rate has been very low during the pandemic.

In Coronavirus-Resilience Ranking, Australia holds the second position after New-Zealand that has been achieved by a strong, healthy response and securing enough doses of AstraZeneca & Oxford vaccines to inject the whole population. The controlled situation around the country regarding the pandemic and lifted restrictions has improved the country’s outlook compared to the United Kingdom, currently under lockdown due to the third wave of coronavirus pandemic. It means a better performance of the Australian dollar in the coming months will weigh on the value of GBP/AUD. The Reserve Bank of Australia’s governor, Philip Lowe, is expected to keep the monetary policy stable until the Australian economy achieves the Inflation, GDP and Employment goals.

Risk-Off Market Sentiment – The emerging risk-off market sentiment could hurt the GBP/AUD rising prices in the short term. The rising tensions between China and the United States and the EU and UK could reverse the market sentiment. Both currencies involved in the GBP/AUD currency pair are associated with risk sentiment, and any sign of risk-off market could have a great impact on the pair. Recently, the United States and the coordination of the European Union, Canada, and the United Kingdom have imposed sanctions on Chinese officials for violating human rights in Xinjiang Province. The human rights abuse on Uighur Muslims has been an issue for several months, and Beijing has faced many restrictions against these developments. However, China has dismissed these allegations and called them fake, and has imposed even harder sanctions on European lawmakers and diplomats in reply to this action. This has raised tensions between western countries and China that could lead to another cold war, and hence, risk-off market sentiment has emerged in the market. Any further negative development could hurt the market’s risk sentiment and could affect the prices of GBP/AUD not only in the short-term but also in the long-term.

The GBP/AUD pair is exhibiting choppy trading since June 2020, trading in between a narrow trading range of 1.8504 – 1.7487 level. On the technical front, the GBP/AUD pair is holding below monthly 20 and 50 periods EMA resistance levels of 1.8187 and 1.8327 levels, respectively. The leading technical indicator, the MACD (Moving average convergence divergence) and RSI (Relative Strength Index), are exhibiting a bearish trend in the GBP/AUD currency pair. 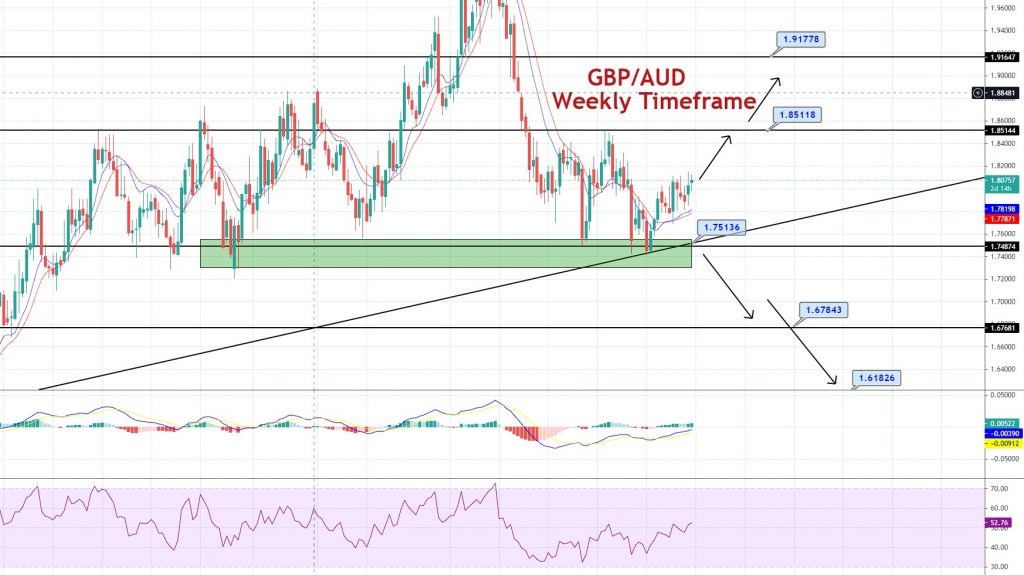 We can also see an upward trendline extending support to the GBP/AUD pair around 1.7487 level. However, this level’s violation can trigger sharp selling until the next support area of 1.6166 level. Conversely, the bullish breakout of the 1.8504 level can lead the GBP/AUD price towards the 2.0512 level. 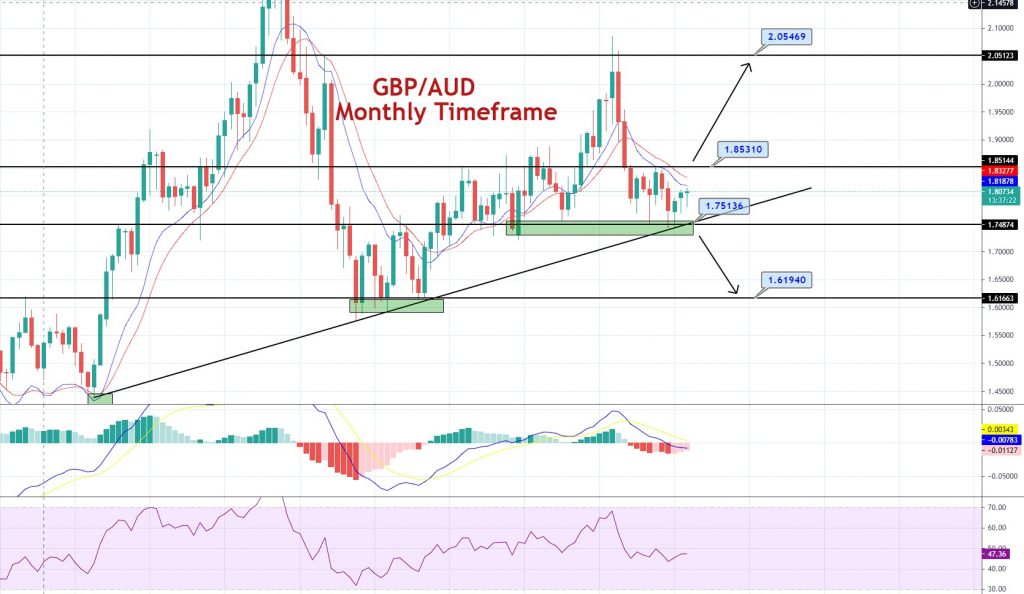 The GBP/AUD pair has entered the bullish zone at 1.8071 level on the weekly timeframe, and it has strong odds of a bullish bounce-off until the 1.8511 level now. The series of exponential moving averages are also suggesting chances of a buying trend in the GBP/AUD pair. These exponential moving averages are holding around 1.7819 level, suggesting buying opportunities in the GBP/AUD pair. The pair may find immediate support at the 1.7513 area, and the violation of this level can lead it towards the 1.6784 mark. The weekly RSI and MACD indicators support a buying trend; therefore, GBP/AUD may lead towards an initial target level of 1.8511 and 1.9177 level afterward. Good luck!