We closed the month of December in 2015 with some important events coming from some central banks, such as the FED rate hike and the ECB extra QE announcement. 2016 started in the same way with crucial events from Central Banks. The ECB president Draghi announced that in March the ECB will take additional monetary easing steps and the BOJ would set negative rates. The negative sentiment prevailed in the market this month and the stock markets suffered losses during the first half of the month, but in the second half, the sentiment improved somewhat. We had a great January, making 842 pips this month. 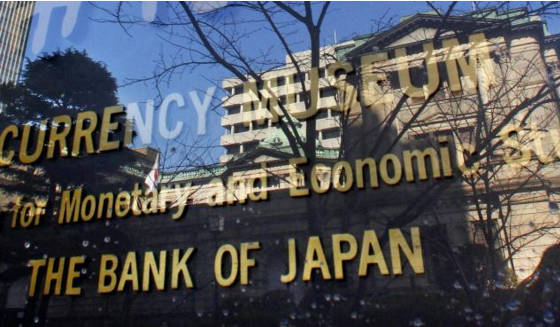 We had made 209 pips from our USD/JPY long-term buy fx signal when the BOJ delivered a surprise rate cut.

It hasn´t been easy trading this month as it is often the case in the new year, but the price action was heavily affected by fear and risk aversion this month and made it extra difficult. When the risk appetite improved everything reversed hundreds of pips without looking back, and it was very easy to get caught in the middle. So, in order to avoid getting whipsawed as the price moved several cents up and down, we increased the number of long-term forex signals and held back on the short-term forex signals this month. This worked well as all our long-term signals closed in profit, with the USD/JPY bringing the biggest profit. We made 209 pips of profit with that fx signal. We opened it in the first week of January and as the price was moving down one of our clients thought that it might eat our weekly profits, but I strongly felt that the 116 level would hold. 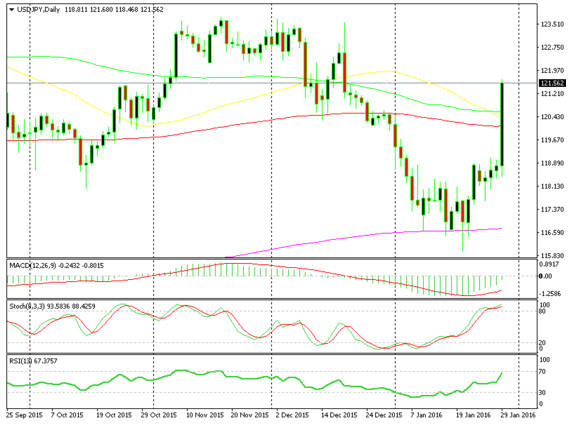 We issued 80 fx signals this week for a total profit of 842 pips. As we said above, the first week of January the forex market was rational regarding the price action and that´s the week with the highest number of fx signals. We reduced the number of forex signals as the volatility and uncertainty increased. On the first week, we had the best performance regarding win/loss ratio and made 268 pips. On the second week, we had some difficulties with the unexpected volatility but we still managed to make 89 pips. The market was still behaving strangely on the third week so we had some ups and downs but closed that week with 143 pips in profit, all of which was acquired on the last day. Our long-term fx signals brought us most of our profit in the fourth week, making 342 pips in total that week which brought our monthly total profit to 842 pips. On the last trading day of the month four fx signals closed, two of them being short-term EUR/USD sell fx signals, one being a GBP/USD long-term buy fx signal and another long-term USD/JPY buy forex signal which was opened in the first day of the mon;th. We had 20 losing forex signals out of 80 so the win/loss ratio for the month of January is 75:25 which is our long-term average, We had a 100% success rate for our long-term signals!

After closing 2015 with plenty of action and volatility in the forex market, 2016 started off quiet and normal. At least, that´s the impression we had in the first week. The price action in the first week was normal and the moves were logical. Whenever there was disappointing economic data from an economy, that country´s currency would decline and vice versa. That normality didn´t last long, though. By the end of the first week, the FED released their meeting minutes from December when they hiked the interest rates by 0.25%. The minutes were slightly hawkish since all FED members were on board for the hike and the outlook for 2016 remained the same for 3-5 hikes. But the market started to get a negative feeling; the Shanghai Composite index resumed the downtrend after being stable for a few weeks, declining from 3,600 at the beginning of this year to around 2,700 by the end of this month and this sparked a chain reaction which spilt onto other stock markets around the globe and the forex market.

As a result, the stock market suffered considerable losses but in the last two weeks they fought back and recuperated about half of the losses while the Chinese stock index closed the month near the lows. As a result of the risk aversion sentiment, the price of oil declined from around $39/barrel to $27/barrel by the middle of the third week and risk currencies such as the CAD, NZD, AUD and GBP suffered some heavy losses while the Euro, the Swiss Franc and the Yen benefited from that. USD/JPY declined from around 120.50 to below 116, but as the risk sentiment improved by the end of the month it crawled back up. The BOJ gave it the final push to above 121 when they decided to set negative interest rates for deposits on the last trading day of January. USD/CAD made a massive 900 pips up move during the first half of the month when the petrol price was going down but then declined about 700 pips during the second half of the month as the petrol price rose up to $33.50/barrel. There were rumours around about the OPEC countries having a meeting which sparked the reverse in the price of petrol but no one of the OPEC countries wanted to cut production as they declared, and still petrol closed at around the $34 price. Another event this month was the press conference of the ECB president Draghi. He said that the ECB will take additional steps for their QE program but after the immediate shock the Euro didn´t suffer much.

We have had plenty of important economic data this month, but I hate to say that all the data combined together doesn’t paint a very bright picture of the global economy. So, I don´t feel particularly confident for the coming months, unless things turn around. The increase of the QE size by the ECB and the BOJ will probably help to some degree. Basically, most of the world economies remain in the same shape as the last few months of 2015 which isn´t a good place to be. The Chinese manufacturing sector is still in contraction and the decline of the Shanghai Composite index clearly shows the difficulties that the Chinese economy is going through. The Japanese economy is not in a good shape either, hence the increased QE by the BOJ and the negative deposit rates. Even the earnings were stagnant for the year. The Eurozone economy hasn´t shown signs of improvement after the ECB started the QE program last March apart from Spain and Ireland and this month the services and manufacturing sectors missed the expectations as well as the investor confidence. The only two economies that showed some change this month were the US and UK economies, but the change was for the worse. The employment in both economies is solid and the unemployment is at around 5% but the other sectors such as the manufacturing sector and the wage increase have dramatically slowed in the US and fairly slowed in the UK. On top of that, there´s no inflation pressures to be seen anywhere in the world.

USD/JPY has been in a strong four-year uptrend and right now it is going through a consolidation period. This month it made an attempt to  retrace lower but this failed because the price closed about 100 pips above where it started at the beginning of January. The 20 MA in the monthly chart provided support at around 116. This level is also a strong support in itself since the price has reversed three times in the last two years after reaching it as the weekly chart shows. Another fact adding strength to this support level is the 200 smooth MA in the daily chart, which stands about 50 pips above 116. The BOJ played its part in the reversal but such support/resistance levels are good places to define risk, then one thing or another will come up and send the price your way, such as the BOJ negative rate decision in this case. 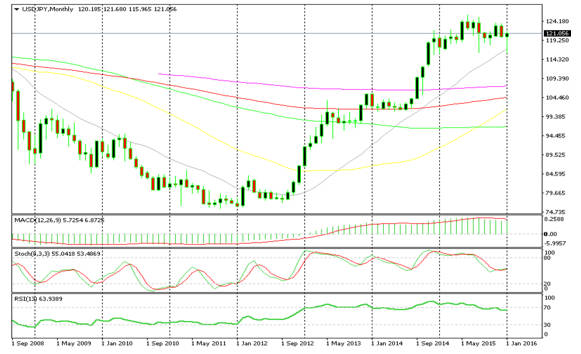 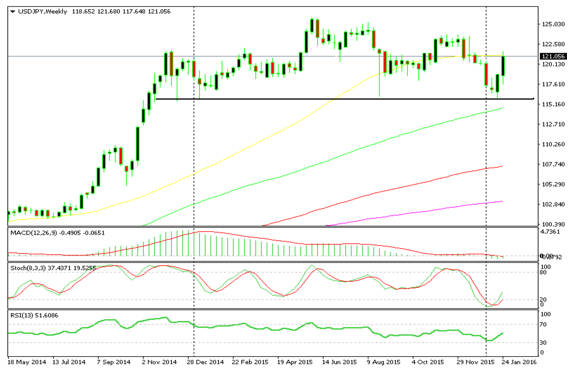 The British Pound has relentlessly declined since the second week of December against the USD and many other currencies because of the Brexit referendum coming up later this year. But in the last 7-8 trading days we have seen a retrace take place. It is normal for this to happen after such ferocious decline, after all nothing goes up or down in a straight line. But as you can see after the price touched the 20 MA in the daily chart and the stochastic indicator got close to overbought levels the price moved sharply lower in the last day of January, so it is possible that the retrace has ended and the downtrend has resumed again. Either way, we saw this as an opportunity to open a sell forex signal on Thursday evening when the price was just below the 20 MA and it hit take profit the next morning. We can say that the downtrend has resumed because the lows from January are broken. 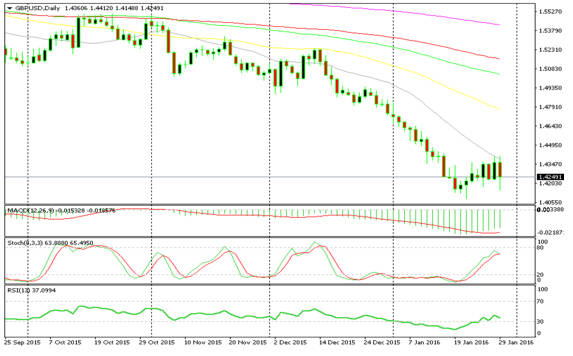 The 20 MA provided resistance during the reverse.

After closing last year with a 4,000 pips profit, we had a great start to the new year. We made a hefty 842 pips profit this month which puts us on the right path to reaching and possibly exceeding last year´s profit. It hasn´t been easy, though, as the risk sentiment has shifted back and forth leading to some unpredictable moves, but the first and last weeks were the ones when we made the most pips.We´ll try to put the same performance next month as well so you can profit from our forex signals too.

AUD/USD Challenging MAs as it Moves Higher, Following the Soft US ADP Jobs Report
13 hours ago