We closed the third week of May on Friday with some reasonable gains, and I hope you are happy with the progress we´ve made this month thus far. This week has experienced large shifts in sentiment at the Federal Reserve (FED) offices. The April FMOC meeting minutes were published on Wednesday and we saw that many FED members were a lot more hawkish than what the statement signalled in April. But, personally, I can´t say that I´m surprised with the mood swings the FED has displayed as of late. Anyway, the buzz went our way since we had two open USD buy forex signals and, in fact, it has been another good week for us. We made 151 pips this week, which brings the monthly total to 536 pips so far with a week and a half left to go. 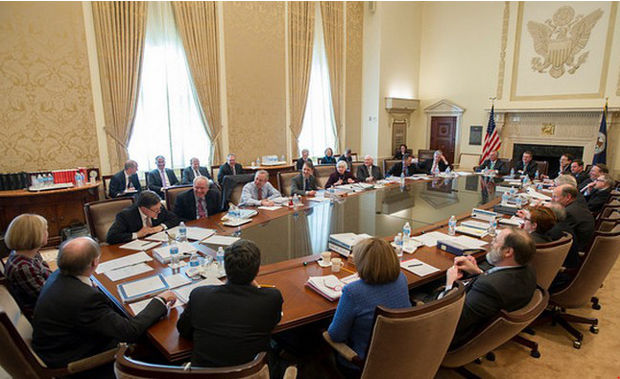 After last week´s great performance of 422 pips, we entered the market this week with a positive attitude, and it really paid off. We couldn´t match last week´s profit but 151 pips is still something to write home about. The number of forex signals wasn´t very high but that was due to a calmer market in the last two trading days. In fact, in the first three trading days, we opened 11 short-term forex signals – eight of which hit take profit. However, on Thursday, the volatility decreased big time so we only managed to open two forex signals… and then Friday was dead quiet. It felt like watching paint dry. The range in most forex pairs was 20-30 pips. We opened two forex signals on Friday but only one hit take profit, and the other forex signal remains open. So, in total, we opened 16 forex signals, all of them short-term, 13 of which hit take profit while the other three hit stop loss. That gives us an 81:19 win/loss ratio. The market was quite predictable this week and that helped us a lot. There were two unfortunate events which reduced our profit by 80 pips: the 1% decline in the producer inflation in New Zealand, and a 250 unexpected surge by the GBP. We had a buy forex signal in NZD/USD and a sell forex signal in GBP/USD during these events so we got caught up in the mayhem, but all in all, we can´t complain from the market behaviour this week and the profit proves it. The price went in the direction it was supposed to go, respecting the levels as it went.

The Market This Week

The forex market continued from the last couple of weeks; the price action followed the common logic, which makes it easy for us forex traders and analysts. The US economic data showed improvement, so the USD reasonably moved higher step-by-step. But the main driver this week was the FED. The April FOMC monthly minutes were released on Wednesday evening. The April statement was neutral-to-dovish and the market was expecting the minutes stick to this sentiment. But, the minutes showed that most of the FED board members were hawkish on the US and global economy and they made comments suggesting a higher rate, and so the June rate hike was placed back on the table.

The exact phrase was “Most participants judged that if incoming data were consistent with economic growth picking up in the second quarter, labor market conditions would continue to strengthen, and inflation making progress toward the Committee's 2% objective, then it likely would be appropriate for the committee to increase the target range for the federal funds rate in June.” The June rate hike odds jumped to 24% from just 4% at the beginning of the week. The USD index shot approx. 100 pips higher and some important levels were broken in certain pairs. USD/JPY finally broke above 110 and USD/CAD broke above 1.30. This was a sudden move by the FED but, recently, we have gotten used to these mood changes. In September last year, the FD delivered a bearish statement diminishing the hopes of a December rate hike, but in October, they decisively put it back on the table. This year, in March, they suddenly turned dovish and the April statement followed in their steps. And then, we see pretty hawkish comments a month later! There was a caveat; the FED wanted to see more positive data, but the US data from the April meeting has shown considerable improvement – and this indicates we´re going in the right direction. Anyway, the US dollar downtrend of the last few months seems to have come to an end and these minutes had a major impact on this outcome. Even the banks have changed their view and are calling a USD bottom for now.

As we said in last week´s weekly analysis, the inflation numbers were due to be released this week. After their publication, we saw some good and some bad numbers. The Eurozone numbers were the worst by far; core inflation ticked 0.1% down while the headline number, which includes energy prices, came out at -0.2% which means deflation. The UK inflation also trickled down to two points and the core inflation by three points, but at 1.2%… it is still in a good position. But, more importantly, the US inflation jumped to 0.4% last month from 0.1%. US inflation has been sliding down in the last several months, coming close to contraction, and that suggests the economy was in trouble. On top of that, the main mandate of the FED is inflation, so weak inflation meant that the future rate hikes would be delayed forever. But here we are – a 0.3% jump from the previous month gives the FED a reason to hike in June. They did say that they wanted to see more encouraging economic data and this data is what they’ve been looking for.

USD/JPY and USD/CAD broke above some important levels this week so I think it fair to have a look at these pairs. As the daily chart clearly shows, USD/JPY has been in a downtrend in the last three months. But it looks like the downtrend has come to an end, at least for the short term. After touching 105.50 early this month, the trend has reversed and it´s only been moving up since. It broke above the 20 MA, in grey, which has turned into support now and then it closed the week just above the 50 MA in yellow. But that´s not a clear break… the 50 MA could easily turn into resistance as it has done so before. In the monthly chart, the stochastic and RSI indicators are both oversold and now heading up, so that gives the bulls another reason to believe that the reverse scenario will hold true. But the respective central banks will be the deciding factor. 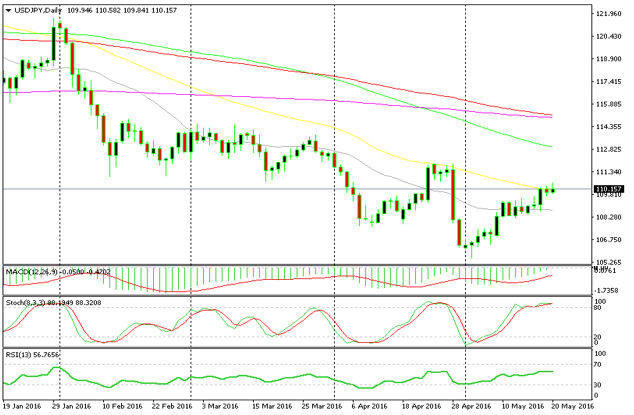 The 50 MA in yellow is a tough nut to crack 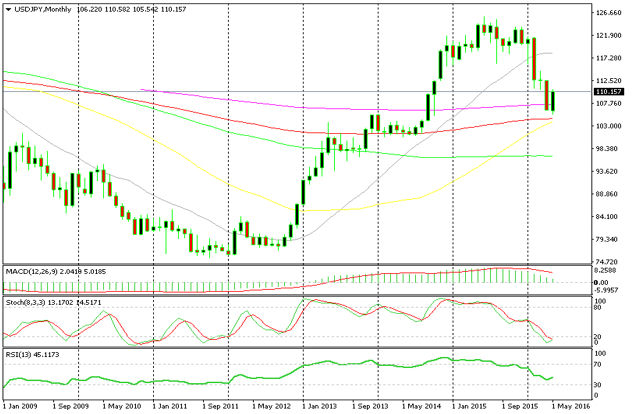 Stochastic and RSI are oversold and increasing

Similarly to USD/JPY, USD/CAD has been in a steep 23 cent downtrend since mid-January. But this month, the price has moved up from 1.2450s to 1.3160s – a 700 pip move! This looks more like a reverse than a retrace, because the retraces before have been shallower, no more than 200-300 pip moves. The 200 MA, in pink in the daily chart, has been broken and has turned into support as we can see. But, the 100 smooth MA in red is providing resistance now and all the three indicators in the window are overbought, which means we might see a retrace to the downside before the next leg up. In the monthly chart, it looks like the 200 MA has held. The stochastic indicator is oversold and this month it looks like a bullish engulfing candle but there´s still more than one week to go before the month ends. 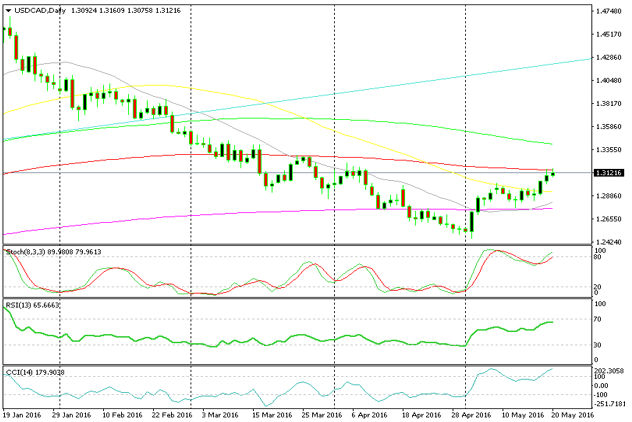 The 100 smooth MA, in red, is providing resistance 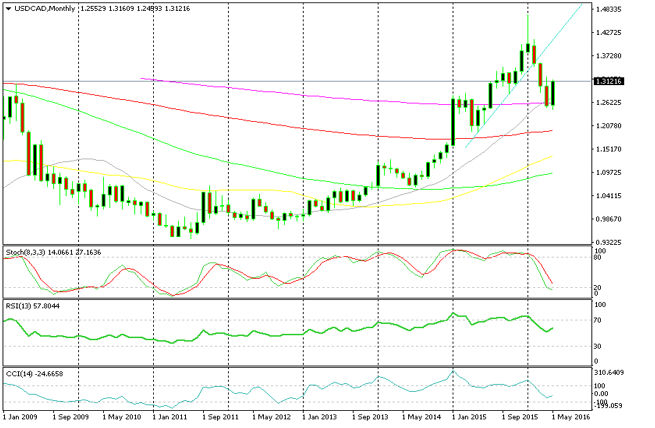 The bullish engulfing candle means that the retrace down is over

The third week of May is over and the monthly profit from our forex signals is greater. We made 151 pips this week from 16 short-term forex signals. The FED made it easier for us when the April meeting minutes came out to be pretty hawkish, unlike the statement. They made comments about a June rate hike if the data continued to be positive, and since April, the US economic data has been positive. We saw a jump in the US inflation numbers this week, and in the next we´ll get a chance to see the Q1 preliminary GDP numbers and the durable goods orders. If they are positive then the June rate hike will inch closer.