We wrapped up the second week of August on Friday, so we can say we are right in the middle of the holiday season in the northern hemisphere. So, are you feeling the summer heat yet? The forex market is surely feeling the heat. Liquidity is thin, although not as dire as last August when the average market range in most major forex pairs was 30-40 pips – if you leave aside the mini-crash of the Chinese stock market – which sent shivers across the financial markets.

Still, thin liquidity and the holiday moods led to some strange price action and market reaction this week. Last week, the forex market closed with a very positive sentiment towards the USD after a great US employment report. But this week everything seemed to go against the Buck with no reason. The economic data from the US on Friday provided us at last with a reason to sell the Buck, but that was way too late.

Besides all this, we saw some strange reactions in the forex market this week. The yield (interest) trade is unfolding amid global uncertainties, while the Yen keeps getting bid despite the BOJ (Bank of Japan) and the Japanese government in full action and the UK slipping into recession. Also, did you guys see the Kiwi surge in Wednesday afternoon despite the rate cut from the RBNZ (Royal Bank of New Zealand)? The RBNZ failed miserably and I´ve heard this will be a forex handbook example, with the title “Interest Rate Cutting for Dummies”. Please read further below if you want to get an inside feeling of the forex market this week. 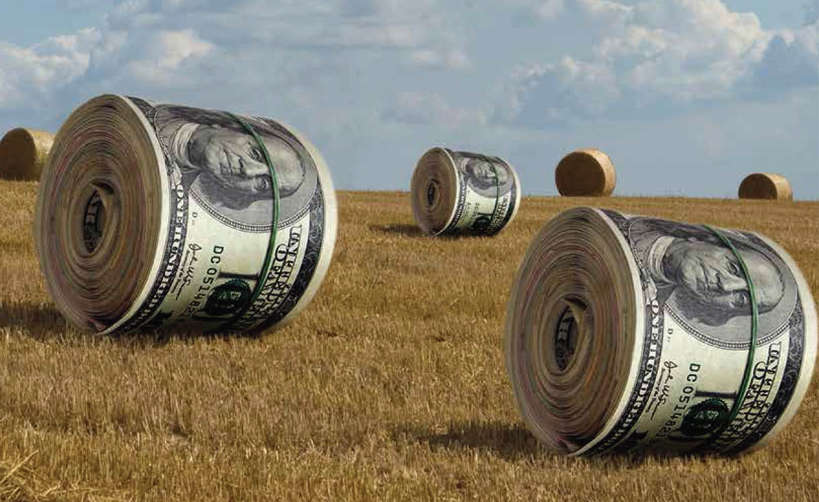 Money is rolling into high-yield pockets of the globe

Do you guys use your own analysis for trading besides following our forex signals? We suggest that you do and if so, then you must have witnessed how strange the forex market was this week. The price action didn´t follow common sense and logical analysis that, usually forex signals are based on; the US employment report last Friday was great and sent the Buck surging, but from Monday this week the market turned against the poor USD without any reason.

Another prime example was the surge in the NZD. The RBNZ cut the interest rates and they hinted for more rate cuts to come, yet, after a quick 30 pip drop the Kiwi surged about 230 pips. The rate cut was widely expected but such a jump in unexplainable. I think it´s the new environment that is forcing the forex market forces to act in unusual ways.

Anyway, we had a tough time this week as nothing seemed to follow the logic. We suffered an 89 pip loss, half of which is countered by the 48 pip profit we made last week. We apologize for that, but I´m quite sure we will make enough pips in the next two weeks to finish the month with some nice profit, as we almost always do. We opened 12 forex signals this week, five of which hit stop loss and the other seven were closed in profit, giving us a 58:42 win/loss ratio. We missed a chance to open a long-term sell forex signal in GBP/USD after the US economic data missed the expectations on Friday, which would have brought us more than 100 pips by the end of the day. But, we were waiting for the price to get to 1.32 in order to have a better risk/reward ratio.

Alright, let´s start with what happened to the Buck this week since it felt the heat all week. After the great US employment numbers last Friday, every forex trader would bet his house on the Buck. But, the forex market, just like all other financial markets, often shows an attitude of ignoring logic and common sense. So, the USD got beaten up all week without a reason. The only move that made sense this week was the 100 pip decline in the USD on Friday when the US economic data missed the expectations.

The price action in the high yield currencies has been another puzzle to solve in the last two weeks. The RBA (Royal Bank of Australia) cut the interest rates last week and the AUD dropped about 60 pips. But it quickly recovered and surged more than 250 this week.

Question: What´s the reason for this?

Answer: The recovery of the global economy is not going as planned/expected. IMF issued a warning note on China, Japan, and the EU economies are really struggling, not all sectors of the US economy are falling in line… and Brexit. All these disappointing factors scare the investors away from risky assets and push them toward government bonds, especially those with higher yield (interest rate). The interest rates in Australia are obviously higher than in other developed economies, so the cash flows into the AUD.

Following the RBA rate cut last week, the RBNZ cut the interest rates as well this week. During normal times, any related currency would fall 200-300 pips, but not nowadays. Many things have been twisted and as we said, the market is not reacting normally at the moment. The rate cut was anticipated, but that doesn´t mean that NZD should move 230 pips up.  Well, it did and more than high-yield hunting, this move is more of a market disappointment from the RBNZ. The forex market thinks the RBNZ is too small and too weak to change the stream of the NZD, unlike the ECB and Draghi… who can send the Euro 35 cents down in a few months only by uttering a single word.

Last but not least, Brexit. Some of the most important sectors of the UK economy have contracted in July and some of them have contracted in June too. That doesn´t mean recession yet. But, it is near? Reuters published a poll where they show that the UK economy will fall into recession in Q3 and Q4. Can Theresa May change this in autumn with the promised loose fiscal policy?

This week wasn´t really about the economic data, it was more about the market sentiment. Sure, we did get another confirmation that the UK economy is going down when the June manufacturing production declined for the second month and that was before the Brexit vote. Besides that, the Reuters poll which is not an economic data release but it is economic news showed that the British economy will fall into recession in the second half of 2016. That´s one of the reasons the GBP has been feeling soggy as of late.

Despite the IMF (International Monetary Fund) releasing their warning to the Chinese authorities for further reforms, the Chinese trade balance numbers released on Monday showed an improvement. The inflation numbers beat the expectations as well. But, the fixed asset investment, the retail sales, and the industrial production numbers which were released on Friday missed expectations.

Friday was a bad day for the US as well. The monthly inflation on the producer end and the retail sales all came out negative. These two reports are quite volatile, fluctuating up and down month on month, unlike the great employment sector numbers last Friday which has shown the first strong positive trend for years. Yet, the USD declined after the release on Friday and at least it justified the USD weakness all week.

After closing last week with such a positive sentiment, no one knows for sure why all the negative sentiment towards the Buck this week, besides on Friday off course when the US economic data missed badly. Anyway, we as forex traders don´t have to figure out why the market is moving in a certain direction, particularly when there isn´t a clear logic behind it. All we have to do is figure out which direction the forex market is more likely to follow.

Looking at the USD/JPY forex chart below and judging from the price action we can unanimously say that the downside is the preferred direction for this forex pair right now. Why? Because the move up after the great US employment data last week was only about 50 pips during the hour of the release and the entire move was about 80 pips. This Friday, the retail sales and the producer inflation missed the expectations but it wasn´t that bad – and these two pieces of data are not as important as the employment sector. 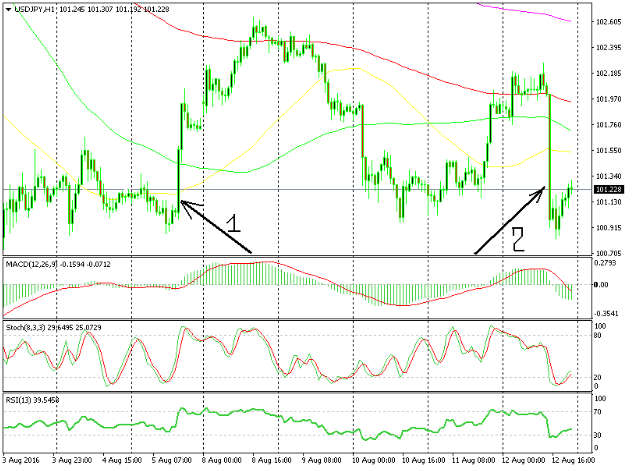 Clearly, the second move is bigger than the first one

Yet, this forex pair declined about 120 pips in less than an hour. This shows that the forex market bias is on the downside. With this sort of price action, we can say that it will be very tough to hold above if we get close to the 100 level again. If the buyers accept defeat at that level, then the 0.95 level won´t look so distant.

As you can see on the H4 forex chart below, NZD/USD has been in an uptrend in the last three weeks, but last Friday it retraced 230 pips down after the impressive US employment report. The 100 smooth and simple moving averages provided support in early Monday trading which brought an end to this retrace. The uptrend resumed again and the price has moved above the 50 moving average in yellow, which has now turned into support.

The big bullish candle by mid-week was the surge that followed the RBNZ rate cut. On the monthly chart, we see the long-term downtrend which started in 2014 and the retrace up that has taken place for almost a year now.  The retrace seems exhausted now as the stochastic indicator is overbought and the price is right below the 200 moving average which has provided support before and will likely turn into resistance. But, the yield  hunting has to come to an end in order for the downtrend to resume its course again. 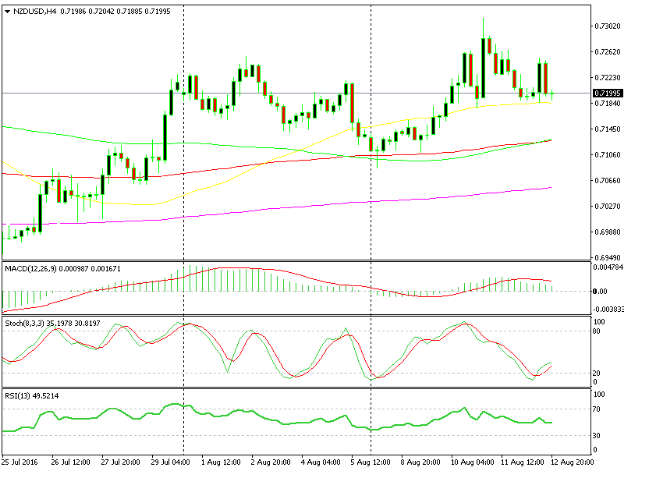 The 100 moving averages have provided support at the beginning of the week. 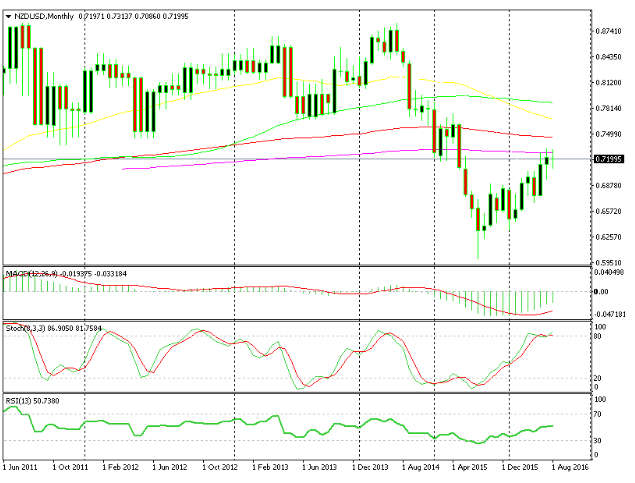 Last Friday, the US employment report was great and the USD buyers jumped in, so it was a surprise to see the USD on the back foot the entire week. That lasted until this Friday when the US producer inflation and the retail sales posted some horrible numbers. The appreciation of the NZD was a big surprise this week after the NZD cut the interest rates. That´s how market sentiment works – the appreciation of the high yield currencies in the last few weeks has been an example of how the carry trade works and how the money moves around the globe in times of uncertainty. We´ll be here with you again next week to watch the forex market moves and try and figure out the following trends.

Why There Is A Gold Rush for CMA Licenses in Kenya
4 days ago
Selling EUR/GBP Below the 20 SMA, Ahead of the BOE Meeting
EUR/GBP has been quite bearish recently, as the BOE has already has hiked interest rates many time and we decided to sell this pair again
5 days ago