This definitely has been a very interesting year. First was the Brexit vote and now Donald Trump becomes the 45th President of the United States. I'm not really sure how much the world will change from these two events, but some sort of change will come. After all, people have voted for a change.

Whatever happens, we cannot change the politics. Sure, we have our political opinions since humans are political beings, but as forex traders, we look at politics for hints and clues about the future of the forex market.

So, the will of the American people is that Trump becomes president. That was an odd scenario until last night, but now that the people gave their verdict, we have one less unknown to worry about in all this big equation that is forex trading.

Judging by the comments during the campaign, Trump´s election carries with it uncertainties about the future of global affairs and, of course, most importantly for us, the future of global trade. But also judging from past experience regarding the US Senate and the Congress and the US politics in general, I think that the US political scene is built in such a way that won´t allow strong deviations from the current path, which is the path the US has followed since it became the world´s leading power.

That has calmed the markets and the forex market, in particular, is feeling a lot more comfortable than last night about Trump being the President of the US. As you can see from the EUR/USD chart, this forex pair has completed a round trip and it´s now more than 200 pips lower from last night´s high. 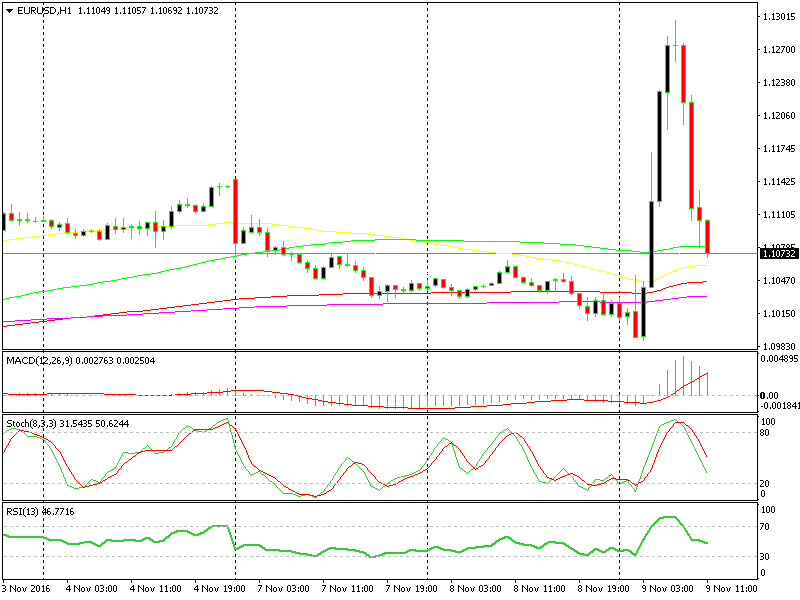 Suddenly, the USD buyers decided to like Trump as president.

Now, this is a very positive sign for the USD bulls. When Trump took Florida and a couple of other swing states last night, the USD started to nosedive, which gave me the impression that the Buck would lose 20 cents today, just like the GBP pairs did after the Brexit vote.

But the reverse this morning makes the prospect for the USD buyers a lot brighter. Looking at all this again now, I think I know the reasons why this is happening and why the USD might benefit from Trump, but that´s quite an analysis which we will shortly post in one of our next updates today. So stay tuned folks because it´s all getting even more interesting.