Trump’s Cabinet Is Shaping Up, The Buck Is Loving It - Forex News by FX Leaders

Trump’s Cabinet Is Shaping Up, The Buck Is Loving It

One of Trump´s main disadvantages during his campaign was that he was an outsider without much political experience and particularly without many political connections. This was seen as one of the weakest points for him because no one knew what his cabinet would be.

Would he pick competent people for such important positions such as the Secretary of State, Attorney General, the head of the State Department, Defence Secretary, and others? These positions are not important only for the US; they are important for the whole globe because it includes political affairs, the world economy, global safety, etc.

This was also Clinton´s strongest point since she´s been in politics and around the White House all her life. So, whenever Trump advanced during the campaign, these sorts of questions loomed in everyone´s head. This is one of the reasons the USD suffered during these periods.

But the US is such an immense nation with plenty of experience in all fields, so finding the right people for the job should not be too hard. Trump´s cabinet is not yet all set, but it´s taking shape and that´s positive for the Buck.

Ex-New York Mayor Rudi Giuliani is expected to be the Attorney General and he´s a very respected figure in the US political scene. Besides him and a few other promiscuous names, Mnuchin is very close to being appointed to the post of Treasury Secretary.

He is a veteran at Goldman Sachs, so there´s lots of experience for one person. The USD pairs jumped about 40 pips after the announcement about an hour ago. There are still many places to be filled in Trump´s cabinet, but it seems that the more it progresses, the stronger the USD gets. 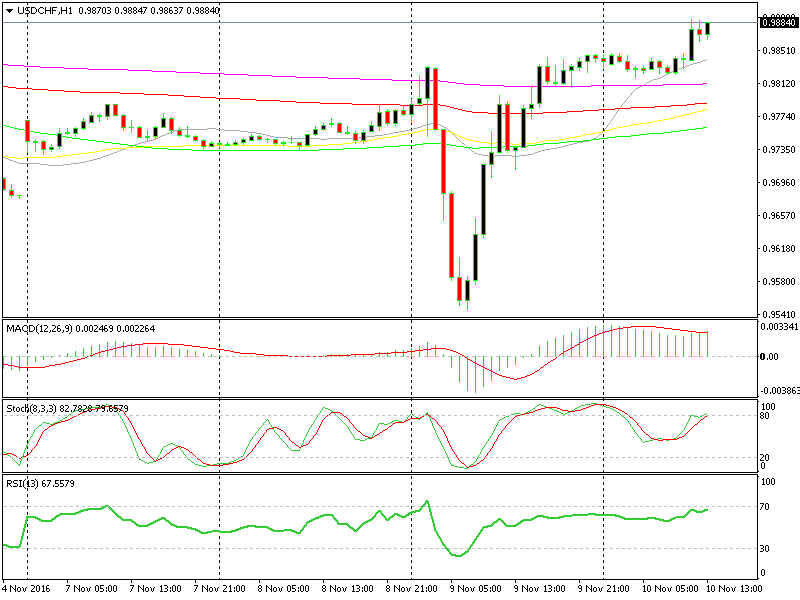 USD/CHF jumped to 0.9880s after the announcement

That makes sense because the US political picture becomes clearer and the uncertainties wear off, at least in the short term. We´ll have to wait and see what actions Trump will take regarding the big global and domestic issues that he himself has raised. However, that will take years and the forex market is more interested in what will happen in the near term. For now, everything is going to plan so the USD keeps marching on. ?

Skerdian Meta // Lead Analyst
Skerdian Meta Lead Analyst. Skerdian is a professional Forex trader and a market analyst. He has been actively engaged in market analysis for the past 11 years. Before becoming our head analyst, Skerdian served as a trader and market analyst in Saxo Bank's local branch, Aksioner. Skerdian specialized in experimenting with developing models and hands-on trading. Skerdian has a masters degree in finance and investment.
Related Articles
Weekly Outlook, Jan 25 - 29, 2021: Top Economic Events to Watch This Week
The broad-based U.S. dollar is going to end this week on the bearish track as traders continue to cheer the Joe Biden administration's inaug
1 day ago