A Trade Idea – Is EUR/USD Headed Deeper Down? - Forex News by FX Leaders

A Trade Idea – Is EUR/USD Headed Deeper Down?

This morning we posted a market update on why the Dollar is buyers are feeling so confident now that Trump won. The main reason was Trump´s fiscal plan, which will add strength to the US economic recovery and make the FED more comfortable in hiking interest rates.

Now the gap in interest rates between the US and the EU will likely get even wider.  So, the yield hunters will turn to the US now which means more demand for the Buck.FED, interest rates,

We forgot another very important positive factor for the USD though, the Republicans. The Republican Party won everything there was at stake in the elections this time. They won the Senate, the Congress and of course the White House. This means that the president will have very few problems implementing his programme, unlike Obama during his second mandate whose programme was hindered from every angle, to the point that part of the administration was completely shut down.

All these fundamental reasons point down for EUR/USD but there´s more, there are technical reasons as well to sell this forex pair. I saw a note from the Citi (the bank) yesterday which had a very interesting EUR/USD chart in it. Actually, until 2000 (the year) the European currency was Ecu and it was only used electronically by the banks. 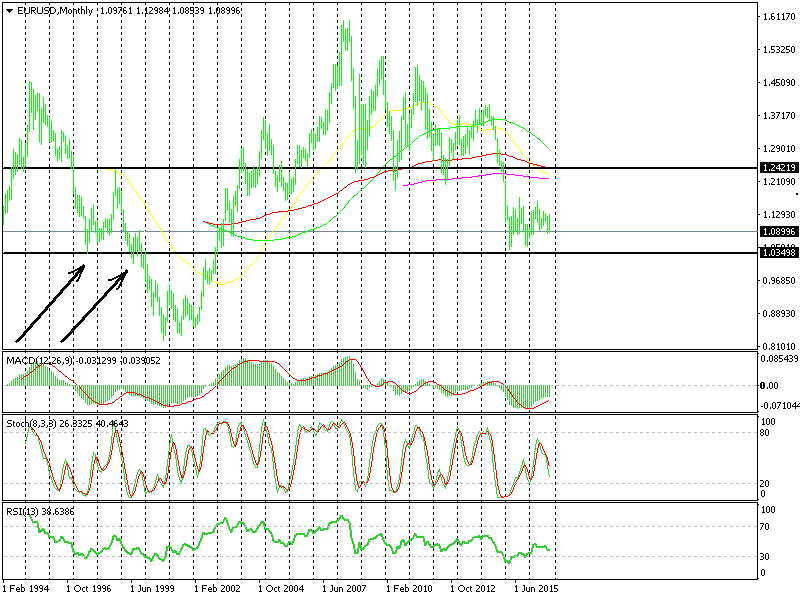 Will wee see the same scenario unfold now as in the "90s?

Anyway, if you look at the EUR/USD chart above you can see that late in the 90s the price was roughly around these levels and it was threatening to breake lower. It tested the downside in “97 where the first arrow is pointing and after making a 20 cent retrace higher it returned back down, breaking the support level this time and falling an additional 20 cents.

As you can see on the right part of this forex chart, a similar pattern is forming now, so if the low from early 2015 gets broken then be prepared to see further losses in this pair. I don´t exactly remember the fundamental situation back then, but now it clearly leans on the USD side.

This is a trade opportunity/idea which I don´t know if I will take since the time span is way too wide for my likings. The only thing which could ruin this scenario is if the Eurozone economy lights up all of a sudden and the ECB decides to start hiking the interest rates and end the QE programme. But, I don´t think that´s going to happen anytime soon and some guy from the ECB confirmed that just yesterday, I think it was Constancio.

Bitcoin Breaks Above 16,500 - Brace for Buying Positions
5 hours ago