Looks like the British Prime Minister Theresa May is backing off from a hard Brexit scenario. I don´t know how on earth or where she got the idea that Britain should take the rough path out of the EU, but it was shocking seeing Britain taking the wrong turn.

Yes, people of Britain voted to leave the EU, but they never voted for a hard Brexit. Britain might want to take back control from the European Court of Justice, which I don´t think will change anything in the UK legislation or have an impact on people, but they don´t want to leave the single market and alienate themselves.

This simple reasoning took some time to happen in the head of the UK PM, but it looks like she´s finally getting in line with the people. She used to be so stiff until a couple of months ago, but she has been growing sensitive recently. I guess the Brits will share the cake now.

The UK High Court decision and the softer tone have been the reason that the Pound came back from the dead. The market sentiment has changed (although not completely) and GBP pairs have been recuperating some of the losses.

This is not the end of it though. May published her EU/UK negotiation plan yesterday and she said she´s taking Brexit to parliament first, which means that a hard Brexit is out of the picture. I expect GBP to go through a period of consolidation and perhaps gain some more ground, but the best way to play this is to sell EUR/GBP. 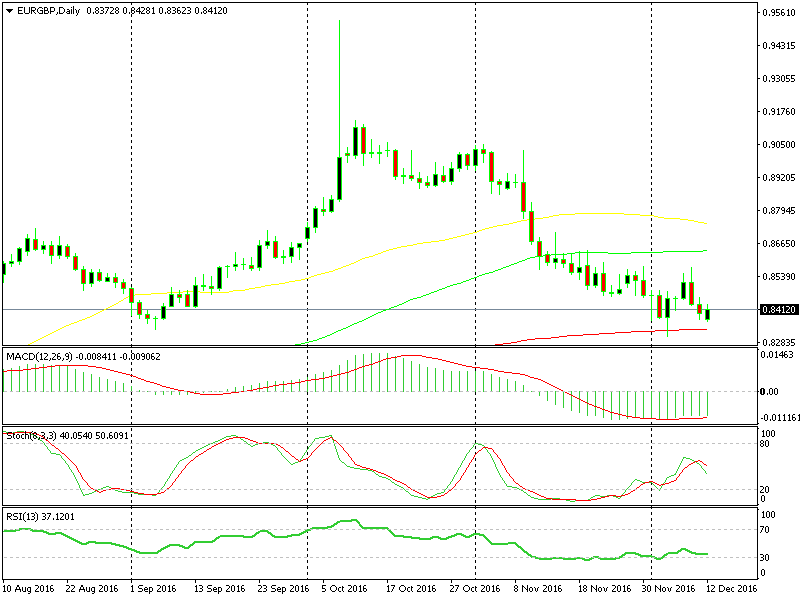 Sell now or wait for a retrace?

The FED will hike the interest rates on Wednesday and Trump is coming to power in less than a month, so there is the risk that the USD outperforms the GBP because of this. That´s why selling EUR/GBP is the best way to play this, particularly since the ECB (European Central Bank)  went all bearish again.

Looking at the daily EUR/GBP chart, we can say that technically this is not the best time to sell this forex pair, since it is oversold right now. So, I might wait for a retrace higher, probably to around 0.8650 or 0.8750 where we can find the 50 SMA and the 100 SMA, which will likely provide some resistance while the other technical indicators become overbought.