The past is now history, and a new era of political and economic confrontation has been ushered in. Guess who made all this possible? That´s right, the new US president Donald Trump.

Trump was sworn in as the 45th US president on the third Friday of the week and, with less than two weeks on the job, he has managed to turn around the way everything has been working for years (even decades).

He´s becoming increasingly hostile towards the EU (a continuing trend…), canceled the TPP (Trans Pacific Partnership) deal and is doing the same with NAFTA (North American Free Trade Agreement). He issued an executive order annihilating Obamacare (ACA), which makes things very misconstrued, made a few symbolic decisions for the fossil fuel industry… and a lot more, but I´ve lost track! Can anyone remember everything he does or tweets?

Anyway, these orders and decisions have made the political, social, and economic environment very uncertain. All this work has increased the volatility and the uncertainty in the financial markets immensely, as well as weighing on the Buck during this first month of the year.

Well, get used to this new era, because this is what the next four years will be like. It´s only been two weeks and the markets already need another Christmas break.

Elsewhere, the UK Supreme Court decided regarding Brexit this month. They left the UK high court ruling unchanged (as expected) and the GBP bulls got excited, which in my opinion is not altogether the correct move.

The first and last weeks of January have been really tough for us, not that the other three weeks were easy. We still managed to end the month with a 180 pip profit, despite the enormous uncertainty and fear in the forex market. 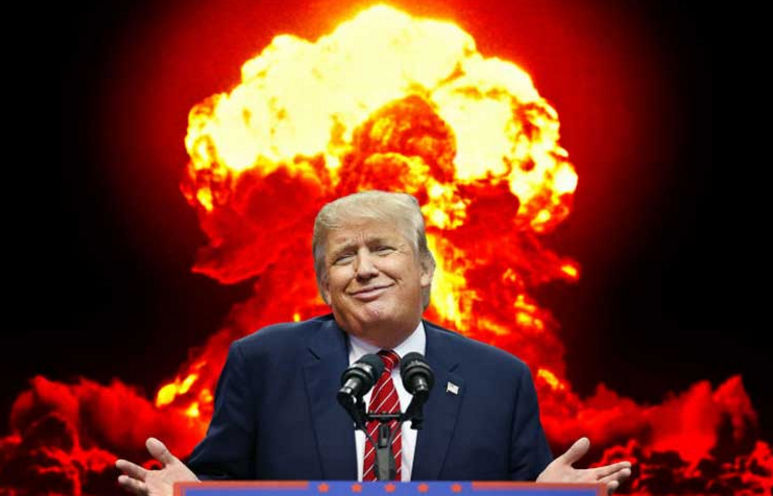 Whatever happens is not my fault

In December last year, we made more than 400 pips most of which came from the first two weeks of the month. Then, when the Christmas holidays came, liquidity dried up and the forex market became unpredictable but we still managed to hang on to our profits.

The same market conditions spilled into the first month of January, and we had a tough time during that week as well. But the following three weeks were really great for us.

We made 209, 162 and 166 pips, respectively, during those three weeks. In the second and the third week, most of our profit came from long-term USD/JPY signals. This forex pair has undergone an 18 cents rally during November and December last year, amid hopes that Trump will bring some kind of miracle with him.

But, this month´s events made the market re-evaluate those assumptions and rethink the strategy for most major forex pairs. That opened up the door for some long-term trade opportunities for us, particularly in USD/JPY as this pair saw the strongest uptrend at the end of 2016.

So, we opened up two long-term forex signals here and grabbed 156 pips from them in the second and third week.

The last week was horrible, too. The markets became even more irrational and scared of what else might come from Trump in the future and we know there´s a lot more to come. So, we have to give back some our profits to the market, particularly with our long-term sell EUR/USD signal.

That darn signal took about 200 pips from us, but if you remember, I had issued a comment for this forex signal a few weeks ago when it was around 100 pips in profit. If you followed those instructions then your profit must be around 300 pips bigger.

If you remember, the financial markets were sort of scared of Donald Trump when he was running for president of the US. Every time he closed the gap with Clinton in the polls, the USD would lose a pound of flesh.

But suddenly, everything turned around as soon as it became obvious that Trump was going to be the man. Everyone assumed that he would leave behind the strong election rhetoric and turn into a normal president. Besides, the US system would somehow control him, right?

It´s true that every economy needs a little push now and then, especially after a decade of crisis. But it all will depend on which direction you´re pushing. Your intentions don´t really matter if you´re not extremely cautious in this globalized world, let alone exhibiting reckless behavior.

So, that´s what the market is worried about right now. With only two weeks on the job, all that optimism has now worn off day-by-day and decision after decision.

The market is more worried now that Trump might screw it all up and host another crisis. That would be devastating for the global economy and most importantly – for the people. No one can go through two major financial crises in such a short time. These sort of toxic environments might turn into reality all sorts of scenarios, war, famine. So, the world is worried for good reasons and that´s all being portrayed through the forex market.

All we saw in the market during January was fear and uncertainty. This led to some messy moves and heightened volatility in most USD pairs. The Buck lost about five cents across the board, so the uptrend of the previous two months is really in danger if it isn’t history already.

Brexit didn´t help matters either, with the UK Supreme Court sending this referendum decision to the British parliament first, thus making some people thinking that it might reverse the process.

Well, that is not going to happen and this is only going to make things worse for the UK since it will mean more uncertainty for the future.

Following several months of positive global economic data, this month we saw further improvement in economic conditions in almost all the developed regions of the world. The Eurozone manufacturing and service sectors went through another month of expansion and, actually, the economic expansion picked up the pace during this time.

But the most notable thing in the Eurozone this month was inflation. The EU core CPI (consumer price index) rose by 0.7%, taking the yearly inflation number to 1.6% and the EU core CPI to 1.1%.

That´s huge compared to the same time a year ago when everyone thought that Europe was going to fall into deflation soon. Even the ECB (European Central Bank) was forced to acknowledge it and we know how much they hate to do so, particularly with the Germans nudging the ECB to end the QE program.

The US and Chinese economies also advanced further, but the UK economy was the best performer in January. Almost all economic data released this month exceeded expectations, despite the Brexit uncertainties.

The bar was already set quite high for most of the sectors of the UK economy, but manufacturing, industrial production, services, and construction numbers surprised us since the first week of January. Most analysts (including me) expect the British economy to make a swan dive soon, yet it keeps surprising us for good.

EUR/USD finally broke the December support level of 1.0350 in the first week of January, and many forex analysts thought that the downtrend which started after Donald Trump won the US elections had entered its next phase.

But, this quickly reversed and closed above 1.04 and (most importantly) above 1.05 which makes me wonder whether this ever was a genuine break.

These sorts of false breaks occur quite often and are called fakeouts. Sellers break a strong support level, then close their sell trades and reverse them, which takes the price back up again. This attracts more buyers and the snowball starts rolling.

That´s what happened here. The price moved above the support level and the panic button was pressed. Then, Trump came and EUR/USD ended up where it did. 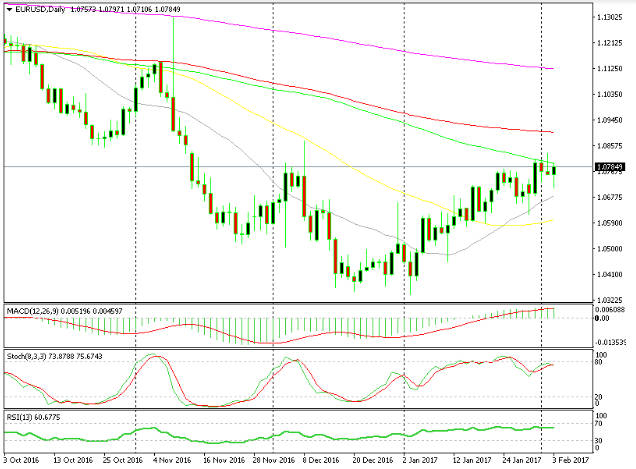 As we´ve said before, great moves bring great opportunities. Such an opportunity appears on the daily chart we provided. All technical indicators are overbought and the 100 SMA in green is clearly providing resistance.

Besides, the price closed below the 1.08 level. This has been a massive support level for ages, as you can see on the weekly EUR/USD chart. Speaking of the weekly forex chart, another indicator is providing resistance here, the 20 SMA in grey. But, the technical indicators are not overbought yet.

Well, it´s more about politics nowadays than anything else, so take the technical levels with a pinch of salt. But, it´s still useful to keep them in mind, as they will come in handy sooner or later. 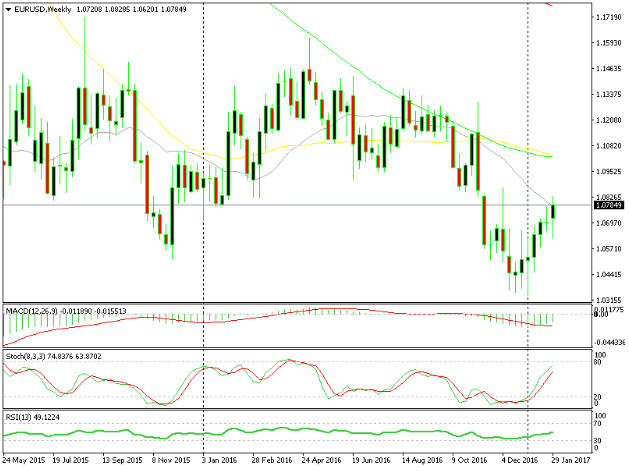 The 20 SMA is the one providing resistance here

So, there goes the first month of the new world. Lots of stuff going on and no one knows how next month or even next week will be. Uncertainty is astonishing, particularly because we don´t know which way the Buck will swing in the long term. We ought to adapt to the new trading environment and review our forex strategies because it´s getting tougher out there.

We had a drawdown at the end of the month but still closed January with some good profit. Will be back on Monday so, have a nice weekend until then!