Aussie Plunges After RBA – Buy The Rumor, Sell The Fact?

Yesterday, the Buck was in broad demand (apart from USD/JPY). However, yesterday evening some of the major currencies succeeded in advancing against the Buck. The Aussie and Kiwi in particular managed to advance during this time. If you remember, we had a sell forex signal in NZD/USD.

This morning though, the RBA (Royal Bank of Australia) meeting was scheduled at 5:30 GMT along with the cash rate (interest rate) decision. So apparently the pullback in AUD/USD and NZD/USD we saw last evening was due to this.

Our NZD/USD has hit take profit, so we've had a good start today on both the forex and commodities fronts. There were also some worries that the statement about high house prices and elevated debt in Australia might have played a role in this decline. 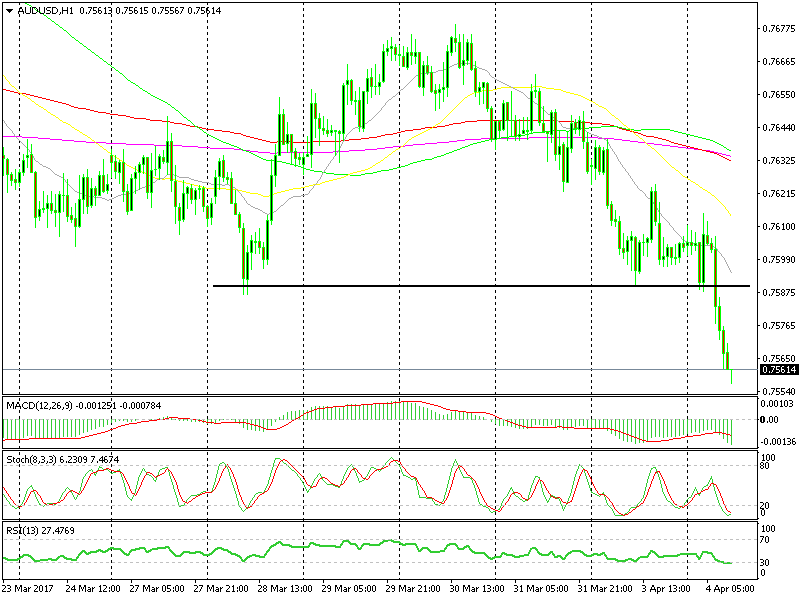 Anyway, the Aussie remains tilted downwards, so the plan today is to sell this forex pair on retraces. The downtrend of the last few days has been quite strong and we know that during strong downtrends the smaller moving averages come into play, so the 20 SMA on the hourly forex chart is what I´m paying attention to.

That comes at 0.7590 at the moment, which has been a support level and now it´s supposed to turn into resistance. By that time, this chart would become overbought, so that´s the level I´m looking at for a sell forex signal.

Ethereum Price Rejected Again: Is Another Bearish Move Coming Up?
5 hours ago