The Quid Dives Again After Construction Data – Has GBP/USD Reached Its Peak?

GBP/USD has lost about 70-80 pips this morning. The UK construction report, which was released a while, ago gave this forex pair the final push downwards.

The UK construction PMI reported at 52.2 compared to 52.5 previously, while the housing index fell to 51.7 from 52.2 prior. This is not a very big fall, but the problem with the economic data from the UK is that it´s getting close to the 50 level. If the data dips below the 50 level, the UK economy is officially in contraction.

The housing index is at its lowest since August of last year when Brexit panic was at its highest. It looks like we´re heading towards even darker times and of course, let's keep in mind that the real Brexit hasn´t started yet.

The technical outlook doesn´t look very promising for the pound either. Last week GBP/USD reached as high as 1.2615, but this forex pair reversed pretty quickly.

I was hoping that we´d reach the 100 SMA (red) on the daily forex chart. That moving average stands at 1.28 which in itself is a massive support and resistance level. 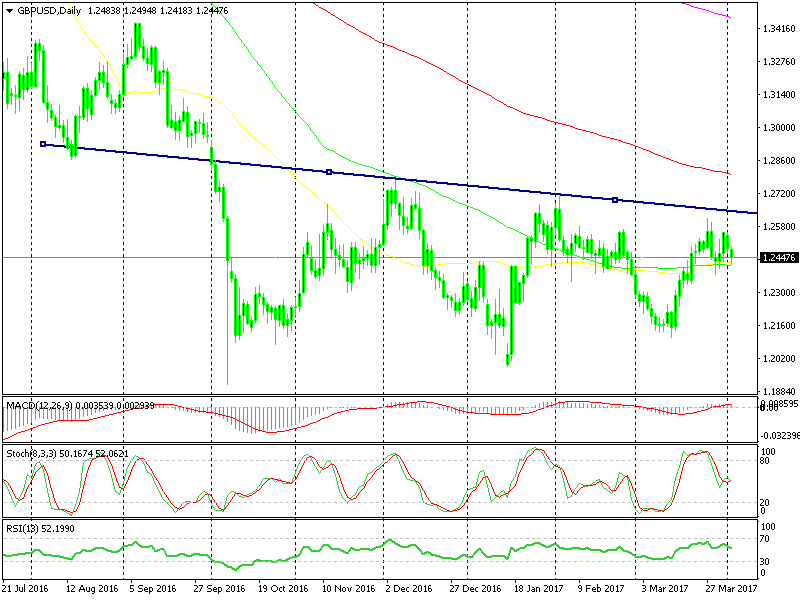 GBP/USD can´t push higher, but it´s not moving lower either

Regardless, the other two moving averages (green & yellow) held up well, so there was a decent chance that the buyers would suceed in pushing up once again to 1.28, or at least to 1.27.

In the last two days though, we´ve reversed back down again, so the question is have we reached the top? I was hoping to pick the top in this pair so I could open a long term sell forex signal.

Right now, the price action is unclear; the buyers seem to have weakened but on the other hand, the sellers don´t seem to be able to push too far below. I somehow still see another push higher happening since we´re still above the two moving averages. I´ll keep watching this pair closely because I don´t want to miss the opportunity to sell it big time.