Last night we opened a sell forex signal in EUR/USD. We did that at around midnight London time, so I don´t think everyone had the chance to follow the signal. Those who didn´t, had a second chance to open a forex trade in the pair this morning. 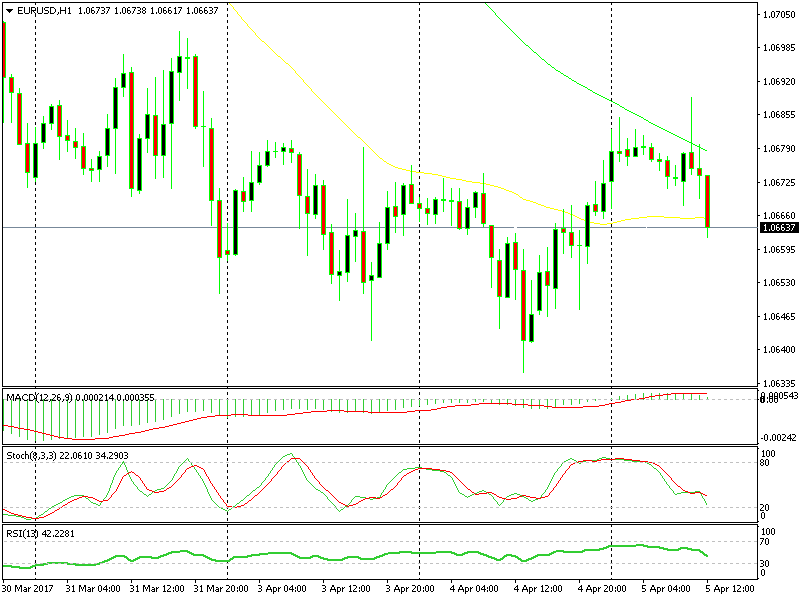 The 50 SMA (yellow) is surely a tough nut to crack

After a quick dip to the 20 SMA on the same timeframe chart this morning, the buggers (buyers) had another attempt just a couple of hours ago to break the 100 SMA. They managed to push the price above it for a moment, but the reverse didn´t take long and down we went again.

A couple of hours ago, the USD bulls had a wake-up call and the Buck has made some reasonable gains against other major currencies. EUR/USD lost about 25 pips after failing to break the 100 SMA.

We got pretty close to hitting TP for our forex signal, but not quite.  The 50 SMA (yellow) is behaving like the 100 SMA did this morning, but in the opposite direction. The price dipped below it by several pips but has retraced back up above it.

That´s not very good for our signal because the stochastic indicator is almost oversold, which might scare the sellers. But, I´m watching the price action and if it does anything funny we might as well close it manually for whatever profit we have left. Although, there´s a really good chance we hit TP soon.

Bears Dominate GBP/USD - Why Cable Could Trade Bearish Under $1.1970
11 hours ago