We had another great day as the market traded, for the most part, as per our forecast. Not only the Forex Trading Signals hit take profit but the analysis reports were also widely successful. In particular, the yellow metal Gold and the Japanese stock market index Nikkei did an excellent job.

The greenback grew by 0.28% to $99.69 as investors gained profit in the overbought currencies such as the Euro and Sterling. However, the U.S Treasury Secretary Steven Mnuchin remarked that tax reforms are unlikely to be complete until August which is adding another round of uncertainty in regards to Trump's policies.

Yesterday, the GBP/USD and EUR/USD traded in muted tones as investor's focus shifted towards the WTI crude oil and the Canadian dollar after the release of EIA inventories figures. We will discuss Gold and the crude oil in a lot more detail in our upcoming report, but for now let's take a look at the major fundamentals that may impact the market today.

The single currency Euro traded slightly bearish against the U.S dollar. In the 19th of April Morning Brief, I wrote: "$1.0690 is a very strong buying level". The EUR/USD took a bullish ride exactly from the level of 1.0689.

However, the economic events from the Eurozone were not that good.  The Core inflation was almost in line with the flash reading with a drop, from 0.9% last month to 0.7%. Though it's not a major drop, it impacts the central bank's policy decisions.

Today, we need to monitor the German PPI and consumer confidence figures from the Eurozone. Though these generally do not have a very big impact, these are likely to push the Euro in the absence of any major news from the Eurozone. 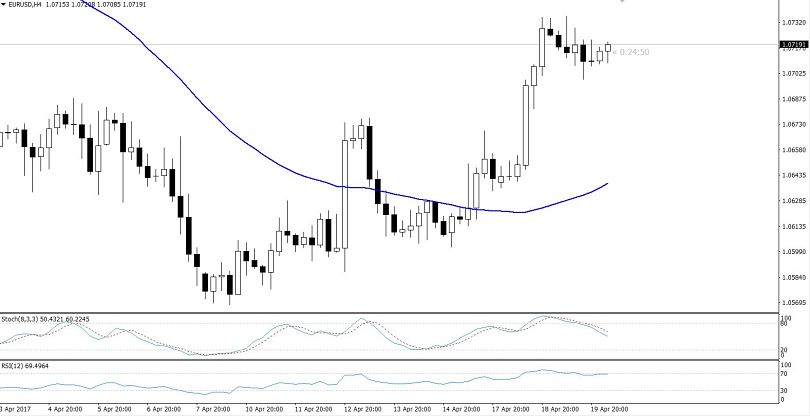 Undoubtedly, the EUR/USD is strongly bullish and has also completed a 38.2% Fibonacci retracement at $1.0698. That's why I recomended a buying entry here. At the moment, the pair has already made its move towards the upside, but is unlikely to go beyond the upper range of $1.0730 without any fundamental reason.

The leading indicator RSI isn't in the overbought territory anymore, whereas, the price is still holding above 50 periods EMA. Additionally, we can't ignore the "Three White Soldiers" candlestick pattern in the hourly timeframe which give us another bullish signal.

GBPUSD – The Pair In Action

The Sterling is trading modestly higher against the U.S dollar at $1.2800. Yesterday, I recommended keeping a sell position below $1.2800 with a take profit of $1.2760 for a quick profit.  Unfortunetly, the Sterling missed our target by only 8 pips. The major currency pair is still in focus after Theresa May called for general elections.

Lastly, the BOE Gov Carney is about to participate in a panel discussion at the Bank of France event, in Washington D.C. Although, he isn't expected to talk about upcoming monetary policy, the slightest comment could lead to huge volatility in the already volatile currency pair. 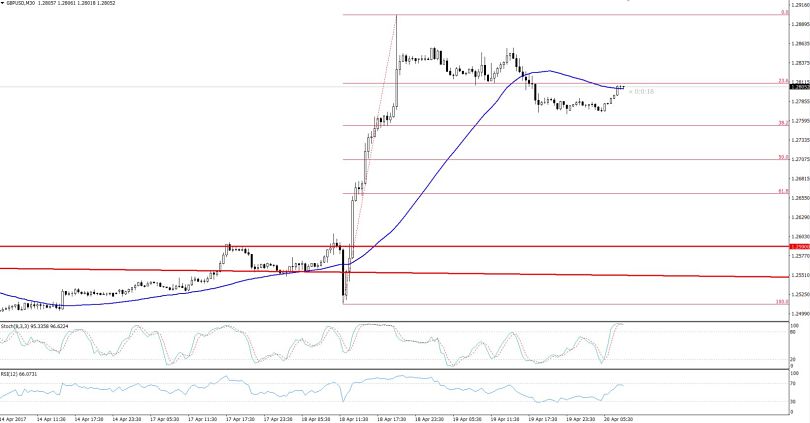 Quite interestingly, the EUR/USD and GBP/USD look like twins. Both are exhibiting a similar behavior such as, the "Three While Soldiers" in the hourly chart, which signals that a bullish momentum is imminent.

On the other hand, the 50 periods EMA and the RSI, are both indicating a bullish bias in the pair. But there is something to be wary of – the GBP/USD hasn't completed a $38.2 retracement yet. This means the pair can take a bearish turn anytime to test $1.2745.

Today all we need is to do is monitor the Philly Fed Manufacturing Index as well as the Unemployment Claims figures which are due to be released by the United States. Both are important enough to shake the market in the New York trading sessions.

EUR/USD Down the Slippery Slope Despite ECB Reminding Us High Inflation
8 hours ago
EUR/USD Facing the 200 SMA As Sentiment Remains Negative
We have turned bearish in EUR/USD as the bullish pressure fading and the price heading for 1.07 now
1 day ago