Yesterday, the trades in the dollar index were mixed despite the optimistic fundamentals from the United States. This is because most of the investors felt uncertain due to the news that Donald Trump unexpectedly fired the FBI Director, James Comey.

However, later in the New York session, the U.S dollar got some support upon the release of the labor market figures from the U.S., which remained in favor of the greenback. In particular, unemployment claims fell slightly to 236K which was better than the forecasts and the previous figure of 238K & 245K respectively.

Besides this, the dollar got additional support when the Sterling slipped after the Bank of England Monetary Policy Committee (MPC) left interest rates unchanged at 0.25%. Anyways, today is likely to be a dollar-dominated day as most of the high impact economic events are coming from the United States.

Gold – XAUUSD- The Metal In Demand

Yesterday, the precious metal Gold edged higher during the Asian trading session as the greenback was unable to extend its gains which resulted in an increased demand for haven assets.

In addition, the Boston Fed President Rosengren sounded relatively hawkish as he stated that three further rate increases were likely for 2017, though he is not a voter in the FOMC this year.

At the moment, I'm not adding any trades in the precious metal. However, in the New York session, we can expect a few trades upon the release of inflation and retail sales figures. The rough idea is to take up a buy position above $1226 with a stop loss below $1223 and take profit at $1233. 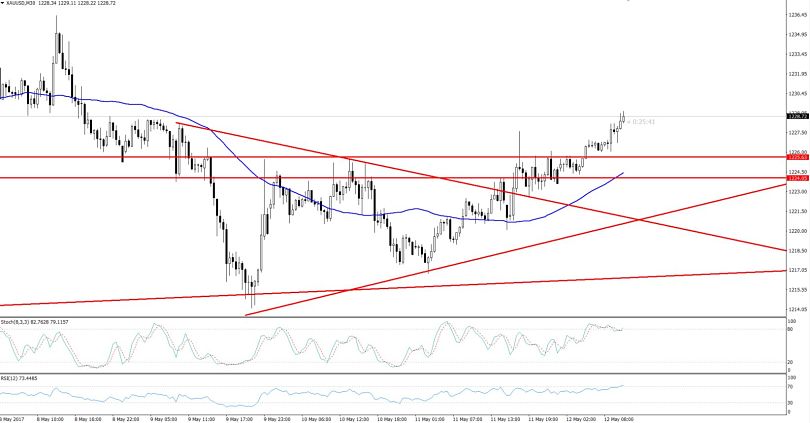 Along with the fundamental side, the technical side of the Gold is supporting the investors' bullish bias. On the 4-hour chart, we can see that the Gold prices have surged above the triple top resistance level of $1225 and the same level is extending support.

Moreover, the Gold has crossed above the descending trendline at $1226, which has opened more room for buying until $1232.

Lastly, on the 4-hour chart, the 50 periods EMA is likely to share resistance at $1233 and we can expect a pull back below this particular trading level.The RSI & Stochastic are holding in the buying zone, signaling that we can capture a few pips until $1232.

I would recommend traders wait for the New York sessions before entering any trade as we can expect a huge round of volatility upon the release of inflation and retail sales from the United States.