Forex Signals Brief for May 26th – Bulls Vs. Bears – A Tug Of War - Forex News by FX Leaders

Forex Signals Brief for May 26th – Bulls Vs. Bears – A Tug Of War

Happy last Friday of May.  So far, the market has traded in quite an unpredictable manner, certainly due to the uncontrollable factors. Anyhow, our trading signals on the forex helped us maintain the positive numbers.

Over the previous two days, the U.S dollar has remained under pressure despite due to the May FOMC meeting minutes which were released on Wednesday.

FOMC remained hawkish and dovish at the same time. Fed officials suggested it a prudent move to wait for an additional evidence that the fresh weakness in the data was transitory ahead of hiking rates.

Whereas, the Fed is also likely to consider reducing the asset-backed securities (ABS) to reduce the money supply from the growing economy. Consequently, the demand for dollar demand supported. Now let's have a look at the top economic events of the day.

Yesterday, the precious metal Gold prices continued to maintain the support above $1,252, particularly, due to the slightly weaker dollar as the major event FOMC failed to surprise the market.

Moreover, Fed Governor Brainard remarked that the outlook for the global economy now seems brighter than the than it was in previous years. Though he tried to underpin Buck, it proved a failed attempt.

Most importantly, a dramatic slump in the WTI Crude Oil prices fueled the demand for haven assets. As we know, the sudden drop in oil prices also drags the energy sector shares of U.S stock markets. In response to this, the investors switched their investments to bullion market in order to protect themselves against uncertainty. 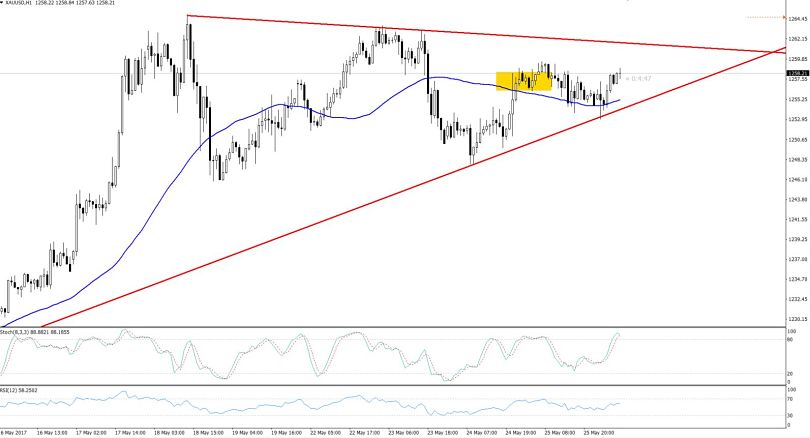 At first, let me draw your attention towards the double top pattern which can be seen on the 4 – hours chart of Gold. It's extending a significant resistance at $1263, whereas, the yellow metal has also formed the symmetric triangle pattern.

Talking about the symmetric triangle, it definitely indicates a tug of war between the bulls and bears. They seem confused about the longer term impact of the market.

Anyways, have a look at the momentum indicators (RSI = 55) as they are demonstrating an insignificant bullish sentiment of investors. The gold prices are holding above 50- periods EMA, which signifies a buying trend. Let us have a look at the trading levels of the previous metal.

Today, we aren't expecting any high impact economic event from any economy other than the United States. However, we need to focus on the Prelim GDP, Durable Goods Orders and Consumer Sentiment which are due to be released at 12:30 GMT.