In the European Trading Session, the  WTI Crude Oil prices were consolidating in a narrow trading range of $49.75 – $49.90. The Organization of Petroleum Exporting Countries (OPEC) failed to halt the bearish momentum in the oil prices.

As referenced in my previous update, WTI Crude Oil Completes 61.8% Retracement, the market turned bearish when the OPEC announcement failed to come up with something for investors. In response to this, we encountered aggressive selling for more than 350 pips.

The News coming from the United States is adding fuel to the fire. The expectations that U.S. Oil production is likely to continue to gain in the medium term has undermined the OPEC'S efforts to support the oil prices.

In the European trading session, we shared a forex trading signal to sell the WTI Crude Oil below $49.65 with a stop loss above $50 a take profit around $49.45. Our trade floated in profit for a couple of hours, but later the prices got support at $49.48, missing our take profit just by 2 pips. Therefore, we closed the trade manually in profit in order to avoid reversal.

Fortunately,  the decision was right as the prices reversed and crossed above our entry point of $49.60. 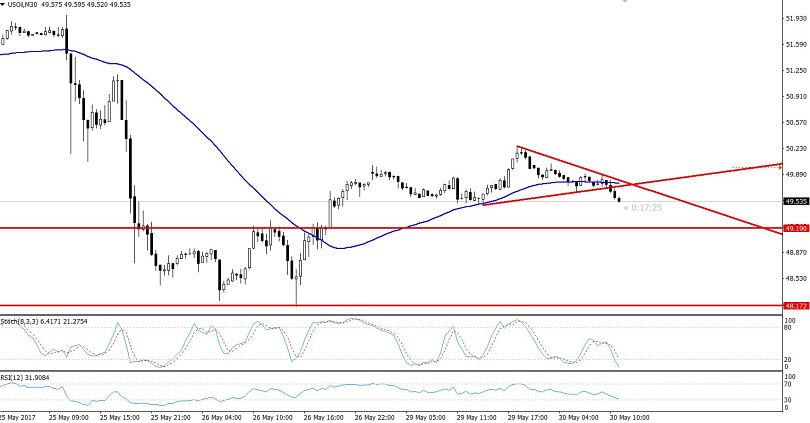 On the hourly chart, the black gold has formed and traded in a meager symmetric triangle pattern, which has extended support to oil at $49.70 and resistance at $49.90.  Yup, It's a narrow trading range.

Nonetheless, the oil broke out of the range, and that's where we decided to enter the market. At the moment, the oil has formed a candlestick hammer, which signifies a bullish reversal.

The prices are holding above the 50-periods moving average support level of $49.45, demonstrating bullish power. But the RSI (Below 50) is still trading in a bearish zone.

Now, we need to wait for the U.S. fundamentals, particularly, the CB Consumer Confidence which will be released at 14:00 (GMT) in order to get additional clues about oil demand.

Cryptocurrencies On The Bear To Close Week
1 day ago