Forex Signals Brief for June 30th – Goodbye To You “June”

We have finally made it through another successful month. Although we had some rough days, it's all part of the business. We managed to cope with the dramatic and unpredictable fluctuations caused by ongoing geopolitical tensions, monetary policy decisions and inefficiencies created by noise traders. All's well that ends well. Now, we have a long weekend to relax and enjoy the profits earned so far. Let's get ready to trade Friday, the last trading day of June.

The US dollar stretched its losses on Friday as the major central banks indicated that the cheap money is not needed anymore and it is likely to end for the Pound, Euro, and Loonie in the near future. I think we are going to enjoy the second half of 2017 due to sudden shifts in the tone of central bankers, specifically, from dovish to hawkish.

Bank of England Governor Mark Carney stunned the market by admitting a rate hike was likely to be required as the economy came close to operating at full potential. Similarly, the Bank of Canada also proposed they might squeeze monetary policy as early as July.

Today, we definitely have some important economic events to look forward to, especially from the United Kingdom, Canada, and the United States. All these events are expected to cause high volatility in the market.

GBP – Current Account and Final GDP are due to be released at 8:30 (GMT) with a negative and neutral forecast respectively. Both of these are getting a lot of attention as the market tends to fluctuate a lot upon the release of these events.

USD – We have multiple events from the United States. It is important to keep an eye on the Personal Spending m/m (12:30), Chicago PMI (13:45) and Revised UoM Consumer Sentiment (14:00) in order to determine future trends of the Buck.

The gold prices dropped as a number of hawkish remarks from the central bankers hinted at tapering and initiation of contractionary monetary policy. This increased the demand for currencies, boosted bond yields and weakened demand for the Bullion

Additionally, the German CPI inflation rate rose to 1.6% for the month of June from 1.5% (previous). This also deviated from the forecasted 1.4%, strengthening the sentiment that the European Central Bank would drive towards an elimination of some policy accommodation.

The US GDP was amended to 1.4% from a previous figure of 1.2% after the revised consumer spending which is expected to be higher than before. It signals a better and growing U.S economy, which is likely to boost the demand for the US dollar. That's why we have seen some massive dips in the gold.

Yesterday, the gold traded exactly in line with our analysis and targeted $1245 (our initial target). Today, being the last trading day of a month, most of the fluctuation depends on the release of economic figures. However, the rough trade idea is to have a sell position below $1249 with a stop loss above $1255 and a take profit $1243/41. 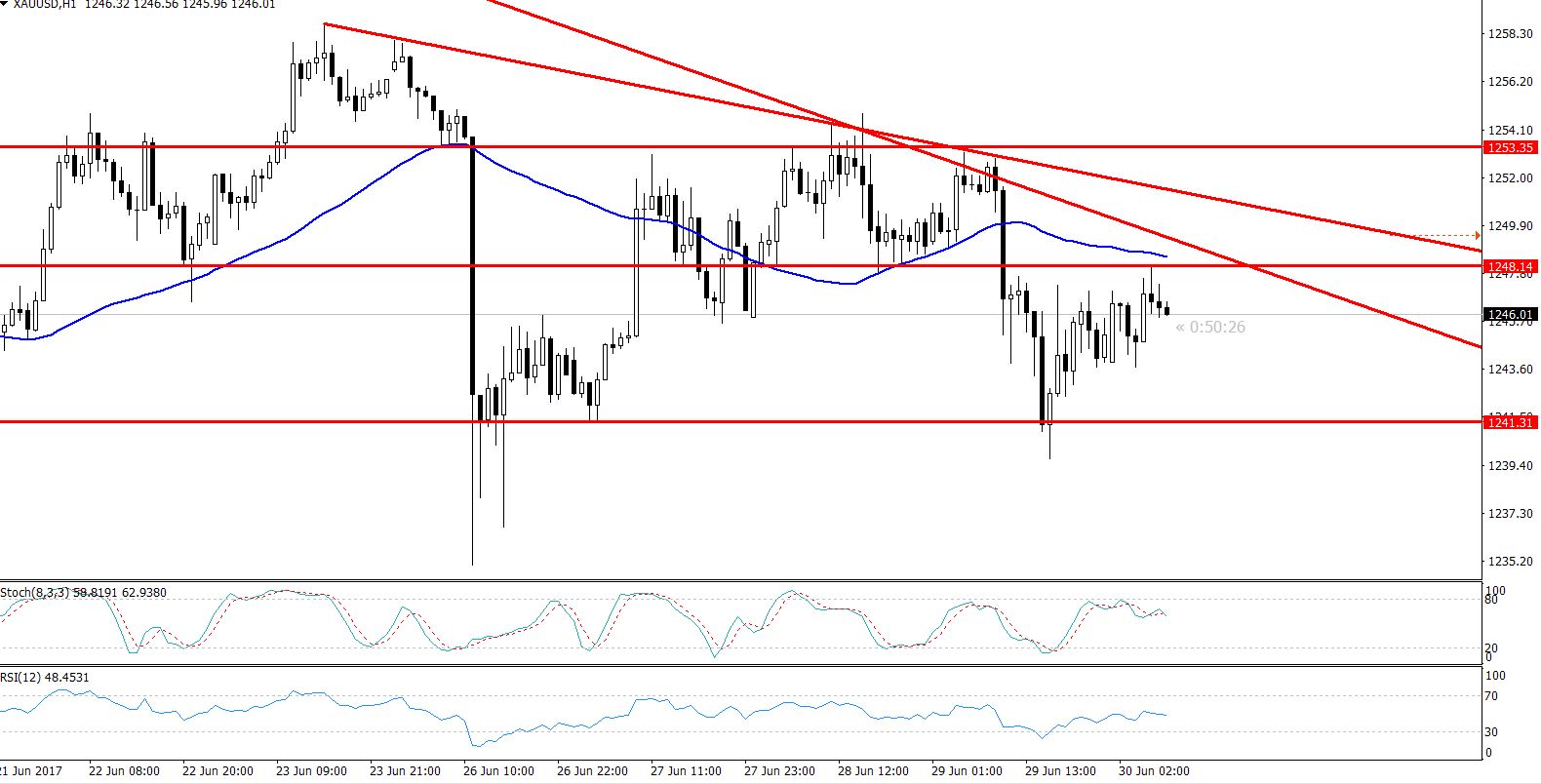 As discussed in our previous live market update, gold was trading in the symmetric triangle pattern on the daily chart, demonstrating investors' neutral behavior. Now, we have finally encountered a breakout below a solid support at $1249. Refer to our exciting article for a better understanding of the Triangle Patterns.

At the moment, the metal is trading below the same support/resistance level of $1249. On the hourly chart, we can find a descending trend line which also suggests the same level as a solid resistance.

But, the leading indicators, RSI (50) & Stochastic (62) have a slightly neutral to bullish bias because the oversold gold is retracing upward before further selling.  On the hourly chart, the 50-periods EMA is extending a strong resistance at $1248, suggesting the potential for further selling in the gold.

Today, the Asian and European sessions are likely to be quiet but the US session promises to be a game changer. Therefore we should focus on the Sterling and Loonie to ensure the best trade opportunities.

Aside from gold & crude oil, we are about to add more instruments such as CryptoCurrencies. Stay tuned for new analysis & forex signals. Refer to our new article on Cryptocurrencies for a better understanding. Good Luck!

Forex Signals Brief for February 8: USD Resumes the Course After Powell Leaves It to the Data
20 hours ago