A Quick Sell Order In GBP/USD – What’s The Chart Setup For This Signal? - Forex News by FX Leaders

A Quick Sell Order In GBP/USD – What’s The Chart Setup For This Signal?

Fundamentals such as market sentiment and politics have taken over the technical indicators, so they´re driving the financial markets at the moment. But technicals are still valid, especially for short term forex trades.

It´s tough calling long term trades when the markets are so agitated by the so many factors coming from all directions, but we can pick a few short term trades here and there based on technical indicators, which have gone pretty well during this week, despite the immense volatility.

That seems to be the case with GBP/USD now. This forex pair dived about 100 pips yesterday after UK retail sales failed to impress the buyers despite coming above expectations.

Then, the USD started tumbling when another political implication surfaced in the US in the afternoon as we briefly covered on the last forex update yesterday, and GBP took a free ride higher on that event.

But, it looks like the buyers had enough since it has stalled around these levels since last evening. These levels coincide with the 1.30 round number, which is supposed to add additional stamina to sellers. 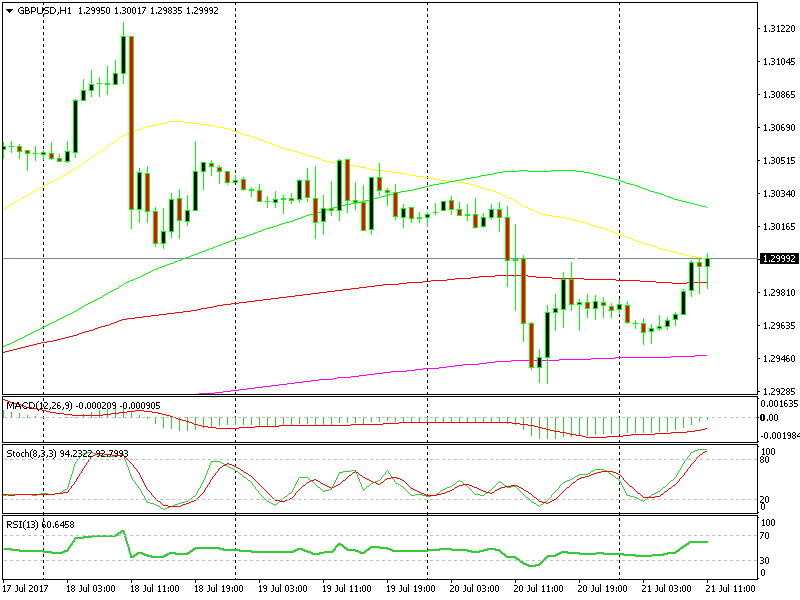 The 50 SMA is providing solid resistance

Although, the main reasons for our GBP/USD sell signal were the 50 SMA yellow and the stochastic indicator. Stochastic is overbought as you can see from the hourly chart above, while the price is having trouble breaking above the 50 SMA.

That moving average has been providing resistance in the last 2 days and it´s likely to do the same now. So, it looks like the retrace higher is over and the downtrend is about to resume on the H1 forex chart. We already took the trade a few minutes ago, so fingers crossed.

Will GBP/USD Head for Parity Too, As UK Economy Heads Into Recession?
6 days ago