Has the Aussie finally topped? - Forex News by FX Leaders

Has the Aussie finally topped?

The AUD has been on the march higher in recent weeks, catching a bid on the back of some USD weakness and a range of economic data.

Late last week we saw the Aussie try and fail at the 80 cent level. The chart is starting to look like that resistance level is going to hold in the short term, however there’s a big week ahead data wise that will likely shape things further.

This is a key level for traders as we’ve seen a lot of talk from the RBA about how unhappy they are with the currency at these levels. 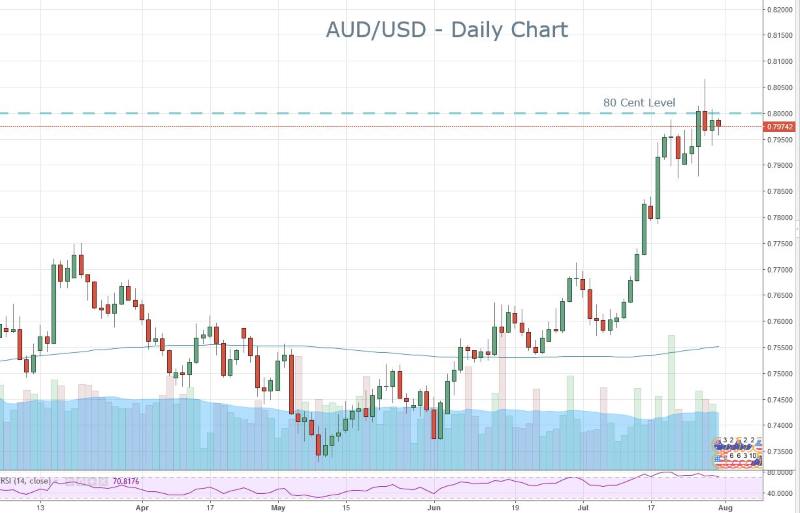 Australia is a large exporter of commodities and a lower currency benefits both the mining and agricultural sectors. As such the RBA board members have done their best to talk down the AUD and try and to push it lower.

On the back of a dovish FOMC update the Aussie rallied strongly – however that bought in the sellers on Friday and the AUD/USD came back to earth – settling around 0.7950.

Weakness in some key commodities, especially copper helped weigh on the currency pair throughout Friday’s session.

This week we have more from the RBA on interest rates, with their monthly update. After last weeks less than impressive CPI number and a muted RBA, it appears unlikely that there will be any movement in rates.

On Friday, the all important US employment data is going to be released, which will have an equally important role to play in the destiny of the Aussie.

Earlier on Monday China released data on their manufacturing that came in slightly below what analysts were predicting. Australian data wise saw a weak new homes sales number, however private sector credit was slightly above expectations.

A private measure of inflation came in 0.1% M/M which was interesting given the sluggish CPI we saw last week.

In Asian trade the AUD/USD has been reasonably quiet ahead of the European open.