Hello Kiwi Traders, Where Is Our NZD/USD Signal Headed?

A while ago we opened a forex signal in NZD/USD, as you may have noticed from notifications if you are a premium member. We decided to sell this forex pair instead of selling AUD/USD. Why?

Well, the Australian trade balance missed expectations this morning and the RBA (Reserve Bank of Australia) was sort of dovish on Tuesday. However, the data from New Zealand yesterday such as employment change and labor costs were more important and they missed expectations as well. It seemed like a sell forex trade had more chances to work on the Kiwi than on the Aussie.

This is the fundamental reason behind this trade, although we could have sold AUD/USD as well. We didn´t want to expose ourselves too much though, trading two correlated pairs in the same direction.

The technical analysis paints a pretty picture for Kiwi sellers. This pair has been trading in a downtrend for more than a week, so we´re on the right track. 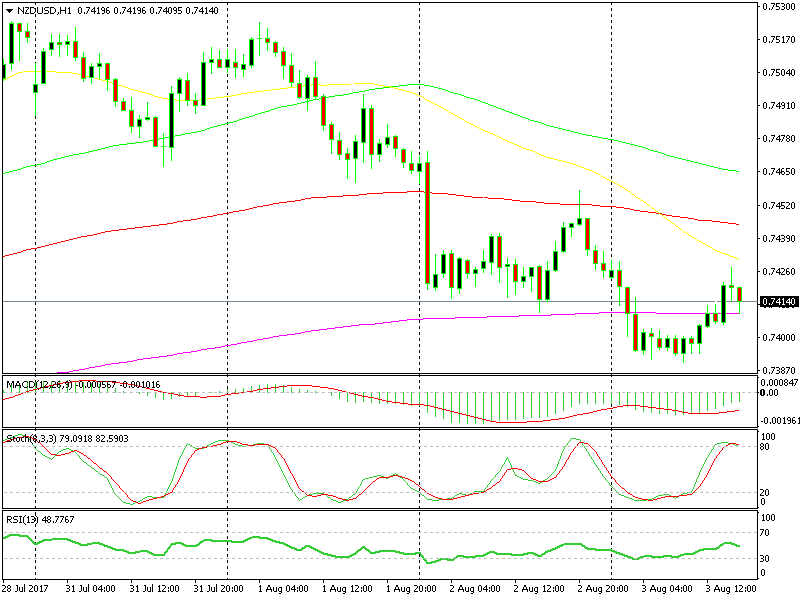 The technical picture looks bearish too

The hourly chart seems to be overbought since the stochastic indicator is at the top of the range right now and it was overbought when we opened that signal.

But the strongest selling indicator appeared just a while ago, when the last hour´s candlestick closed as a doji. The doji is a reversing signal, that specifically appears after a retrace, such as the one we saw this morning. If you´re not very familiar with candlestick formations, take a look at our candlestick trading strategy which helps explain how you to trade candlesticks.

So, both technical and fundamental analyses are pointing downward and the current candlestick looks dovish as well. Let´s just sit back and watch this pair as it slides lower, hopefully we reach take profit soon.