USD/JPY Playing With The 110 Level

Last week, USD/JPY made several attempts at the downside trying to break the big round 110 support level but the price never closed below it. By Friday we saw this forex pair make a 120 pip jump from the lows.

The level was still in play, until today. The run to safety after Kim Jong Un and Donald Trump kept flirting yesterday has finally taken us past this support area. USD/JPY dived to 109.56 according to my trading platform. 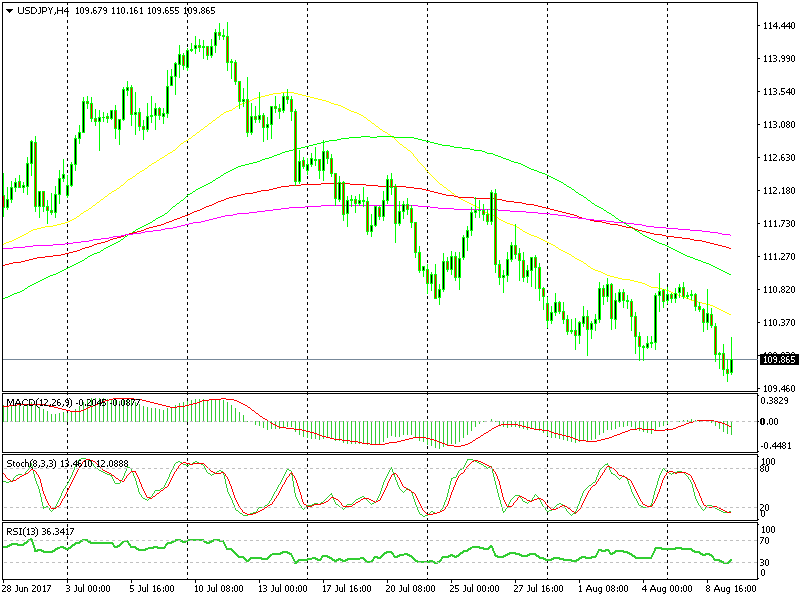 The 50 SMA held the downtrend in place once again

It didn´t last long though. The price jumped above the 110 level after the release of the US unit labor costs. The costs looked bad at first glance, but after a closer look, it was clear the report was more positive than negative.

The previous H4 candlestick formed a doji. That was a mild signal that a reverse was coming soon, although it was the fundamentals which sent this pair back up.

That being said, the break of the 110 opens the door to the next support level which comes around 108. It also puts the downtrend back in play since the price obeyed the 50 SMA on top, which has been providing resistance during this downtrend and it is still doing the same.

Another sign that the downtrend is still in place is the break of the previous low. If a downtrend must continue it should keep breaking previous lows.

The fundamentals gave USD/JPY sellers another reason to stay short and the technicals are falling in line with the fundamentals. We’re keeping a bearish bias towards this pair, despite the attempt to make us think that the downtrend was over.

GBP/USD Struggles Below Trendline Resistance $1.2300 - What’s Next?
4 days ago