If you’re an FX trader then today is the day you’ve been waiting for! It’s been a deceptively quiet week for FX markets. All the anticipation has been around what may or may not be said at Jackson Hole when proceedings finally get under way.

Jackson Hole, Wyoming is the site of the annual economic symposium where central bankers, academics, and other policymakers meet to discuss upcoming trends in central banking, the economy and what might be in store for monetary policy. Key policy makers will often give away clues into how central banks will act for the remainder of the year. For example, in 2010, when then Fed Chairman Ben Bernanke, stated that he was ready to unleash a massive stimulus program in a bid to prop up the economy. Mario Draghi followed suit in 2014 when he said that the ECB was ready to launch a full-blown QE program. 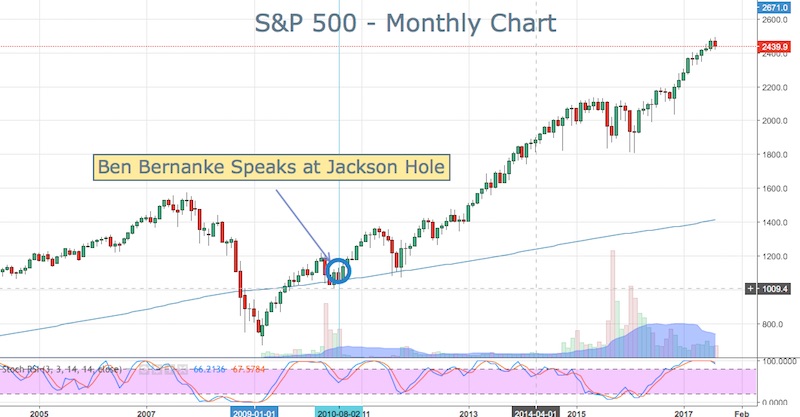 It has been mentioned by an ‘unnamed ECB source’, that Mario Draghi won’t be making any announcements on the future of monetary policy in Europe – however, at this point, it’s simply speculation. For the time being, traders are keen to hear anything related to the ECB and their asset purchasing program, the potential for rate hikes in both the US and Europe and of course the state of the US economy. The slightest hint will potentially be enough to get FX markets firing.

While the Economic Symposium will get under way on Thursday, the two key speakers won't speak until Friday.

The Fed Chairman will be speaking about financial stability. The market may be poised to reconsider the state of the economy if she suggests the US has fallen off track after the last round of rate hikes.

Attention is focused on the rate at which asset purchases will be tapered and when that might be announced. If Draghi attempts to kick the can down any further there might be implications for the EUR/USD.

Spanish GDP is due to be released at 07:00 GMT. Analysts are predicting the MoM number to come in at 0.9% which is the same as last month. GDP gives us insight into how the economy is fairing. A stronger number is positive for the Euro.

GDP is due to be released at 08:30 GMT. Analysts are predicting the MoM number to come in at 0.3% which is the same as the last month. GDP gives us an insight into how strong the economy is, with any increase giving Central Banks the potential to lift interest rates.

Initial Jobless Claims are set to be released at 12:30 GMT with analysts predicting 238,000 up from 232,000 the previous week. Jobless claims give us an insight into the state of the US economy with a higher number being negative for the USD.

Existing Home Sales are due to be released at 14:00 GMT and analysts are predicting 5.57M up from 5.52M. Home sales are another insight into the state of the US economy and are generally a market mover for the USD.

When we have important fundamental news hitting the market it’s important to use that news and trade with the day's momentum. Historically, we’ve seen what has happened to US stocks after Ben Bernanke came out and suggested the Fed was ready to launch a QE program.

Our plan today is to assess the important technical levels that we want to trade and then go with the momentum. Should any fundamental news come along, that will cause the price to break out of its range. It’s also important to note that even no news is enough to get markets moving. If Mario Draghi underwhelms the market with his speech – then we will still get a strong reaction. 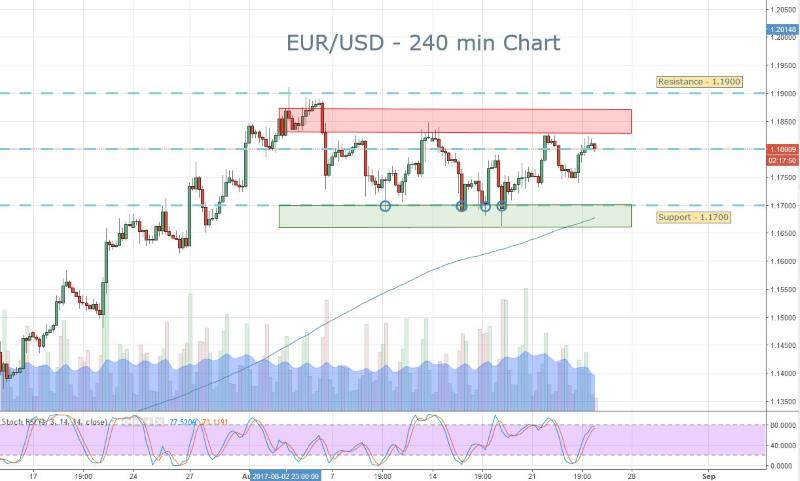 Given the fact that we have to wait for Friday before we hear from both ECB President Mario Draghi and Federal Reserve Chairman Janet Yellen, there is still the potential for us to stay somewhat range bound.

If there is no fundamental news coming out of Jackson Hole, I’ll be looking to get long on any breaks below 1.1700 and to short above 1.1825. If anything changes then we want to go into breakout mode and trade with the momentum. Up until that point, the economic data releases mentioned above will still have an impact on both the EUR and USD.

Jackson Hole has the potential to be a great couple of days for traders if you’re prepared and have a good plan in place. Best of luck and let’s hope Mario and Janet come out firing!