According to the Double Top Strategy Ethereum Should Dive Below Zero, but I’m Still Looking for Longs - Forex News by FX Leaders

According to the Double Top Strategy Ethereum Should Dive Below Zero, but I’m Still Looking for Longs

After an epic run higher for Cryptocurrencies during this year which has increased the price of Ethereum by about 5,000% (yes, that’s right), we are seeing a retrace in the last few weeks.

Now, the double top trading strategy suggests that the price falls the same amount after breaking the neckline as the difference between the neckline and the double top. The problem is that if this chart pattern is to work, Ethereum is supposed to dive to -$100. Can a currency, even a digital one, have a negative value?

Here are some of the best brokers for Ethereum if you are trading cryptos: 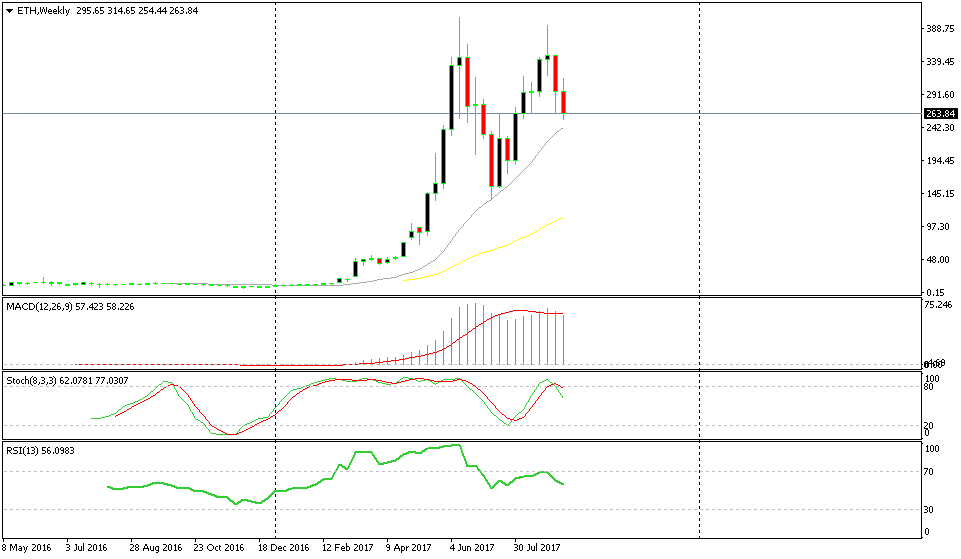 Should we go with the double top or with the moving average?

So, this pattern can’t work here, but there’s another trade in sight. We are approaching the 20 SMA (grey) on the weekly Ethereum chart which has provided support throughout this year, and the chances are that it does so again this time.

If that’s the case, then going long here with a stop below the 20 SMA is worth the risk since the reward is huge. The stochastic indicator is still heading down after reaching the overbought area 2-3 weeks ago, so the retrace is not over yet.

So, we will have to wait until next week to see if stochastic gets close to the oversold area. That would make the weekly chart oversold and the odds of a reversal higher, and a continuation of the uptrend would increase. I’m staying on the sidelines and watching the charts until then because the moving average is still $20 (2,000 pips) below the actual price which is immense for a normal forex trader.