Last week was all about stocks and the US dollar. With Janet Yellen and coming out and sparking more talk of rate hikes, the USD continued to grind its way higher. US equity markets did what they seemingly do best and kept the upward momentum going, with the major indexes making fresh highs.

In early trade on Monday, the Euro has quickly come back into focus as it appears the independence referendum in Catalonia, has gotten underway with violent scenes. Catalonia is a wealthy region of nearly 10 million people in Spain with its own language and culture. However, it’s not recognised as a separate nation under the Spanish constitution. The push for independence is likely to continue to put downward pressure on the Euro as there are significant levels of uncertainty surrounding the vote.

Can the USD Continue its Rally?

The USD has slowly been turning itself around, thanks largely to the Fed and the newfound eagerness to hike rates by years end. However, this week the dollar will have to contend with U.S. employment data, which is likely to have a big say in how the week wraps up.

As it stands I feel that the USD is at the bottom of its range, and currently below the 10-period moving average. As a result, I think we can push higher and up towards the 93.50 mark by weeks end. However, I won’t be holding trades into the employment number on Friday. 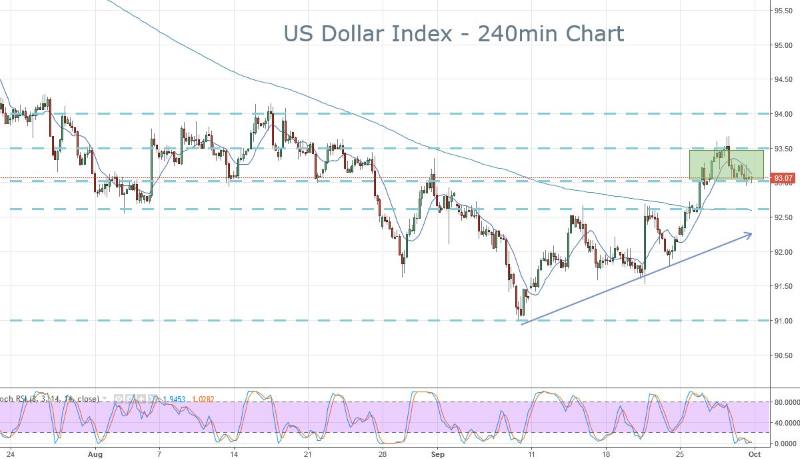 There’s a public holiday in Australia so there is likely to be lower levels of liquidity and volume during the Asian session on Monday. Markets will be keenly awaiting this month's instalment of the US non-farm payroll data, which will be the big market-mover of the week.