The heavyweights of forex are meeting today in Frankfurt for a conference regarding central bank communication. The markets are not particularly worried about this event, but I can feel that the market is sort of cautious just in case those guys throw a bomb out of the blue. 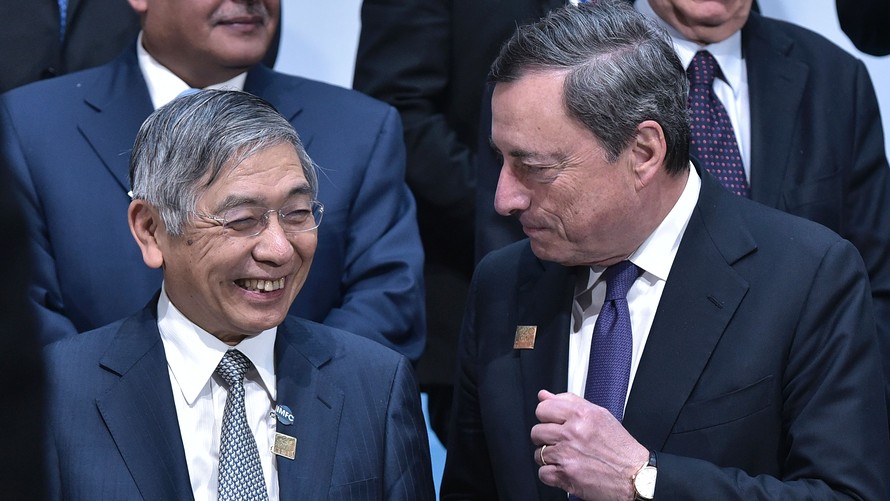 These two guys always have a great time together.

The Euro Had a Great Morning in an Uncertain Market

The market has continued to trade in the same way as yesterday. There hasn’t been a clear direction: USD/JPY climbed higher in the early European session, but it has given back the gains now. Commodity Dollars continue to slide lower particularly the Kiwi which has lost about 60 pips this morning.

The price action in the British Pound has been sort of funny, but it moved lower against most major currencies after the UK inflation retreated somewhat. The yearly CPI (consumer price index) number remained unchanged at 3% against 3.1% expected, but the monthly number turned lower.

Inflation picked up last month by 0.3% in the UK, while this month it dropped to 0.1%. GBP lost a handful of pips after the release this morning, but to me, this is positive for the UK considering that the economy is sort of shaky at the moment and the Brexit clock is ticking.

The Euro, on the other hand, had a terrific morning. At 0.8%, the German prelim GDP report for the third quarter came out two points above expectations. Euro traders started feeling more confident after the release and EUR/USD finally took out the resistance at 1.1660-80 for the first time in about three weeks. Although, right now this forex pair is at an interesting area which is giving me a few ideas, but I will post another forex update about this soon.

Big Guys Are Having A Meeting

The magnificent four are getting together in Frankfurt today at the ECB (European Central Bank) headquarters. They’re talking mainly about public relations and communication, and I heard some good comments. They’re saying that forward guidance of the monetary policy has been effective, which is only half true if you ask me.

But, FED’S Yellen also said that too many voices might be confusing for the markets. Blimey, did you just realize that? Time after time, we hear different FED members, as well as ECB or BOE member, contradict each other.

We understand that a group of people is more rational when taking decisions, but we don’t have to hear all their secrets. It confuses and distorts financial markets, which makes trading a lot harder. That has become even harder now that politics have entered the forex market as well especially in the last two years.

Hopefully, the big guys will decide to make communication a bit more compact for central banks, instead of getting all sorts of contradictory comments from every board member. Trading forex would be a lot more straightforward on this front at least.

This forex pair has been trading in a strong uptrend during the last two months, so the pressure remains on the upside. There was a retracement lower last week which was due, but it seems that the retrace is over. Yesterday the price started climbing higher after consolidating for a couple of days, so this pair has resumed the uptrend. 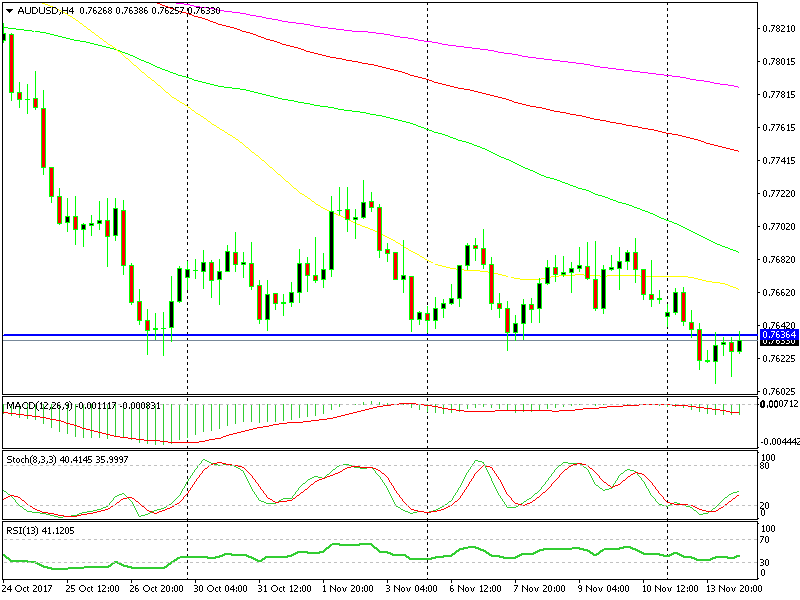 This is the make-or-break line for AUD/USD today.

AUD/USD has resumed the downtrend after two weeks of consolidation and yesterday it broke below the support at 0.7630-40. Now that support has turned into resistance. Besides, the hourly chart is overbought now so the retrace higher must be over. We already opened a sell signal a while ago here.

The central bankers are still at it and soon the question and answer session will start if it hasn’t already. We might hear some interesting comments, so I’ll keep an eye on it. Also, the US PPI (price producer index) report will be released soon. Hopefully, we will get some decent price action from it.