Majors On Wednesday: Is the AUD a Sell? - Forex News by FX Leaders

Majors On Wednesday: Is the AUD a Sell?

It was a pretty quiet day for forex traders on Tuesday. Monday seemed like it might have been the day that everyone wanted to get their business done. Stocks, on the other hand, kept on marching higher, as the S&P 500 broke out to put in yet another all-time high.

The story of the day was probably just that the USD was weak and a few currencies, notably the AUD found a bit of a bid. Some hawkish talk from the RBA helped the Aussie spike a little bit, but for the most part, this might just be setting up for another good short opportunity.

Over the last few weeks, the FX Leaders Team have been hitting the commodity currencies hard, particularly the Aussie and Kiwi. As it happens we have another open sell signal in the NZD/USD which is travelling along nicely.

The Aussie, on the other hand, is also setting up for another short, in my opinion. As it stands we are currently at support turned resistance. This wouldn’t be a bad level to enter. I’m also watching he 0.7600 level quite closely as I think it will provide some decent resistance. 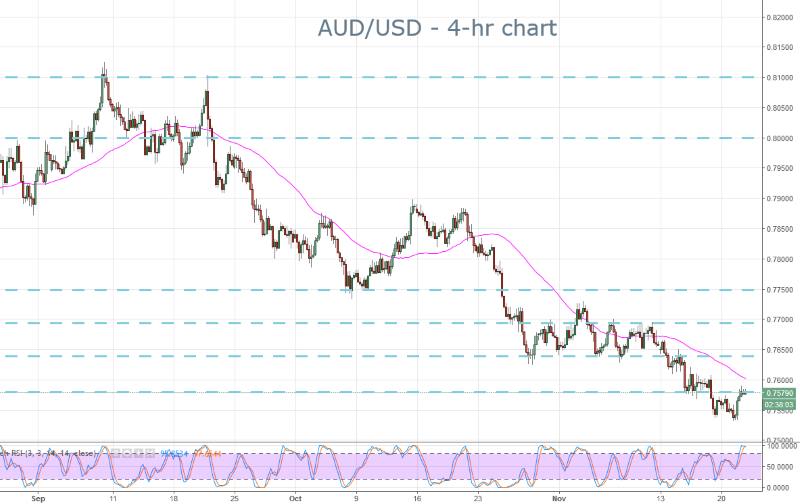 But just remember that today we will have the FOMC minutes out. There is every chance of a bit of volatility in the USD as a result. However, as we’ve been seeing, volumes are slowly trailing off as Thanksgiving approaches.