UK GDP Holds Up but GBP is Feeling Shaky

The UK Gross Domestic Product (GDP) report was just released and was a bit relieving: Nothing great, but it wasn’t a disaster either. The GBP, on the other hand, is not taking it very well.

The headline GDP number came at 0.4% as expected. That’s a relief in itself considering that two quarters ago the UK GDP was sinking and heading towards contraction. It has ticked up a point in each of the last quarters, so contraction looks a bit far now.

Looking at the details, the picture doesn’t look too bad either. Fixed capital formation declined to 0.2% from 0.6% previously, but private consumption was quite the opposite, increasing by 0.6% this month, from 0.2% previously. 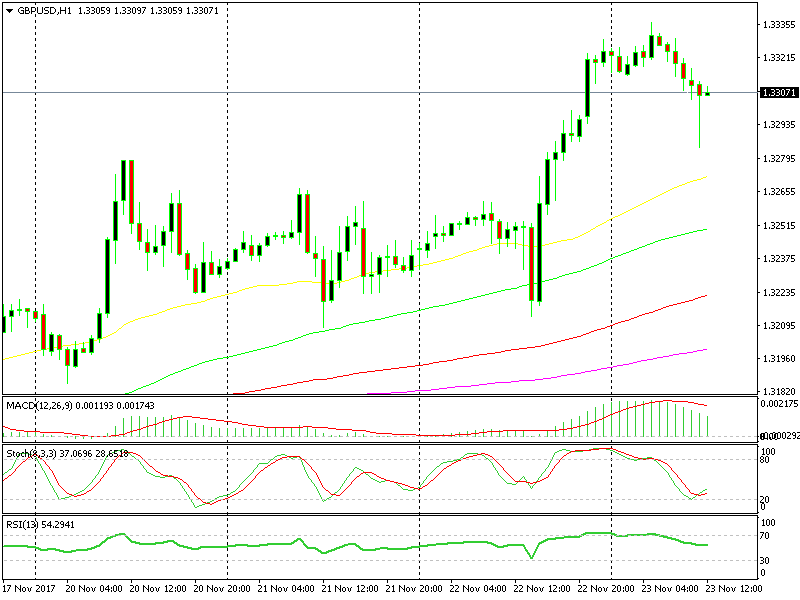 Waiting to reach the 50 SMA (yellow).

As we said, GBP didn’t take it that well as it lost around 25-30 pips right after the release, but it already was on a retracing mode after the surge yesterday, especially against the USD. At the moment though, GBP/USD is climbing back up.

I was waiting for the price to reach the 50 SMA on the hourly forex chart, but it came 15 pips short. The chart setup would be pretty bullish if GBP/USD reached that moving average because it has provided support previously and stochastic is already oversold. I will wait for the 50 SMA to catch up in order to open a long forex signal.