Last Friday we opened a sell forex signals in NZD/USD. The chart I was counting on was the H4 timeframe, which looked pretty bearish.

As you can see from the chart below, this forex pair has been trading in a downtrend for the last several months. We were waiting for a retrace higher as we usually do when there is a downtrend in play. 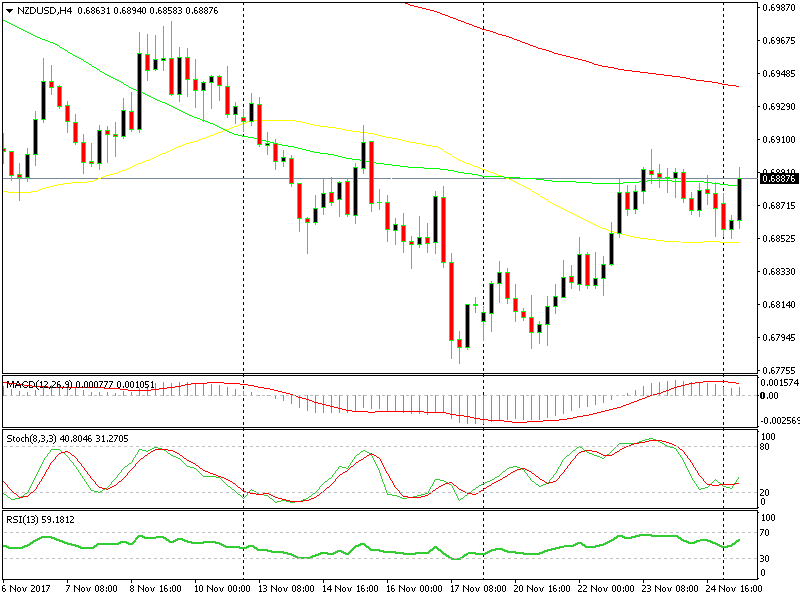 The 100 SMA did reverse the price lower.

That retrace took place during the second half of last week, so we waited until the signs all lined up. What were these bearish signs? See below:

As you can see from the H4 forex chart, the stochastic indicator became overbought by the end of the week, which was the main signal that the retrace might be over. Another bearish indicator was the 100 SMA (green). This moving average got broken for a short period of time, but the sellers managed to push back below it pretty quickly.

Besides that, the price formed a few dojis and pin candlesticks which are reversing signals after a trend or a retrace. The retrace was over indeed, and NZD/USD slipped lower overnight, so we took our pips.

This forex pair is back up now after a sudden jump in the last couple of hours. The H4 chart is not overbought yet, but the H1 chart is, so we might open another sell signal soon. We’ll wait to see how this hourly candlestick will close in order to get another confirmation about the downside.