The US unemployment claims report came out a bit mixed, but it was still on the hawkish side. Unemployment claims remained around the same level as the last 5-6 months, inflation picked up a tick and personal spending and consumption beat the expectation.

Although, if we see last month’s spending, this month’s number is a lot smaller, so that has dented this otherwise positive report. 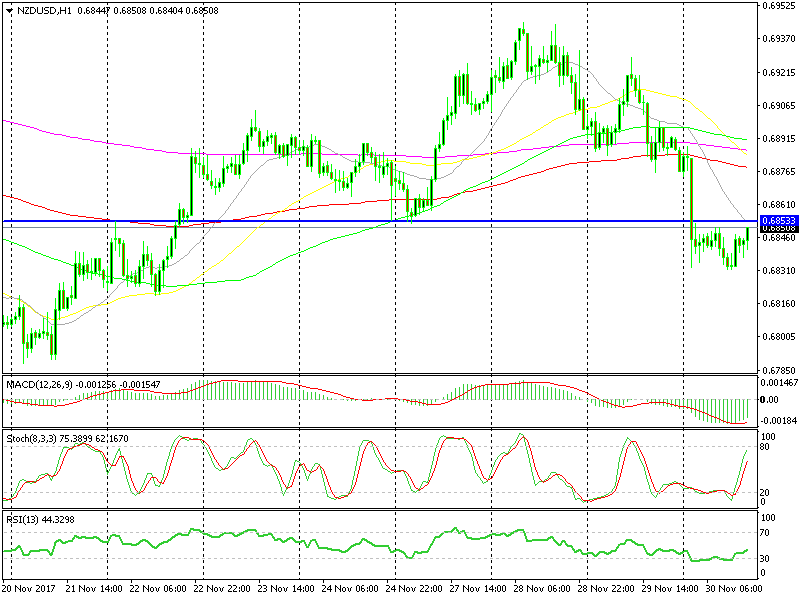 Now this area is supposed to provide resistance

Yet, the USD is not getting any love apart from a quick kiss immediately after the release. The Buck has slipped 20 pips lower and NZD/USD has climbed higher after the hard time it had last night.

This latest jump has taken this forex pair up to 0.6850s which has been the swing low and the swing high for a few times before. That means that this level has been acting as support and resistance prior, so it is likely it does the same again now.

Besides that, the 20 SMA (grey) is standing just on top now on the hourly NZD/USD chart. Also, the stochastic indicator is almost overbought which means that the retrace up is almost done.

Considering all these technical indicators and the sentiment which is bearish for NZD, we just opened a sell forex signal here. Now the sellers have to do the job for us, hopefully, a reverse lower will follow later today.