The Canadian Dollar has taken off after the GDP report was released. It was a decent report to be honest. The monthly GDP number came back to positive territory after two negative months, while the annualized number beat expectations.

New jobs posted a decent gain as well; they jumped to around 80k against 10K expected. But that’s not all; the unemployment rate dropped to 5.9% from 6.3%. That’s a huge decline for just one month and it is supported by the higher jobs number, so it’s not a distortion due to other factors. 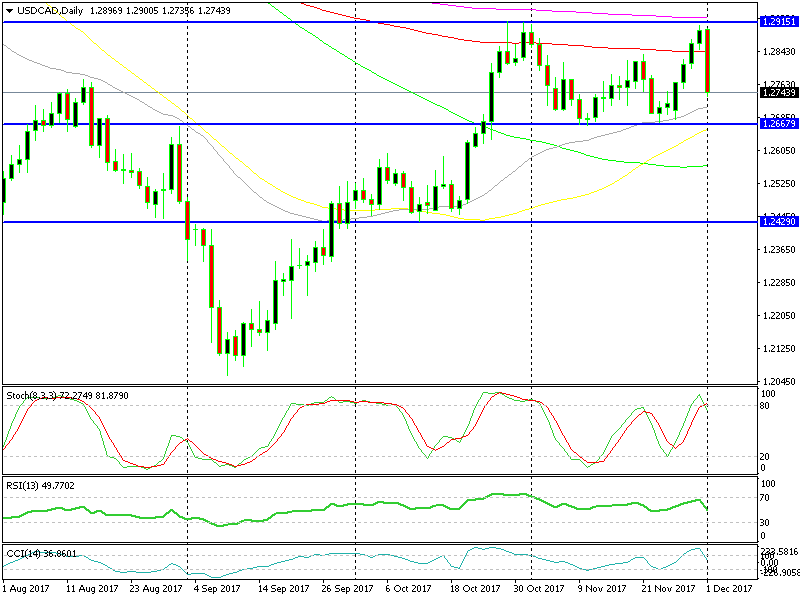 The 20 SMA (grey) is the first obstacle for sellers

CAD traders didn’t think twice and they sold USD/CAD immediately after the release, meaning that they’re buying the Canadian Dollar. The algorithm based systems did their job in the blink of an eye so we couldn’t get in on that forex trade.

But there are still opportunities to trade this forex pair. As you can see on the daily USD/CAD chart, the stochastic indicator is oversold and it is just turning down. Besides that, the 200 SMA (purple) provided resistance for the second time.

The important thing here is not the fact that this moving average provided resistance again, but that a double top has formed. In this case, a double top means that the price will likely lose around 250 pips if it breaks below the neckline, which is the middle line. The target is the bottom line. I like to sell the double tops near the top to reduce the exposure, but that train has already left, so we will wait for the break of the neckline.