Two Moving Averages and A Trendline for the Euro. Monthly Chart Analysis

We have mentioned many times that the US Dollar has been in a constant decline throughout last year. As a result, EUR/USD has climbed more than 20 cents during this time without much of a retrace. The only decent pullback happened in Autumn when this pair retraced 500 pips lower.

The buyers pushed above 1.25 last week, but the sellers returned and this pair bumped off that level. Now we are at 1.2370s. I don’t think that we will break the lows at 1.0350, but there’s a good chance that we will see a reversal from here. 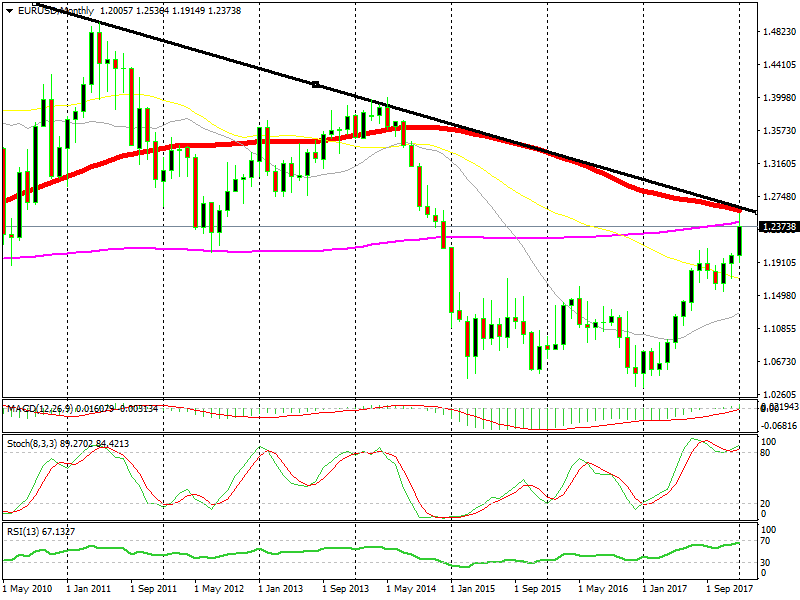 Three technical indicators are pointing down

As you can see above, a trendline has formed, connecting the highs from back in 2008 before the global financial crisis. That moving average comes at 1.2590. That’s as good as 1.2530, which was the high last Thursday. Don’t expect the technical indicators to fall exactly to the pip in these large timeframes, such as the monthly chart that we are analyzing.

The monthly candlestick opened at 1.20 on New Year’s day. We are not too far from there now. In two days anything might happen, we might even close below 1.20. The FED meeting is on Wednesday evening on the 31st of January, so we might really close below 1.20. If that happened, it would be a massive bearish signal. But first, let’s see what the FED has to say.

Check out our free forex signals
Follow the top economic events on FX Leaders economic calendar
Trade better, discover more Forex Trading Strategies
Related Articles
EUR/USD Facing the 200 SMA As Sentiment Remains Negative
We have turned bearish in EUR/USD as the bullish pressure fading and the price heading for 1.07 now
13 hours ago
USD Ending the Week Up As Data Shows No Recession
The USD is looking quite bullish now after a rollercoaster ride during last weekend
2 days ago