EUR/CHF Returns Back Below the 20 SMA

Yesterday, we opened a sell Forex signal on NZD/USD. After last week’s 350 pip fall, this pair had retraced higher over the previous few sessions. The 20 SMA (grey) provided resistance on the H4 chart, while the 50 SMA did so on the H1 chart. 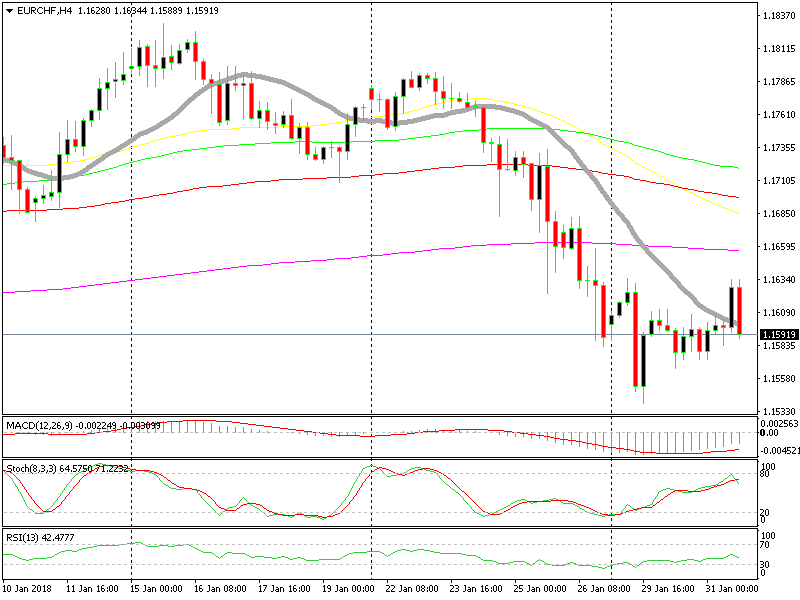 The price reversed back down when stochastic became overbought

The market didn’t have enough of the upside, and today buyers pushed above the 20 SMA on the H4 timeframe. We were just a mere 5 pips away from SL at one point.

Buyers, however, soon gave up, and the sellers returned. I don’t see any reason why this quick reverse would have happened. That being said, it took us approximately 60 pips lower, and our Forex signal here just hit take profit (TP).

Perhaps the Swiss National Bank chairman Jordan said something, but based on my research, it doesn’t seem that way. Perhaps buyers wanted to see the stochastic indicator overbought before unloading their buy positions.

The price returned back below the 20 SMA, and the picture is now looking quite bearish, becoming bullish on the larger timeframes, as well. The price has broken the 50 and 100 SMAs on the daily chart, so we will look to sell this Forex pair until it becomes bullish once more.