Giving EUR/CHF Another Ty on the Short Side

On Tuesday, we opened a sell Forex signal on EUR/CHF. Last week, this pair suddenly became bearish, following many months of trending up, and breaking below the 50 SMA on the daily chart last Thursday. This moving average had been keeping the uptrend in place, and that was the signal we were waiting for.

When we went short on this Forex pair, it hit take profit (TP), but not without putting up a fight. The price broke above the 100 SMA on the H1 chart yesterday, and got close to stop loss (SL), eventually returning back down and losing approximately 100 pips in total. 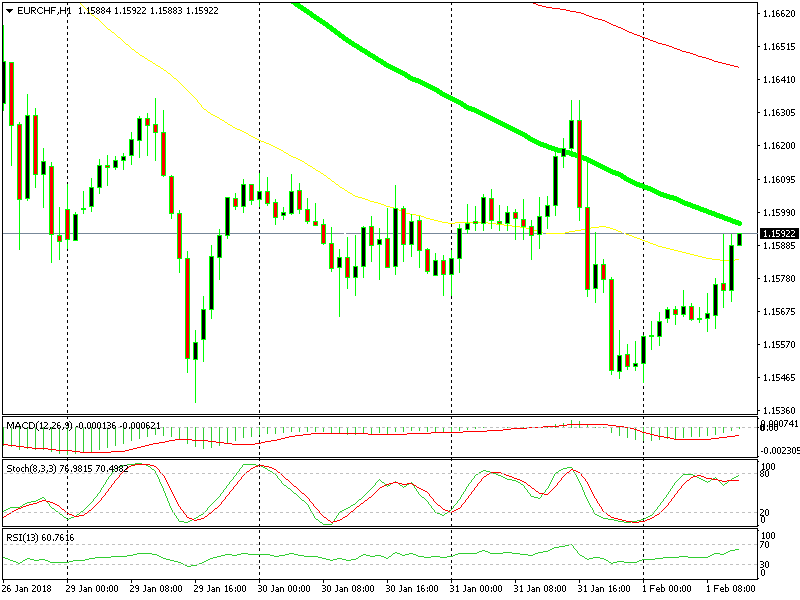 The 100 SMA should provide resistance

This morning, we are seeing yet another retrace higher. The price is flirting once again with the 100 SMA on the hourly chart. This moving average comes just below the big, round level of 1.16, which is a major resistance area in itself.

We just opened another sell Forex signal on this pair. The price has continued climbing for approximately 10 pips, however, it now looks as though the 1.16 level is scaring buyers. Hopefully, the sellers will return, and this pair will move lower.