Forex Signals US Session Brief, July 4 – Another Good Day for the UK Economy

The UK service sector made a nice turnaround today

The British economy took a bearish dive in the first half of this year. In fact, even the US and the EU economies have slowed down during this period, but the UK economy was really in a tough spot as the economic data has showed. This week though, we have seen some decent numbers from Britain.

On Monday, the manufacturing PMI report remained steady at a decent level of activity. Yesterday, the construction PMI was better than expected, while today the services PMI posted a 55.1 PMI number. That’s particularly good, considering this sector was heading towards negative levels in April and May. The GBP is finding some nice bids as the economic situation improves. Now I see why Saunders from the Bank of England sounded sort of hawkish yesterday. Anyway, today has been mostly about services as the report from Europe and the UK were published in the morning, so let’s have a look at the data.

Spanish Services PMI MoM – The Spanish services were expected at 56.3 points but came at 55.4. This is the weakest reading this year. The composite was also pretty weak considering that this sector has performed quite well in Spain.

Italian Services PMI MoM – The expectations for Italian services were at 53.3 points but came a full point higher at 54.3 points. That’s a nice turnaround from the 52 region that this sector was during Q2, so that offsets the weak numbers from Spain.

French Services PMI MoM – French services missed expectations too, just like in Spain. Although, at 55.9 PMI points, the services sector remains at a good spot in France.

German Services PMI MoM – The German services offered another surprise as they beat expectations and came at 54.5 points. That’s another nice turnaround, because the last three months were at the 52 point region.

Eurozone Final Services PMI MoM – The increase in Italian and German services led to a higher number from the Eurozone. It came at 55.2 PMI points against 55.0 expected. This should be positive for the ECB and the Euro because it will help the GDP in Q2 after softer numbers in April and May.

UK Services PMI MoM – The biggest surprise was the positive reading from UK services. They came at 55.1 PMI points, beating expectations. The previous two months we saw numbers such as 51.7 and 52.8 which put this sector close to contraction since the 50 level means breakeven, as we forex traders are used to calling it.

Oil Out of the Agenda Says Kremlin – Putin and Trump will meet in Helsinki next weekend but Russian officials said that is not the main thing. Although, Trump might have other things planned because last weekend Trump tweeted that Saudi Arabia agrees that Oil prices are too high. The trade war will surely be on the agenda.

Iran Says Oil Sanctions Will Harm the US – Iranian officials said that the sanction on Iranian Oil from the US will only increase the price. Although, Saudi Arabia is siding with the US and the output will increase as it was agreed in the OPEC+ meeting.

US MBA Mortgage Applications – US mortgage applications declined by 0.5%. This is the second negative month after the 4.9% decline last month. The trend doesn’t look good but the decline has slowed.

China Will Retaliate Only After the US Takes the First Step – The Chinese officials said earlier today that they will not fire the first shot on implementation of tariffs and will do so only when the US does. Well, the US tariffs will be implemented on July 6th so it’s only two days of truce before the war starts. 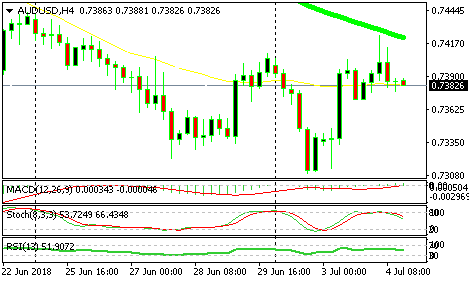 The retrace up ended right at the 100 SMA (green)

AUD/USD looks good for sellers at the moment. The trend has been bearish for several weeks and the retrace up looks complete on the H4 chart. The 100 SMA provided solid resistance today and it seems that the buyers closed their buy trades up there. The stochastic indicator became overbought and it is now turning lower. This chart setup looks bearish to me but the sellers must break the 50 SMA first before the downtrend resumes again.

There is no economic data in the afternoon today. The US is closed for the 4th of July Independence Day so the market is expected to grow increasingly quiet as the day progresses. We can use this time to make some long term analysis and plan some trades for tomorrow though.