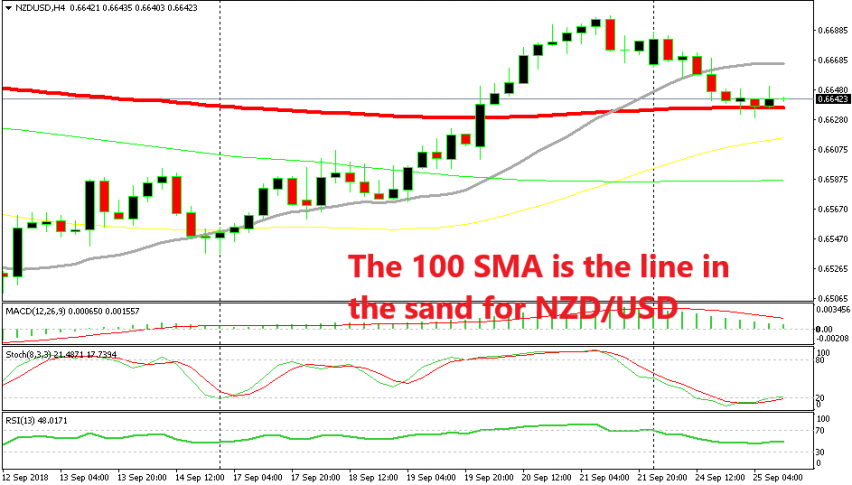 NZD/USD Finds Support at the 100 SMA

Below the 100 SMA and the bears remain in control, above it and the buyers are in charge

Last Friday we opened a buy forex signal in NZD/USD. We decided to go long on this pair as it retraced lower on the hourly chart, after being in a strong bullish trend the entire week. The retrace looked complete as the price approached the 50 SMA and stochastic became oversold.

The buyers had a couple of attempts, trying to reverse NZD/USD and resume the bullish trend. But, the price didn’t reach our take profit target. The price continued lower as the new week got underway. It was also pulled lower by weakness in other commodity currencies such as the decline in AUD/USD.

The 20 SMA (grey) provided some form of support last morning, but the sellers were in full control. They managed to push past that moving average despite other risk currencies being in demand, such as EUR/USD and GBP/USD which ended the day higher.

But, the decline in NZD/USD stopped at the 100 SMA (red) yesterday and it hasn’t been able to break below it since then. The price has found solid support at this moving average and it looks like we might see a bullish reversal from here since stochastic is oversold.

The economic calendar is pretty light today to do the job, so we will have to follow the price action to see if the sentiment turns bullish for this pair.