The market reaction to these elections was pretty dull this time

The US midterm elections were held yesterday and the Democrat Party won the Congress as expected. There were more than 30 Republican seats to be voted for and Democrats needed to win just a few to take control of the Congress, which they did. Although, the Republicans extended their Senate seats, so these elections were somewhere in the middle of the road, just like the general elections two years ago. It could mean some trouble for the White House administration to pass budget, tax cuts or immigration laws, but overall, the situation will remain pretty much the same as it is now.

In trade terms, things are poised to remain as they are and the clash with China is expected to continue. The FED will keep the same path regarding the monetary policy, so the picture is little changed for the USD. We might see some more weakness after the initial decline after the market got to terms that Democrats had taken the Congress, but the volatility has diminished and the USD is now pushing back up. The market was building up for a big shock, but we didn’t see a blue (democrat) wave sweeping up as Democrats were hoping for, so the market is realizing now that especially the economic policies will remain pretty much the same and stock markets are climbing, while Gold and the JPY are declining. This means that the sentiment is turning positive now, so that was it for US elections. 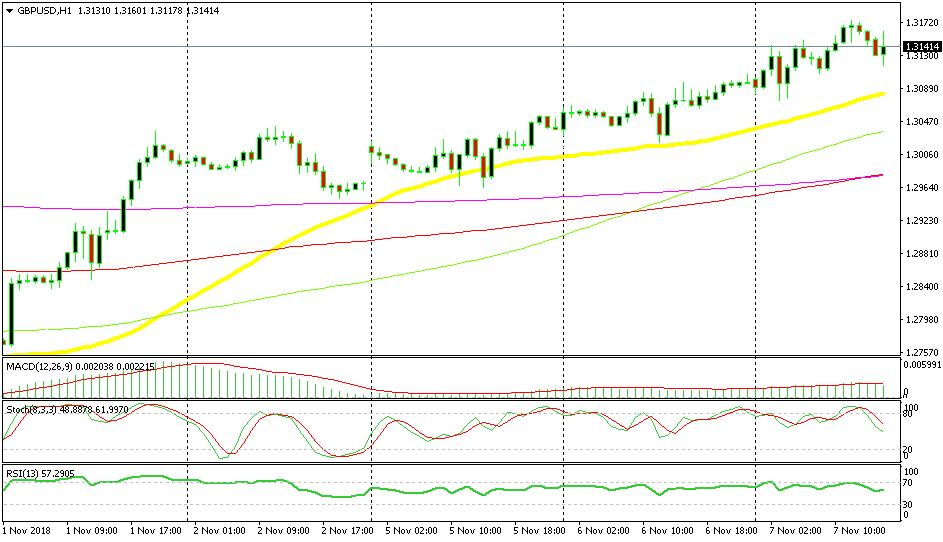 The 50 SMA is catching up

GBP/USD reversed the bearish trend last week and has entered a bullish period, climbing nearly 500 pips during this period. It is slightly retracing now after the surge on US election results, but the retrace is much smaller than in other pairs, so the buying pressure is still on. We are thinking of buying this pair when the price reaches the 50 SMA (yellow). By that time, stochastic will be oversold which means that the retrace will be complete.

OK, so the US midterm elections are now over and the reaction in financial markets seems to be over as well. Not that there was much action, I was expecting some bigger shock moves but that was it. Now the market attention will shift to Brexit and the international trade disputes. It just gets a bit easier for forex traders.