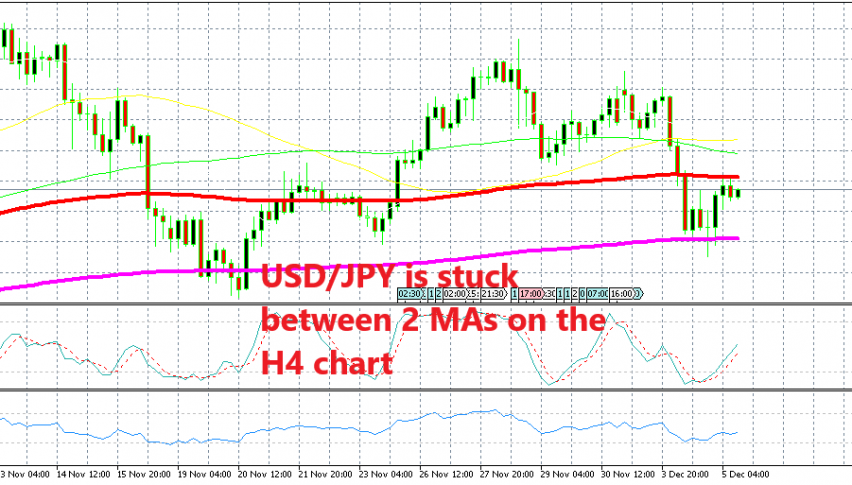 Which moving average will go first?

The negative sentiment in financial markets yesterday gave this pair another kick lower and USD/JPY declined as low as 112.58. As you can see from the H4 chart above, the price pierced the 200 SMA (purple), but the sellers failed to hold the price below that moving average.

This means that the 200 SMA wasn’t broken and it turned into support after that failure. The price formed a doji candlestick yesterday right above that moving average, so a bullish reversal pattern formed. USD/JPY climbed 50 pips higher overnight during the Asian session, but another moving average ruined the plans for USD/JPY traders, this time for the buyers.

That’s the 100 SMA (red) which stopped the bullish momentum last night and it turned into a strong resistance indicator this morning. Now the price is trading right below this moving average and the stochastic indicator is almost overbought.

This means that the bullish retrace of the recent downtrend is almost complete and since the 100 SMA is providing resistance, we might actually see a bearish reversal soon. But, USD/JPY must remain below the 100 SMA for that scenario to unfold, because if it moves above, then the sellers will get cold feet and the buyers will become even more confident. I might go short soon, close to the 100 SMA to be honest.

Booking Profit on Our AUD/USD Buy Signal, Following the US Employment Report
22 hours ago