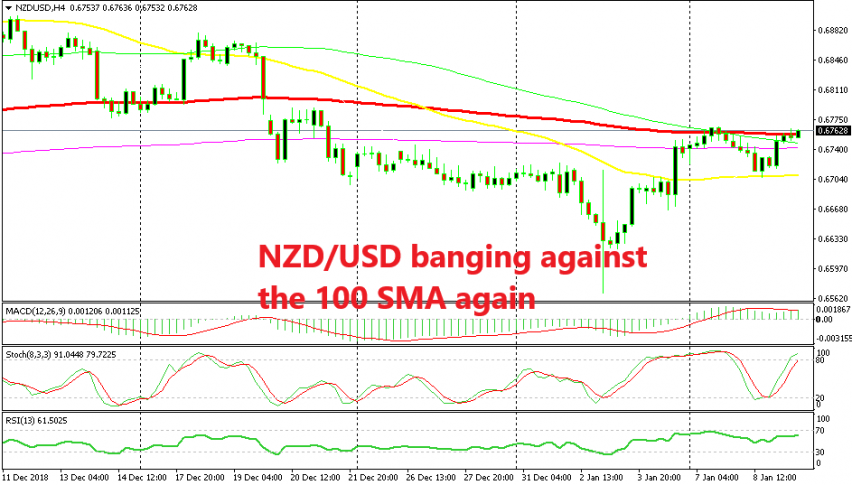 The main trend is still bearish for NZD/USD

Yesterday we had a winning forex signal in NZD/USD which we opened last Friday as this pair was retracing higher after trading on a bearish trend for about a month. We sold below the 100 SMA (red) on the H4 chart and booked profit yesterday as the USD received some bids, sending NZD/USD lower.

Although, the 50 SMA held its ground, as you can see from the chart above, and it reversed higher overnight during the Asian session. Stochastic became oversold yesterday, so this latest bullish move makes sense to some degree.

But now, the stochastic indicator is overbought, which means that NZD/USD is overbought on the H4 chart. We are back to the 100 SMA which has worked as support and resistance previously, and it is likely to provide resistance to this pair once again.

The previous H4 candlestick formed a doji which is a reversing signal, so the chart setup seems right for a sell trade, which we opened a short while ago if you follow our signals. This pair has just popped 10 pips higher meanwhile, but this doesn’t count as a break until the current H4 candlestick closes above the 10 SMA and the price is pretty close to the it. So, it is likely that the price dives back down below the 100 SMA and then it will probably resume the downtrend.

Inflation Picks Up in New Zealand Too
1 month ago