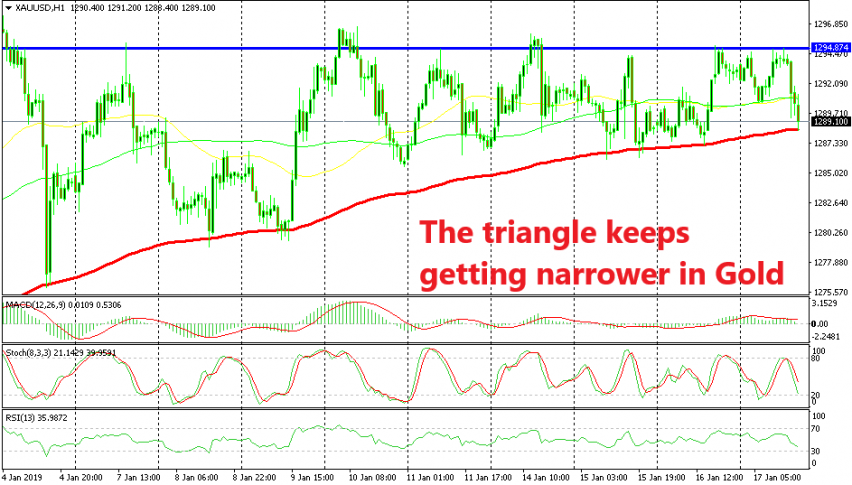 Gold Returns to the 100 SMA As the Triangle Narrows

Bouncing again off the 100 SMA

Gold has formed a ritual in the last two weeks, bouncing higher one session, only to turn bearish in the next one. Yesterday we highlighted the range in Gold, which now looks increasingly like a triangle. Gold has been bouncing inside the triangle for many days now without being able to break at either side.

So, moving averages actually move, hence the name. And this moving average has moved higher and is still doing so, making the triangle narrower every day. This will surely lead to an explosion in one direction. Although, I hope that it happens to the downside since we are short on Gold with a long term trade/signal.

Right now the price is at the bottom line of the triangle, which is the 100 SMA and that is providing support once again. If this H1 candlestick closes like a doji or a hammer, then that would be a reversing signal and very likely Gold will reverse back up again. But, let’s hope that the break comes today.

Check out our free forex signals
Follow the top economic events on FX Leaders economic calendar
Trade better, discover more Forex Trading Strategies
Related Articles
USD Risk Tilted to the Upside, If Powell Disappoints Today
Markets are all pricing in a dovish FED today after raising rates by 25 bps, but Powell might repeat December's comments which will be hawki
2 hours ago