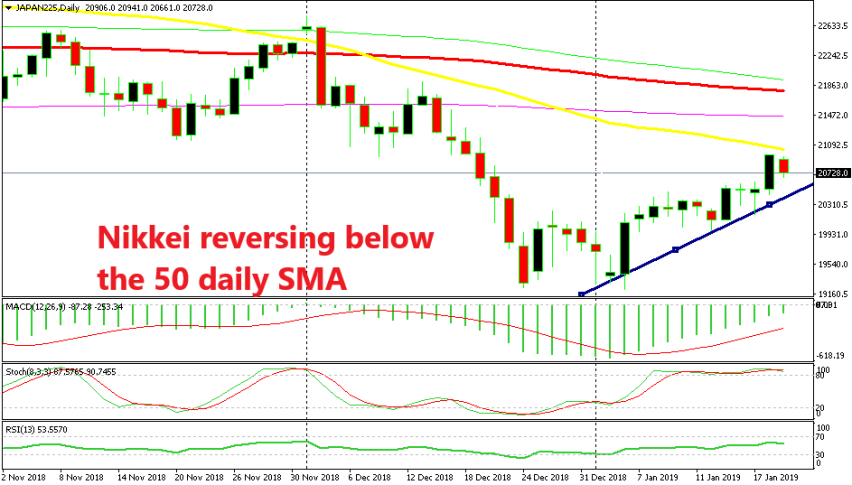 The ascending trend line is the first test for sellers

Stock markets have made a decent turnaround this year after being bearish for most of last year. Although, as I have mentioned before, this move higher is just a retrace of the bigger bearish trend and a bearish reversal is expected anytime soon, because the global economy continues to weaken, Brexit or no Brexit.

In fact, the retrace might as well have already started. NIKKEI225 has climbed for more than 1,000 pips/points since the year started which is a decent pullback. But, it ran into the 50 SMA on Friday. We have also highlighted this moving average before as a target and it seems like it’s working.

The price got pretty close to it on Friday, but buyers got cold feet ahead of it, so now we are seeing Nikkei reverse and slip lower. The stochastic indicator is severely overbought on the daily chart which means that the retrace is more than complete.

Another reason for this bearish reversal today is the economic data from China this morning. The unemployment rate ticked a point higher to 4.9% in China, while the GDP ticked a point lower. Fixed asset investment was expected to tick higher, but it missed expectations. Although we saw a jump in industrial production, it’s not having much impact on markets.

So, the technical analysis, as well as fundamentals are pointing to this reversal. Although, there is the possibility of another attempt higher which I’m waiting for. If that happens and the buyers fail to push above the 50 SMA, then that would be the strong signal I am waiting for to go short on Nikkei.