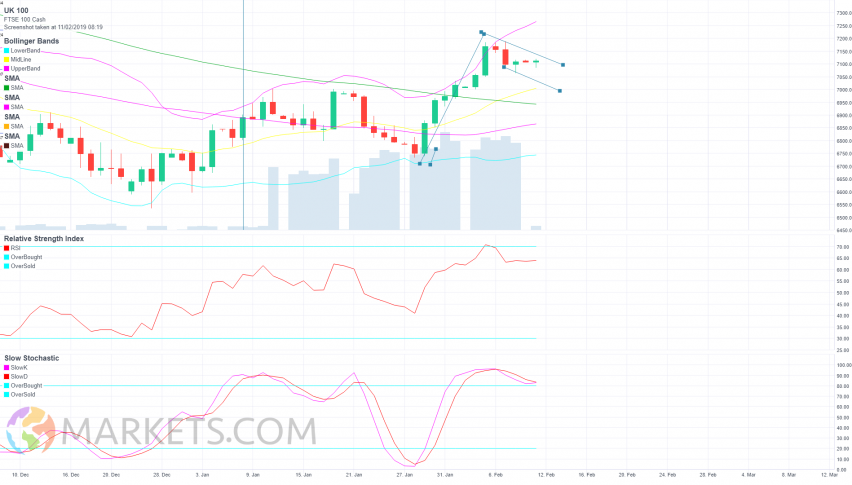 Growth, China, trade, Brexit – the big themes that have been front of mind for months now remain very much in play this week. Stocks likely to be a in holding pattern as US-China trade talks kick off in Beijing. The big guns are out in force this time with Mnuchin and Lighthizer leading the talks , although we won’t get that Trump-Xi meeting.

Iron ore futures, which have rallied hard on Vale’s troubles in Brazil, shot higher again as Chinese traders returned from their prolonged holidays. Dalian prices spiked to a record high – short term speculative positioning seems to be compounding the real supply problems. This would tend to further support mining stocks and indeed we note that basic resource stocks are leading the way.

The FTSE 100 ended lower on Friday, eventually succumbing to a brief rally, to finish the week on 7,071.18. On the open today though the blue chip rallied around 0.5% but upside seems likely to be restrained by the ongoing macro themes that continue to dominate investor sentiment – China, trade, growth. Nevertheless, the 7,100 level is starting to form as a line of support, and we note a potential bullish flag formation forming with the pole extending from the late Jan low at 6730 through to the 7200 resistance. However the over-extension of the rally may well see further retracement.

The positive open comes after Chinese stocks rallied overnight after a long holiday, but Asian shares have been mixed, albeit with Japan closed for a holiday. US stocks staged a late rally on Friday, which was enough to push SPX marginally positive on the day to 2,707.88. It wasn’t quite enough to boost the Dow, which closed down 0.25% for the day, but the late stage optimism was a positive. Having bounced off the 200-day line, the S&P 500 is pulling back but we are yet to see whether this marked a top for the rally or if it’s a temporary pull back ahead of a renewed drive higher by bulls.

Brexit will as ever be a key theme but it looks like we won’t get that Valentine’s Day vote as Theresa May is pushing for more time. It does rather seem like she is trying to bounce parliament into a last minute choice between her deal or no deal at all. As the clock counts down the risk is that the delaying tactics backfire and the UK leaves without a deal.

GBPUSD was last holding steady at 1.293/4, resting on the 23% retracement of the decline since the top last May. Having bounced off last week’s key test on 1.2850 the pound has found some respite but the pressure remains and the momentum is still against it.

Growth concerns weighing on the demand side for oil, but we are also seeing increasing US supply coming on, as anticipated. The US rig count rose again, according to Baker Hughes. Brent oil seems to be building a base on $61.50 – we need to see a return to $60.50, last week’s lows, before bears take back control. We do seem to be heading to the apex of a symmetrical triangle formation on the 1-hr chart that suggests a breakout soon, supported by the narrowing on the Bollinger bands on the daily chart.

Brokers – some lower forecasts for housebuilders will weigh a touch but ultimately the strength for miners from Vale/iron ore is the dominant factor.

Barratt Downgraded to Hold at Liberum