EUR/USD Finding it Difficult to Push the Bullish Trend Above 100 SMAs – Time to Reverse Lower? - Forex News by FX Leaders 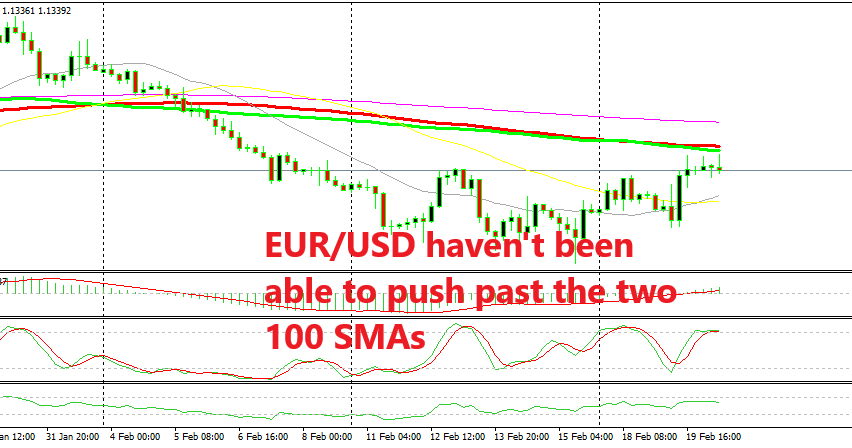 EUR/USD Finding it Difficult to Push the Bullish Trend Above 100 SMAs – Time to Reverse Lower?

EUR/USD has been on a bullish trend so far this week after it made a bullish reversal last Friday on the back of some USD weakness. The sellers tried to reverse the short term trend yesterday as this pair slipped lower during the European session, but the stochastic became oversold on the H4 chart and this pair hadn’t made new lows, which tells us that the trend is up.

The USD went through another wave of selling in the US session yesterday and, as a result, EUR/USD pushed higher to 1.1350s. We decided to go short at that level since this pair became overbought on this time-frame chart, so we sold below the 200 SMA which was providing resistance on the H1 chart.

The price hasn’t made new highs since then and EUR/USD has formed several dojis and pins on the H4 chart. These are reversing signals. Besides that, the 100 simple MA (yellow) and the 100 smooth MA (red) have been also providing resistance on top, so the chart setup now points to a bearish reversal.

The FOMC minutes will be released this evening, therefore don’t expect to see big moves until then, but I hope that we see a pullback at least so we can book profit on this trade before the FOMC minutes.

Can Bad News Be Good News for the Euro, As the World Turns Upside Down?
6 days ago

hello for all i need signal

Well hello, we already have a sell signal in EUR/USD at 1.1340 which we opened yesterday. The price is pretty close to that area so you can take that trade now if it suits you.