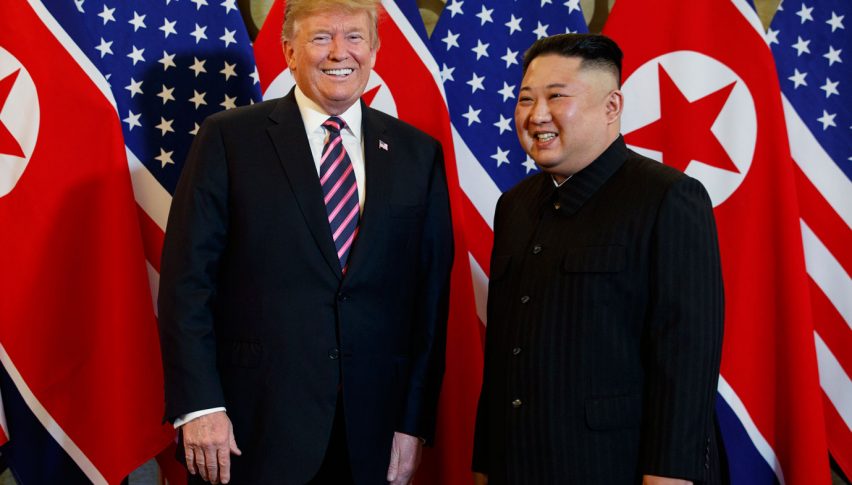 Lots of smiles but no outcome from Trump-Kim summit

Today we had inflation figures being released from Europe as well as some additional economic reports such as French GDP and consumer spending reports, although the market seems more concerned about geopolitics as the sentiment keeps directing prices up and down. Consumer spending made a turnaround in France, growing by 1.2% in January after having declined for two months at the end of last year. It seems that yellow vest protests haven’t hurt the French consumer last month, but the impact might show up in the retail sales report next month.

The economy grew by 0.3% in Q4 2018 in France as expected but inflation fell flat this month at 0.0%, against a 0.4% increase expected. On the other hand, the annualized Spanish CPI (consumer price index) inflation ticked higher to 1.1% as it did in Italy where CPI increased by 0.2% in February from 0.1% last month. The German inflation number will be released later but the regional numbers from Saxony, Brandenburg and Bavaria look really positive. So, odds are that the main German inflation number comes out positive as well.

But as the title suggests, the market sentiment has been driving markets this week. The sentiment is a bit negative and stock markets have retraced lower again during the Asian session driven by geopolitics. Safe havens benefit when uncertainty increases and, as a result, GOLD, CHF and JPY have attracted some decent sized bids. The meeting between Donald Trump and the North Korean leader didn’t produce results last night, and India has declined to negotiate for the release of its pilot, which are keeping the sentiment subdued – sending stock markets lower and safe havens higher.

USD/JPY surged higher yesterday in the US session as this pair bounced from the 100 SMA (green). Although, it dived back down again during the Asian session as market sentiment deteriorated again on more geopolitics which we mentioned in the opening section. But, this time it was the 50 SMA (yellow) which held the decline and after a hammer candlestick, the reverse higher followed. The US GDP report was better than expected and that helped send this pair higher and improve the sentiment. So, the picture has turned bullish for this pair now.

The US GDP report showed a slowdown in economic growth during Q4 last year, but expectations were for a bigger slowdown. That has improved the sentiment in the financial markets, sending safe havens lower and stock markets higher. The USD is also finding some decent bids now and it is reversing higher after being down for a few sessions.

Keeping Our DAX30 Sell Signal, As Stock Markets Reverse Lower on China-US Tension
5 days ago
USD/CAD Remains Bearish, Despite the Jump in USD on Higher US PCE Inflation
The Canadian GDP fell flat in May against a 0.2% decline expected, while the US core PCE inflation increased further last month
1 week ago