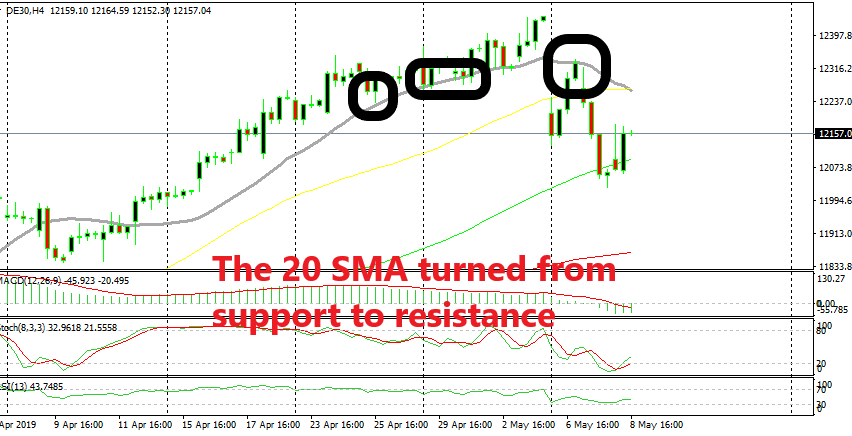 Is the main trend going to shift to bearish?

Stock markets have turned bearish this week, although [[Dax30]] has traded bullish today. But, for the week it is still down and it hasn’t closed the gap which opened during the weekend yet. In fact, the trend seems to be in danger now since the 20 SMA (grey) which used to provide support on the way down, has now turned into resistance.

That’s a common sign when trends usually change. So, that moving average turned into resistance yesterday on the H4 time-frame chart as buyers were trying resume the larger uptrend which started at the end of last December. Dax returned back down after that and lost around 300 points.

But we see today that the 100 SMA (green) is working as support now, even though it has been pierced. The price formed a small hammer candlestick which is a reversing signal and it reversed higher after that. But, markets are pretty uncertain right now due to the escalation of the tariffs war between the US and China, so the pressure will likely remain on the downside until next week. The safest way to trade Dax now is to sell at the moving averages above on retraces higher, probably the 20 SMA and target the lower MAs.

Check out our free forex signals
Follow the top economic events on FX Leaders economic calendar
Trade better, discover more Forex Trading Strategies
Related Articles
Can Stock Markets Resume Decline After the Retrace Higher in July?
We remain short on the German DAX30 index, as it continues to find resistance above at moving averages
6 days ago