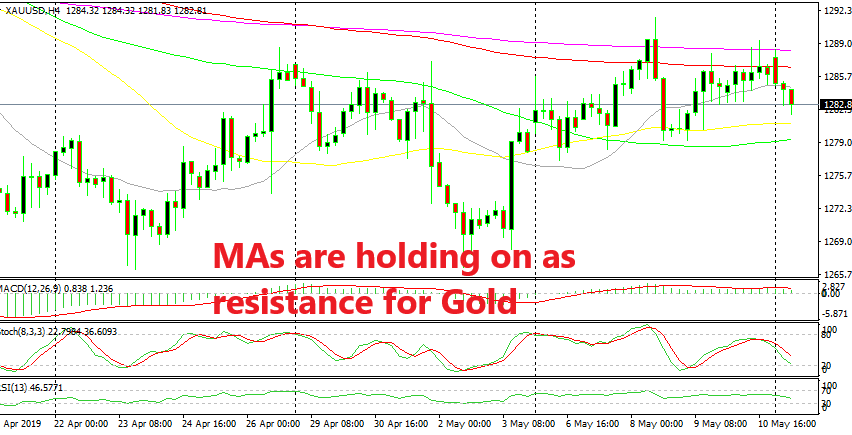 Gold is turning bearish today, despite the worsening sentiment

GOLD has been on a bearish trend since the reversal back in February when it peaked at $1,346. We have seen a perfect Elliott Wave Pattern unfold from February until March on the daily time-frame, with three bigger bearish waves and two smaller retracing bullish waves during that period.

Although since that pattern completed, the sellers have found difficulties making new lows. Gold has formed a bottom in the last two months at $1,266 and it has bounced off of it twice, once at the end of April and once this month. But, the buyers haven’t been able to break above the 100 SMA (red) and the 200 SMA (purple) which stand above.

They pierced these moving averages early last week, but couldn’t hold on to gains and the price reversed back below them. Last week, the sentiment turned pretty negative in financial markets after escalation of the trade war between the US and China, which hurt stock markets and helped safe havens such as the JPY, hence the bearish momentum in USD/JPY.

But Gold only made minimal gains last week. Gold closed the week only $4 higher and, for most of the week, it traded sideways. The 100 and 200 SMAs provided solid resistance, which means that the pressure is still on the downside for Gold. If it can’t climb on negative global sentiment, then it surely will turn bearish once the sentiment improves. This place also looks good for sellers, with a stop above last week’s high.