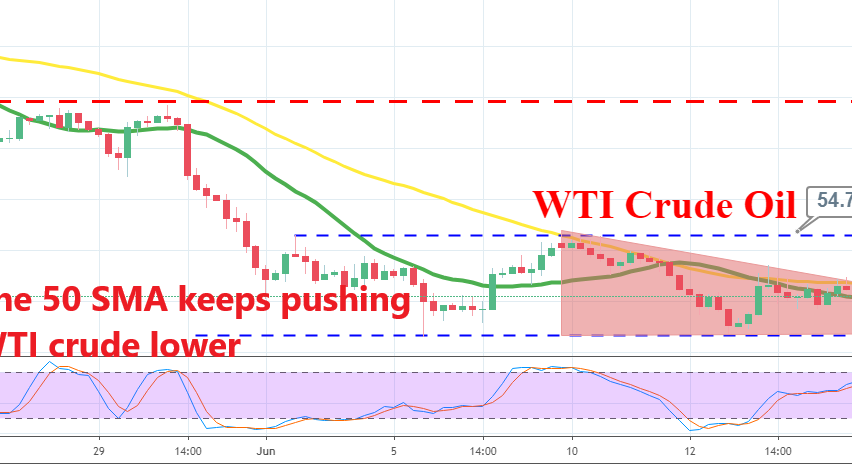 Selling the Retrace in WTI Crude Oil Below MAs

Crude Oil is getting compressed towards the tip of the triangle

Crude Oil turned bearish by the middle of April as the global economy entered another period of weakness after the short lived improvement we saw in the first few months of this year. The trade war also precipitated in the coming weeks, which gave Oil traders another reason to turn bearish after being bullish for the first 3-4 months of this year.

Sellers broke below the $60 level towards the end of May, which had formed some form of support for WTI crude Oil. The downtrend picked up pace after that and US crude lost nearly $10 after that, but the decline stopped above the $50 level, which now seems like a support are has formed down there.

Although, buyers can’t get their act together as they have been getting crushed on every retrace higher. The highs have been getting lower for crude Oil, which means that the downtrend is still in place and a triangle has formed, as you can see from the H4 chart above. The 50 SMA has been pushing the price lower in the last two weeks as it slides lower.

The 20 SMA (green) has also been helping and it seems like it is providing resistance again for US WTI crude now. Shifting to the H1 chart above, we see that the 50 SMA provided support for Oil last week as the price retraced higher, but now the price is back below the 50 SMA and this moving average is providing resistance again. Stochastic is almost overbought on this time-frame, so we decided to short WTI crude as the global economy weakens, which demises the demand for Oil.