AUD/USD Facing the 50 SMA on the Daily Chart Ahead of the 0.70 Level - Forex News by FX Leaders 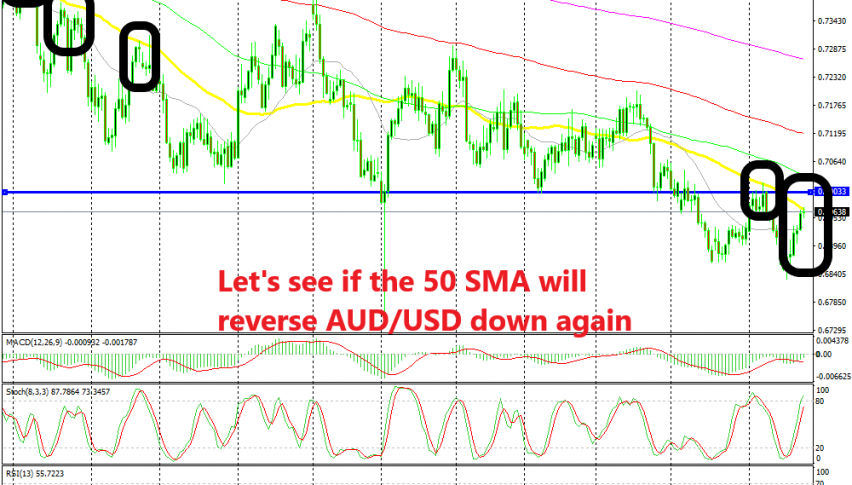 AUD/USD Facing the 50 SMA on the Daily Chart Ahead of the 0.70 Level

The 50 SMA has provided resistance many times before

AUD/USD has been trading on a constant downtrend since early last year. The trend used to be quite strong in the first half of last year, but it lost pace since Autumn. We saw a flash crash at the beginning of this year as this pair dived around 300 pips, but that was due to thin liquidity.The price retraced back up that same day and the downtrend resumed its normal price action.

This pair formed a bottom at 0.70 which held as support for many months since October last year, apart from the brief piercing, but that support was finally broken last month as the trade and geopolitical tensions increased again, which hurt the sentiment and in turn, it hurt risk currencies such as the Aussie.

The slowdown in the global economy is also having a negative impact on the Aussie and the Reserve Bank of Australia was forced to cut interest rates in the last meeting, which wasn’t the last move since they said that they will follow the FED in the coming months/years.

But, the USD has turned pretty bearish in the last week and this pair has retraced higher. Now we are facing the 50 SMA (yellow) on the daily chart. This moving average provided resistance at the beginning of this month and AUD/USD is finding some sort of resistance again at the 50 SMA now.

The stochastic is also overbought, which means that the pullback is complete. Around 30 pips higher, we have the previous support at the big round level at 0.70. So, this looks like a good place to look for a reversal and probably a long term sell signal from around here, with a stop above 0.70. But, we have to get a confirmation such as a pin/doji candlestick before pulling the trigger.