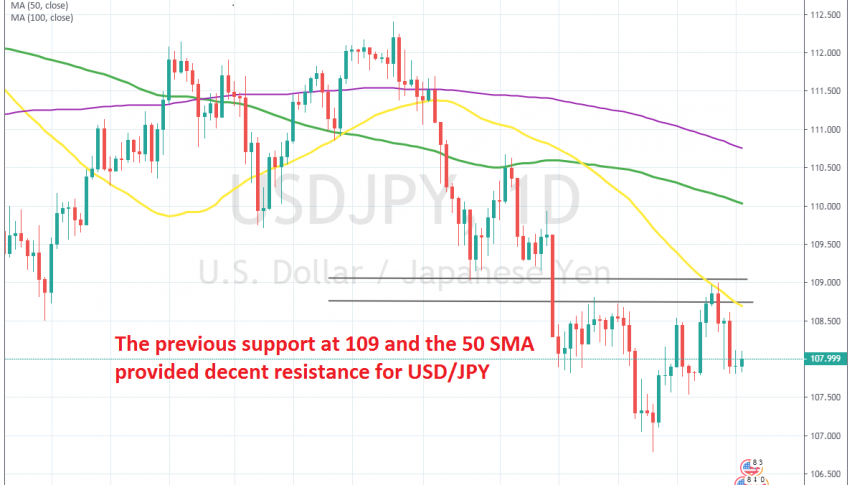 The Pullback Ends at the 50 SMA for USD/JPY

Sellers are back in control in USD/JPY

USD/JPY turned bearish at the end of April after the trade tensions between the US and China escalated again, which turned the sentiment in markets really negative. Safe havens attract heavy bids during such times when uncertainty is high and the JPY surged, together with []Gold]] and the CHF, sending this pair nearly 600 pips lower until the end of July.

Although, the sentiment improved after the G20 summit which took place at the end of June and this pair reversed higher. The bullish momentum continue for the first two weeks of this month, until Wednesday last week when the price reached the 50 SMA (yellow) on the daily chart.

That was the time FED Chairman Powell made some quite dovish remarks which hurt the USD, so once again, fundamentals and technicals coincide at the same moment and go in the same direction. The 50 SMA came at 109, which is where the reverse came and now USD/JPY is around 100 pips lower.

Now the sellers face a few support levels below if the downtrend is to continue, but the most important one comes at 106.80. I would like to go short on this pair, but I am hoping for a retrace higher to the 50 SMA again, which would be a great place to short USD/JPY.