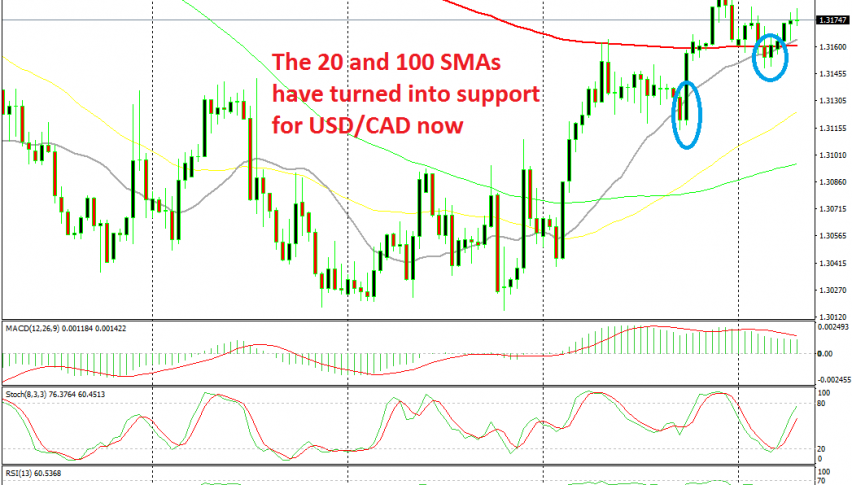 USD/CAD Trying to Resume the Uptrend After the Pullback Lower

The bullish reversal happened overnight for this pair

USD/CAD turned pretty bearish in June, as Crude Oil prices climbed more than $10 higher on increased geopolitical tensions and other fundamental events. USD/CAD lost more than 500 pips during June, but the decline stopped above the 1.30 level, which seems to have formed a strong support area around it.

In the first two weeks of this month, USD/CAD consolidated above 1.30, but in the last two weeks, we have seen a bullish move in this pair. USD buyers have returned and they have pushed the price nearly 200 pips higher. Last week the price found resistance at the 100 SMA (red) on the H4 chart and retraced lower, but the pullback ended around the 20 SMA (grey).

The price turned bullish again and the buyers eventually broke above the 100 SMA. In the last few days we have seen another retrace lower for this pair and yesterday we decided to go long on this pair as the H1 chart became oversold. Sellers continued to push lower, but the decline ended at the 20 SMA once again.

The 50 SMA aided in providing support as well and the stochastic indicator was oversold, so the retrace was compete. Today, USD/CAD has been climbing higher again and is now on a bullish momentum. We are long on this pair since yesterday, so we are holding on to our trade.

Will We See A Pullback in Ripple (XRP) This Week?
21 hours ago

Oil Prices Remain Supported, After the Cyberattack on US GAS Pipelines
24 hours ago